Wroclaw, the Polish city that English speakers struggle to pronounce (it’s vrots-waf), is currently the European Capital of Culture, and in 2016 it is also hosting the Theatre Olympics and European Film Awards. But the economy of the surrounding Lower Silesia region of Poland is driven not by culture but by the mining activity that takes place 85 kilometres to the north-west, around the small town of Polkowice.

A world away from the cultural attractions of Wroclaw, Polkowice is home to around 20,000 people, but it is eerily quiet during the daytime. That’s because 6,000 people disappear underground every day to work in the Rudna mine a few kilometres north of the city, with thousands more involved in the production process. Together with neighbouring operations Lubin and Polkowice-Sieroszowice, Rudna mines one of the world’s biggest deposits of copper.

The safety, savings and productivity balance

Producing 12 million tonnes of copper ore per year, the Rudna mine is the largest copper mine in Europe and one of the largest deep copper ore mines in the world. It’s also one of the best-designed mines in the European region. Construction began in 1969, and the five-year project took learning and best practices from the previous decades of mining in the region.

Driven by continued demand from the telecommunications, power and construction industries, Rudna’s mine life figures to extend another 40 years. But the price of copper on global markets has fallen by more than half from its 2011 all-time high, putting increasing pressure on copper producers like KGHM to uncover cost savings while maintaining the safety of the miners as the depths at Rudna plunge ever deeper. The newest expansion of Rudna to the valuable Deep Głogów copper ore deposit could reach depths of 1.5 kilometres.

Typically made up of 78 percent sandstone and dolomite, the tough material is loosened by drill-and-blast before being screened and hauled to the surface. Each year, the lone concentration plant produces around 1.9 million tonnes of concentrate with 23 percent copper content.

“With the current price of copper so low it means we are close to the break-even point, so keeping production costs as low as possible is our biggest challenge,” says Tomasz Kras, one of the maintenance superintendents at the Rudna mine.

“As we go deeper, the conditions become more difficult and unpredictable, and the cost of providing air conditioning, ventilation and safety systems is higher. It is a challenge for us every day to keep the cost as low as possible, but safety can never be compromised, so we look to the mechanized equipment for cost savings.”

An obvious savings opportunity for KGHM was the lifetime of lip plates on its underground loaders, which quickly wore out and frequently cracked due to the hard rock and difficult conditions. As KGHM looked outwards to its supplier base and even to local suppliers for help, Sandvik answered the call with a total bucket concept for Sandvik LH517 loaders. Although they came at a higher initial investment than competing solutions, KGHM chose the integrated bucket ground engaging tool (GET) solution from Sandvik for its ability to deliver superior cost-efficiency over the long term.

The company, which is 31 percent owned by the Polish government, employs more than 30,000 people worldwide, of whom around 18,000 are directly involved in production.

KGHM is celebrating its 55th year of operation. Established in 1961, the company was formed by the coming together of mines in the copper belt of south-west Poland, where the Rudna mine would eventually open in 1974.

“The total bucket concept focuses on four key areas,” explains Lukasz Niemasz, GET product line manager at Sandvik for Europe, North and West Africa. “Cast corners add strength and high wear protection to the exposed corners of loader buckets, often the first area to suffer from wearing and cracking. The hammerless design of the locking system allows for quick swap-outs of individual shrouds and easy retensioning of the shroud against the bucket lip. Heel shrouds and protector strips minimize the exposure of the bottom of the bucket shell, while our integrated Sandvik CPB system offers additional protection of the primary lip.”

Over and above the direct long-term savings in extended bucket life, productivity improved by maintaining the bucket’s form over a longer period, leading to an increased tonnes-per-shift ratio.

“The GET solution was brought to Rudna at a time when the mine had a problem with bucket lifetime,” Niemasz says. “We presented a solution that would reduce maintenance costs over the long term, but would also benefit production by offering an overall bucket size of 8.4 cubic metres. Geometry over the life of a bucket is key to maximizing productivity.”

Rudna’s 11 shafts provide ventilation and transport to the 6,000 workers spread over the 78-square kilometre underground city. A trip through a maze of dark tunnels reveals the well-lit C1 maintenance area, one of several that service the equipment used throughout the Rudna mine. The man charged with keeping an efficient maintenance operation running is Rafal Brzezicki, the deputy maintenance manager for the C1 maintenance area. As well as doing regular service and repair work, his team run checks on equipment including Sandvik loaders between every shift.

“Our biggest challenges down here are caused by the conditions in which the equipment is used in this division,” he says. “We struggle against water and mud getting into the machines and causing problems.”

Brzezicki explains that the introduction of the Sandvik GET system has resulted in identifiable cost savings in both the short and long term.

“We no longer need welders to repair loader buckets,” he says. “It used to be common practice to use welding for major renovations but also for minor repairs. Cracks appeared regularly, and the buckets used to crack. Every six months we had to replace lip plates or weld other lip protections. This made our work difficult because we needed a permanent welder and lots of equipment.

The welder used to have lots of work, but now we almost forget about replacing or repairing buckets. The repairs take place after 12,000 to 13,000 hours. In the past, we would have replaced the bucket at least three times within that same period.”

KGHM began using Sandvik equipment nearly 20 years ago. Over the years, that relationship has become a partnership, and Brzezicki now has several Sandvik employees working on his team on a daily basis.

One of them is Lukasz Rodowski. Among his duties, he maintains the 50-millimetre Heavy Duty Series 2 lip shrouds on Sandvik LH517 loaders, but he also passes on best practice to the operators.

“We try to help our customer understand how to avoid breakdowns,” Rodowski says. “We stress the need for prevention as a way to reduce costs and keep the equipment working as long as possible.”

Replacing a shroud is a relatively straightforward task for maintenance engineers. Each shroud slides over the lip and is held in place with a simple locking pin and cap screw. “The Sandvik solution is ideal for maintenance,” Rodowski says. 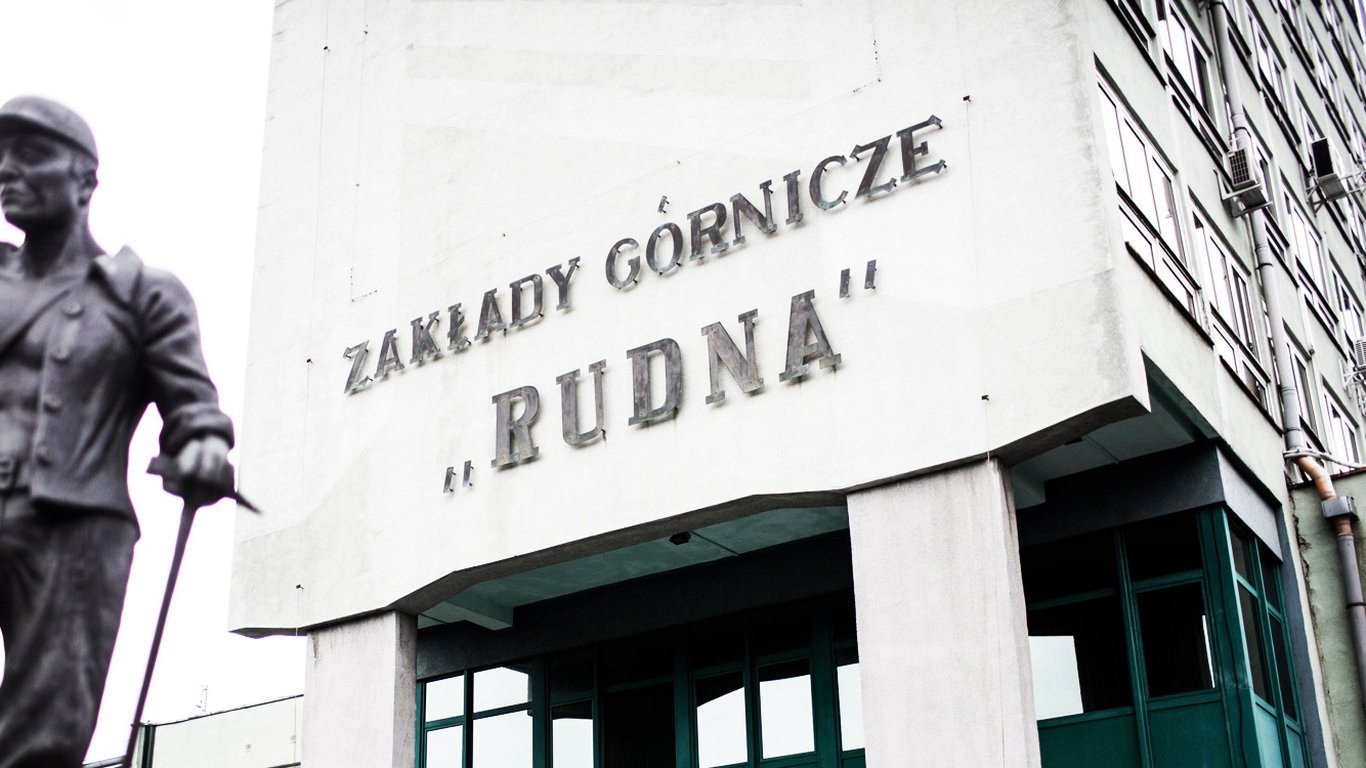 Rudna represents one of the largest copper reserves in Poland, estimated at 513 million tonnes of ore grading 1.78 percent.

The Sandvik team develops new features based on feedback from the KGHM maintenance staff.

“Replacing the GET wear parts is straightforward compared to fixed parts such as rippers offered by competitors. GET removes the need for welding, and there’s no time lost to assembly.”Niemasz explains that new features are developed by Sandvik product teams based on feedback from maintenance staff.

“Because our colleagues spend so much time in the mine cooperating with KGHM staff, we understand the challenges, such as the need to replace the corner shrouds more often than the others during the lifetime of the set,” Niemasz says.

“To make life easier for the operators we have wear indicators built into each shroud that notify operators when the shroud should be replaced, reducing the likelihood of costlier damage to the lip or the bucket.

“We are constantly striving to improve our product to help customers such as KGHM meet their cost challenges. We listen to the feedback of our customers not only from the cost perspective of senior management, but also about the best possible set-up of the shrouds and the bucket from the maintenance engineers.”

As part of an integrated bucket ground engaging tool (GET) solution, the mechanical lip system allows for quick maintenance, whether replacing or retensioning. The high-strength, high-hardness alloy provides high resistance to wear, resulting in a lower total cost per tonne. KGHM uses Sandvik GET 50-millimetre Heavy Duty Series 2 lip shrouds on its fleetof Sandvik LH517 loaders. In total, 21 Sandvik LH517 units and five LH209 units are in use at Rudna. Sandvik also supplies a team of engineers fully integrated into the KGHM maintenance teams.