Noise is a constant presence in today’s industrialized world. With regard to rock excavation and processing, the key question is how to minimize the potentially significant health impacts on operators and other worksite personnel as well as people in surrounding communities.

More than half of the global population and three out of four EU citizens currently live in urban areas, exposed to high levels of noise, or “unwanted or harmful outdoor sound created by human activities,” as defined in the EU’s Environmental Noise Directive. Besides being a nuisance, noise is linked to several direct and indirect health impacts. Sleep disturbance caused by night-time noise in particular has negative effects on health.

According to the World Health Organization (WHO), the onset of such impacts can be detected in people exposed to night-time noise levels of more than 40 decibels – a fairly low figure, considering that normal conversation typically causes a noise level of around 50 or 60 decibels. Health impacts linked with noise include all kinds of ailments ranging from cardiovascular disease to psychological problems. According to the European Commission, noise can be associated with an estimated 70,000 hospital admissions and 16,000 premature deaths per year in Europe alone. Indeed, the WHO categorizes noise as the second‑worst environmental cause of ill health, surpassed only by ultra‑fine particulate matter air pollution.

In other words, noise is not a second-rate problem of minor significance. What can we do about it then? More specifically, what can mine managers, quarry operators and drilling contractors do to reduce the noise emissions from their surface drilling equipment?

The key points in any noise problem, and consequently the factors that any control measure needs to have an impact on, are the source, the transmission path and the receiver. A mine owner or a blasting contractor obviously has little or no control over off-site prevention measures – it is not feasible to make people in the neighbourhood stay indoors or use hearing protection. The drilling crews and other worksite personnel are of course responsible for using correct working methods and personal protective equipment. In other words, the most practical mitigation options are at the source and in the transmission path.

A surface drill rig is a challenging application in terms of noise mitigation because it is very difficult to design the rock drill,

The A-weighting filter referred to in the noise measurements of this article is a method designed to filter sound energy across the frequency spectrum audible to humans in such a way that the measurement results correspond more realistically to the sensitivity of the human ear to sound. Due to the logarithmic nature of the decibel scale, changes that may seem insignificant at face value are actually rather substantial; for example, the NoiseGuard-DXi silencer can reduce the sound power emitted from the rock drill by eight decibels, which means that the absolute sound level is just 16 percent of the non-mitigated value.

by far the most significant source of noise, in a way that would effectively dampen the loud noise emitted during drilling.

“We have looked into this a lot with Sandvik,” says Lasse Lamula, a senior scientist at the VTT Technical Research Centre of Finland, a research institution with which Sandvik cooperates closely. “Our conclusion is that it is very difficult to effectively reduce the noise level from the rock drill. The drill rod in particular emits a lot of noise all-around. The issue is that making the rock drill robust and durable on one hand and reducing noise on the other are conflicting goals. Generally, what you try to achieve in mechanical engineering is to reduce the surface vibration levels of the machine components, but in rock drills this is very difficult to accomplish.”

This leaves the third option, reducing noise along the transmission path. Practically this means isolating the rock drill and rod handling system inside an effective noise-suppressing structure. But even this is complicated because designing such a structure is also not a simple task.

”The reductions in sound power we have measured are truly astonishing, considering the relatively simple structure of the silencer

“There are so many parameters that you need to factor in,” Lamula says. With an example from the recent Sandvik NoiseGuard-DXi project, he mentions that the noise levels emitted directly in front of the rig were clearly higher than in other directions and no clear explanation for this was found, even though the matter was examined closely.

Improvements to the silencer design did not result in any substantial results. The mass of the enclosure wall structure is the most crucial factor, as a heavier structure mitigates sound more effectively. But again, there is a competing requirement to make the silencer as light as possible. Furthermore, it is problematic to make a light structure rigid to reduce resonance and at the same time minimize sound radiation efficiency.

One key goal is to maximize the absorption of sound inside the silencer structure by using optimal materials, which is something Lamula credits Sandvik silencer solutions with. “It seems to work incredibly well,” he says. “The reductions in sound power we have measured are truly astonishing, considering the relatively simple structure of the silencer. Furthermore, the subjective sensation that a drill operator hears when using the rig can be even more significant, compared with the measured values.” 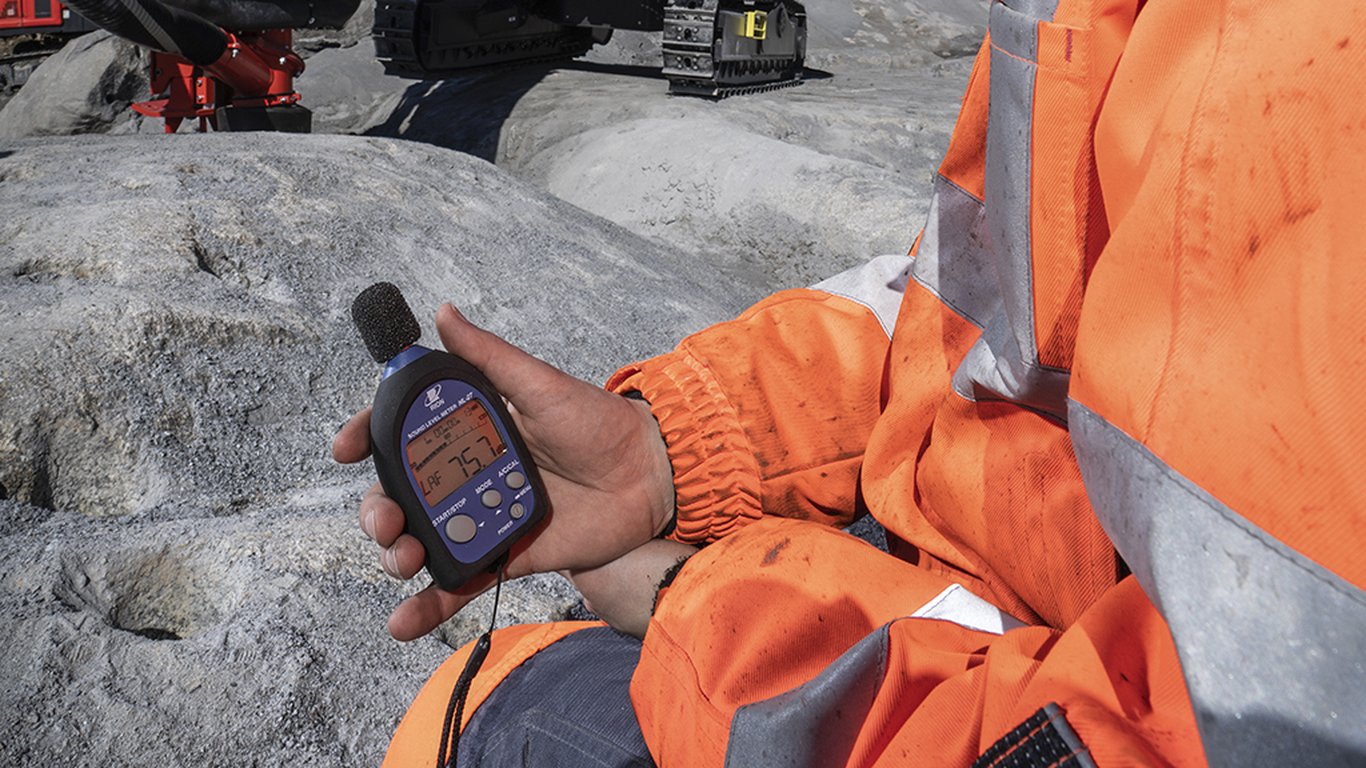 The NoiseGuard-DXi silencer can reduce the sound power emitted from the rock drill by eight decibels, which means that the absolute sound level is just 16 percent of the non-mitigated value.

The product range from Sandvik Mining and Rock Technology includes several effective solutions that can significantly reduce the noise levels of surface drill rigs. A solution called NoiseGuard-DX has been available for Ranger DX series top-hammer drill rigs for several years. The new Ranger DXi series rigs can be equipped with an upgraded solution, called NoiseGuard-DXi, which is a fully enclosed structure and provides at best close to 10-decibel noise reduction in the A-weighted sound pressure level around the rig.

The NoiseGuard-DXi option integrates effective noise suppression with the latest usability features such as a camera system to provide excellent visibility inside the silencer enclosure even with closed doors as well as a single-bolt dismantling design for fast and easy maintenance on the feed system. A third solution, called NoiseShield-DC, is a simple, compact solution for the smaller, cabinless Dino DC410Ri drill rigs. While not a fully enclosed structure like NoiseGuard-DXi, NoiseShield-DC still effectively reduces noise levels by directing the drilling noise upwards through an open top, away from the operator and surrounding areas.

Companies active in the quarrying and mining industries are becoming increasingly aware of the significance of noise emissions. One example is Suomen Räjäytyslouhinta Oy, a Finnish blasting and excavation contractor active in a wide range of quarrying, civil engineering and building construction jobs. “We no longer welcome rigs without silencers,” says Jyrki Peltola, managing director of Suomen Räjäytyslouhinta. “Silencers have a notorious reputation for being problematic, but that’s just idle talk. I would say go and ask any driller here and they will tell you it’s no problem. It doesn’t affect drilled metres, comfort, nothing. It has many benefits besides just noise reduction. It also affects the amount of dust. The drill operator is also able to work longer in a more pleasing work environment. And of course nowadays, silencers are being called for in city contracts. It’s the future.”

One of Sandvik Group’s sustainability targets for 2030 is presented under the heading ‘People’: the company aims for zero harm to people, regarding both its own operations and those of the customers. In terms of customers, this means that health and safety improvements are an integral part of all product development projects. Furthermore, health, safety and risk analyses must encompass all products and services.