Sandvik’s Load and Haul Business Unit BHEV (Battery and Hybrid Electric Vehicles) has launched the latest equipment model featuring its third-generation battery-electric vehicle (BEV) technology. Essentially, this means that the vehicles are designed and built to be battery-driven from the ground up, instead of retrofitting battery-electric components into a vehicle initially designed as a diesel loader or truck. This core philosophy is also evident for the new Sandvik TH550B truck.

Launched at MINExpo International 2021 in Las Vegas, Sandvik TH550B is rated for 50 tonnes of load capacity and features the same battery technology as its loader sibling. Its predecessor, the Z50 BEV truck, was introduced in 2019 and has already achieved notable success in North American mines.

“This was the first machine we launched with this battery-swapping feature,” says Brian Huff, vice president of technology, BU BHEV. “It has definitely been a big value for customers. It really helps enable early deployments in large mines because you can run these trucks without a big investment in infrastructure, which reduces risk. Then, of course, swapping batteries is much faster than charging batteries, so it’s a real benefit from a productivity standpoint as well.

“You can swap batteries in less than 10 minutes,” he says. “Charging a battery in 10 minutes creates lots of heat and requires really high-power infrastructure in the charging system, plus all the strain on the underground electrical system. It’s prettyintense.”

According to Huff, the new Sandvik TH550B is essentially a reinvented, third generation Z50. Featuring the same 50-tonne capacity, the proven driveline, frame structure and battery swapping system remain essentially unchanged. But the vehicle control system is entirely new. It runs on Sandvik control hardware, creating commonality with other Sandvik vehicles, including maintenance tools, data collection set-ups and compatibility with the My Sandvik customer portal.

Sandvik TH550B not only matches the familiar Sandvik livery, but it also has the same modern, ergonomic low-noise cabin as Sandvik TH545i truck, improving safety and reducing operator fatigue.

Merging the strengths from both preacquisition Artisan and Sandvik technologies creates two levels of commonality in Sandvik TH550B trucks. One is the battery-electric power system, including AutoSwap, a patented self-swapping system, and the other is AutoConnect, an automatic connection and disconnection function for the battery pack, which makes it possible for the operator to stay in the cab during a battery swap. The functionalities are similar in all Sandvik vehicles with Artisan roots and in pre-acquisition

Artisan vehicles. Any mine with an existing fleet of Sandvik LH518B loaders or Artisan trucks can easily integrate this new truck into their operational practices.

Another level of commonality comes from the advancing integration of the parts infrastructure and support services with existing Sandvik designs and maintenance procedures. This, combined with new investments in Sandvik support services, also significantly increases the maturity of the machine for global markets. 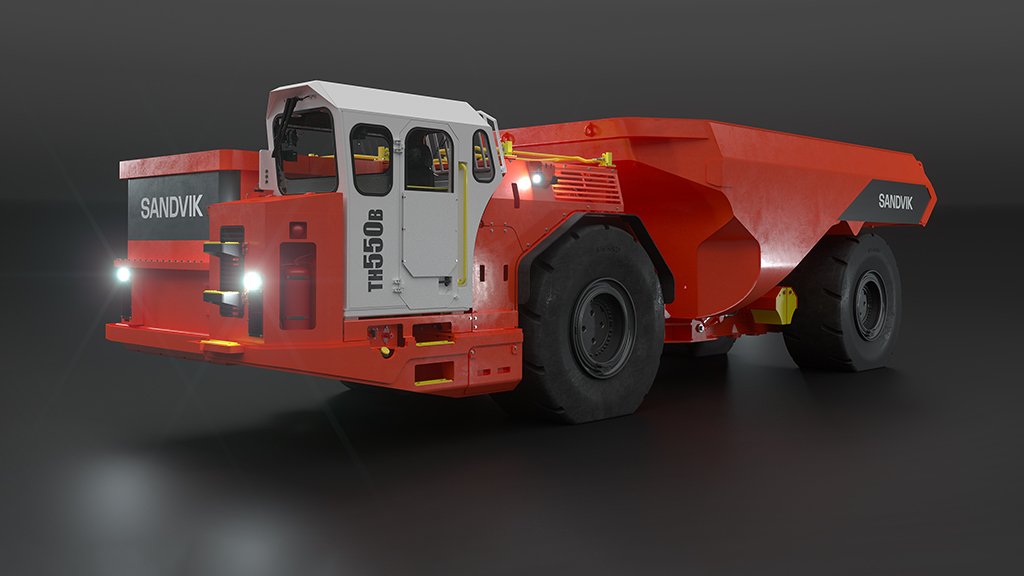 “I’ve been privileged to lead the first Sandvik BEV truck project, combining the 50 years of expertise we have in Toro loaders and trucks with the third-generation BEV truck design by our innovative team in California,” says Sampo Peltola, project manager at Sandvik Mining and Rock Solutions. “We started by having a small engineering team from Finland on site in California to get to know the colleagues and familiarize themselves with the leading BEV products in the market.

Then building on the strengths of our team and through cooperation, we have been able to continue the work remotely between the teams in Finland and California, despite the 10-hour time difference.

“We have actually been thinking of that as an opportunity, as we could say there has been engineering work done almost around the clock,” he says. “This is clearly the next step for Sandvik in our leading BEV offering, ultimately targeting and exceeding our customers’ expectations of more sustainable underground mining solutions.”