The EU-funded underwater mining project ¡VAMOS! continues to prove that conventional thinking can be overcome through canny collaboration and an innovative approach to an age-old problem.

An open-pit mine might be flooded for a variety of reasons, from failures in the dewatering process to groundwater filling it up. Accessing the minerals after flooding, however, has always been impossible due to an obvious hurdle: namely, thousands of litres of water standing in the way. That is, until now. During the second trial of the Viable Alternative Mine Operating System project, or ¡VAMOS!, in October 2018, the 16 European companies collaborating to make the project a reality demonstrated that hurdles are meant to be cleared. The goal of ¡VAMOS! is to build a scale-sized prototype underwater mining vehicle to show that mining in flooded open-cast mines is not only possible but economically viable. Part of the EU-sponsored, 80-billion-euro Horizon 2020 programme, ¡VAMOS! continued with its field testing phase at the flooded Magcobar mine pit in Silvermines, Ireland.

“We’re pushing everything to its limit here,” says Paul Arthur, project manager at Soil Machine Dynamics (SMD), of the ¡VAMOS! trial phases. SMD integrated the industrial partner hardware at its facilities in the UK to build the actual prototype. “We’re getting into beyond what we know right now, but that’s the reason for the trial and why we’re here.” Indeed, the second trial is time to find out what the prototype can do. “We had our first trial in Lee Moor, testing it at a kaolin mine, which is a very soft material,” says Jenny Rainbird, senior research project manager for BMT group, project coordinators of ¡VAMOS!. “Coming here to Silvermines, we really wanted to test the cutting ability of the machine, how much material we can process and cutting volumes, amongst other things. So we’re cutting much harder rock here at this mine.” That’s where Sandvik Mining and Rock Technology’s contribution comes in.

For the prototype mining vehicle, Sandvik has provided the chassis and back stabilizer along with the cutting arm, cutter gears, cutter motors and, most importantly, the cutting head. “We supplied a 150-kilowatt hydraulic-driven cutter head, the MA620, which is the ideal tool in this power class when it comes to cutting of stronger rocks,” says Uwe Restner, product manager, Roadheaders and Digitalization, Sandvik Mining and Rock Technology. “Here at Silvermines we want to close the loop and engage the mining vehicle in hard rock formations so that we can basically interpolate between the softer and harder rock to get a complete picture about the cutting ability of the prototype.” Walter Riegler, service technician, Sandvik Mining and Rock Technology, says Sandvik brought four different types of cutting picks with different tungsten carbide inserts for the trial.

“The reason we supplied different inserts is to test the capability of the cutter under water, as we don’t know what we’ll encounter down below,” he says. The overall system is both complex and simple: complex due to the many different state-of-the-art technologies working together to accomplish a completely new application; simple because, at the end of the day, it’s open-pit mining without some of the typical considerations such as dewatering costs, blasting, ground vibration, dust or people in the mine.

The process works like this: the underwater mine environment is mapped by EVA, a complementary system to the mining vehicle. EVA is a unique robot built specifically for the  ¡VAMOS! project by INESC TEC, a research institution in Portugal. EVA works while the prototype vehicle is cutting to continuously update the map in real time, moving autonomously on the surface and under the water body, using acoustic sonar, a camera and lasers to provide 3D images of the submerged environment to the control cabin. The mining vehicle is controlled remotely at the control cabin on land. This is where all the real-time data generates a virtual reality image of the operations underwater. The control cabin is also where the human-machine interface occurs, and operators manoeuvre the mining vehicle into cutting position. 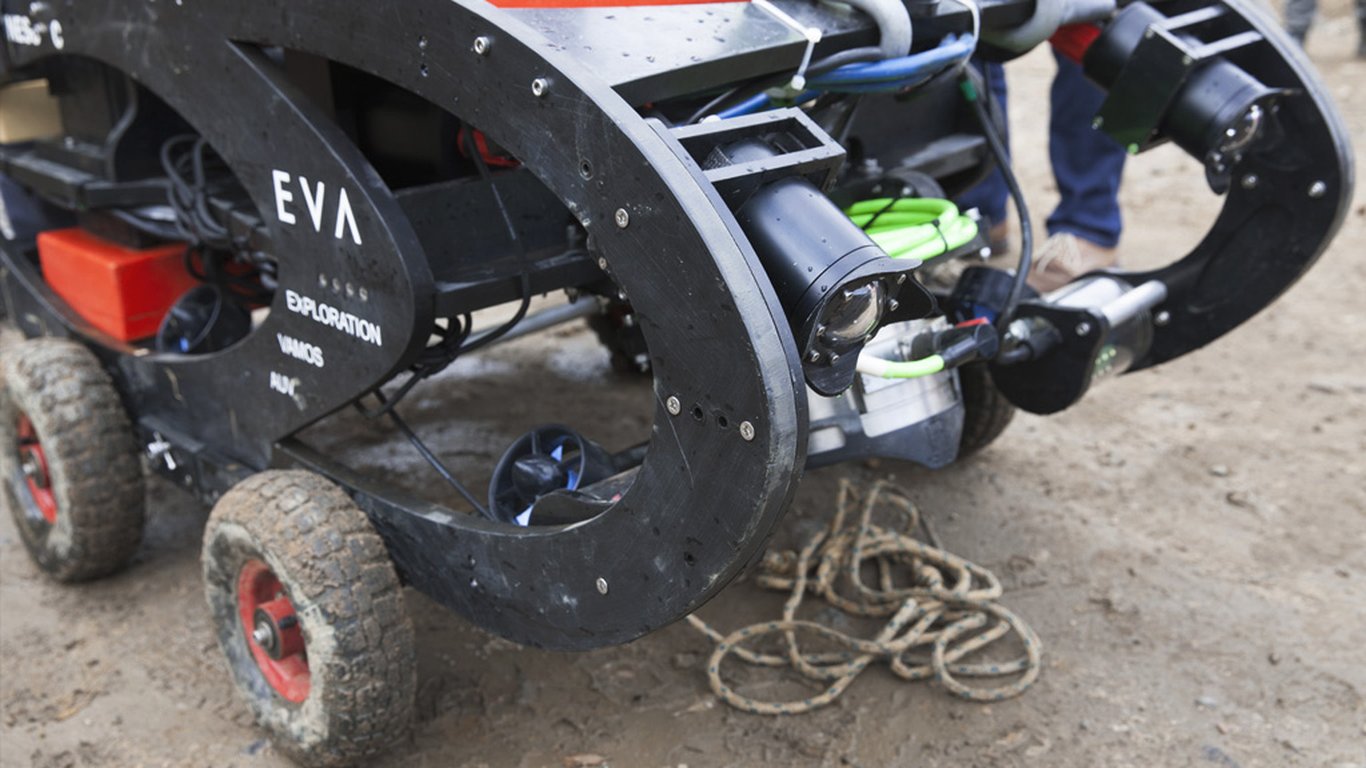 EVA, a unique robot built specifically for the  ¡VAMOS! project by INESC TEC, moves autonomously on the surface and under the water body, using acoustic sonar, a camera and lasers to provide 3D images of the submerged environment to the control cabin. 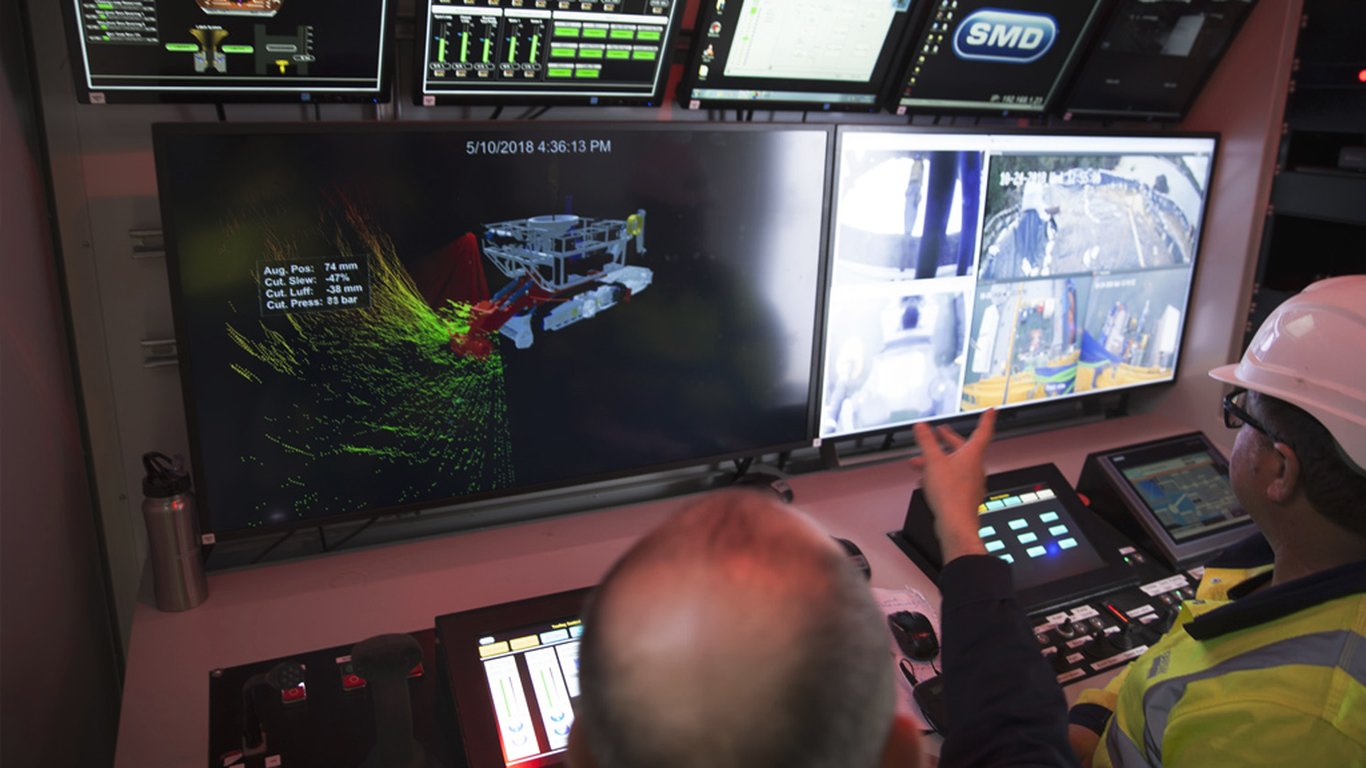 The control cabin is where all the real-time data generates a virtual reality image of the operations underwater.

Once an area is chosen to begin cutting, the Launch and Recovery Vessel (LARV), which carries the mining vehicle on the water, moves to the specified location using four winches anchored to land. The LARV, designed and built by Netherlands-based Damen Dredging Equipment, can then lower the mining vehicle through the water to the mine floor, after which the vehicle can be positioned to begin cutting. Once cutting starts, the material that has been excavated from the mine floor is sucked to the surface and pumped to the dewatering facility onshore where the slurry is deposited. The project has not been without its challenges, particularly when you consider that 16 different companies from nine countries are providing input for the creation of completely novel equipment working in a new application. “When you have different suppliers and when you merge the parts to make new equipment, then basically you have to make sure that everything fits together,” Restner says. “So this was more or less the biggest challenge, but you see, the machines, the equipment, they’re all operating, so we were able to get it done.” Rainbird concurs: “Everybody has really pulled together. Many of the components have been manufactured in different locations and then brought together to be assembled on site. It’s really been a collaborative effort.

”We’re getting into beyond what we know right now, but that’s the reason for the trial and why we’re here

“The collaboration with Sandvik has been excellent,” Rainbird says. “They’ve provided the cutter head, obviously ensuring that it fits in well with the whole design of the mining vehicle. They’ve also been very instrumental in making sure that the whole mining vehicle itself, all the components, work together. They’re a key partner in the project, so it’s been great working with them.”

The viability of the project for underwater mining isn’t the only use being determined during the ¡VAMOS! project. The components can be used separately for different applications outside of mining. Rainbird says: “The results of the research and new technology can be used for seabed mapping, investigation for water sampling, defence, not to mention in underwater sewers or clearing submerged tunnels.” ¡VAMOS! is scheduled to finish at the end of January 2019, and the partners want to ensure that everyone gets the most out of the endeavour. “We’ve all agreed to see how we can take this forward to make the best of the prototype, and take this into a commercial venture,” says Rainbird.

Horizon 2020 is the biggest EU Research and Innovation programme ever, with nearly 80 billion euros of funding available over seven years (2014 to 2020), in addition to the private investment that this money will attract. It promises more breakthroughs, discoveries and world firsts by taking great ideas from the lab to the market.