PORT-DANIEL– GASCONS, QUEBEC. An unfortunate equipment breakdown proved to be a silver lining for the limestone quarry at Quebec’s newest cement plant.

The location is as ideal as it is idyllic. Limestone from the quarry feeds a modern plant that can produce 2.3 million tonnes of cement each year. Conveyors in closed galleries carry finished cement from silos to the deep-water marine terminal just offshore, where a fleet of ocean vessels with capacities up to 60,000 tonnes transport cement to distribution hubs along the Atlantic coast.

The greenfield industrial complex became the first new plant to serve eastern Canada and the north-eastern United States in more than 50 years when it opened in 2017, and increased demand for its products has already driven McInnis to add storage silos at its Quebec plant and increase distribution infrastructure throughout the north-east.

That increased demand keeps the pressure on quarry director François LeMoal and his colleagues.

“Like all cement plants, the heart of our plant is the kiln,” he says. “The kiln is heating at more than 1,400 degrees Celsius. We don’t want to stop it to bring it back up to this temperature, so once you’re running you want to keep it running for as many months as possible without stopping. For us, that means we need to keep extracting and crushing limestone.”

The 17,000-tonne-per-day quarry and land acquired nearby hold reserves estimated to last a century, and the limestone is covered by relatively little overburden. But the terrain is complex and creates drilling and blasting challenges.

“The topographic area, even if it’s beautiful, we’re at the top of two mountains with the land very difficult to access,” LeMoal says. “On a very small bench, you need to do 10 times more holes than on a 15-metre flat bench, so you can imagine the need of drilling due to this topography as well as the earthworks needed to go with our drill on those sites.”

A drill operator can achieve 300 metres on a 15-metre flat bench one day and only 100 metres in a more complex area the next. The chemical variation of the deposit can also complicate blast pattern planning.

“We have high-quality limestone in some places and high-silica limestone in others, so we need to mix together at the crushers for the correct mix in order to produce low-alkali clinker,” LeMoal says. “The land is also quite complicated. After all the overburden you have some natural holes, since the limestone is easily affected by rain. These holes, as well as the deformation of the deposit, bring us in some very challenging situations sometimes.”

The cold months create yet another challenge. Last winter, McInnis had to remove 500,000 cubic metres of snow.

“It was a quarry inside a quarry,” LeMoal says.

When development drilling began in 2016, McInnis purchased a Leopard DI550 down-the-hole (DTH) drill rig. It was a natural choice for LeMoal, who grew to appreciate DTH rigs at one of the biggest quarries in France before he moved to Quebec in 2013.

“It’s very productive and there’s less deviation if you need to do angle drilling, but it is also a little bit too big when you have to go in steep areas or areas with lots of cracks, holes and faults,” LeMoal says of Leopard DI550. 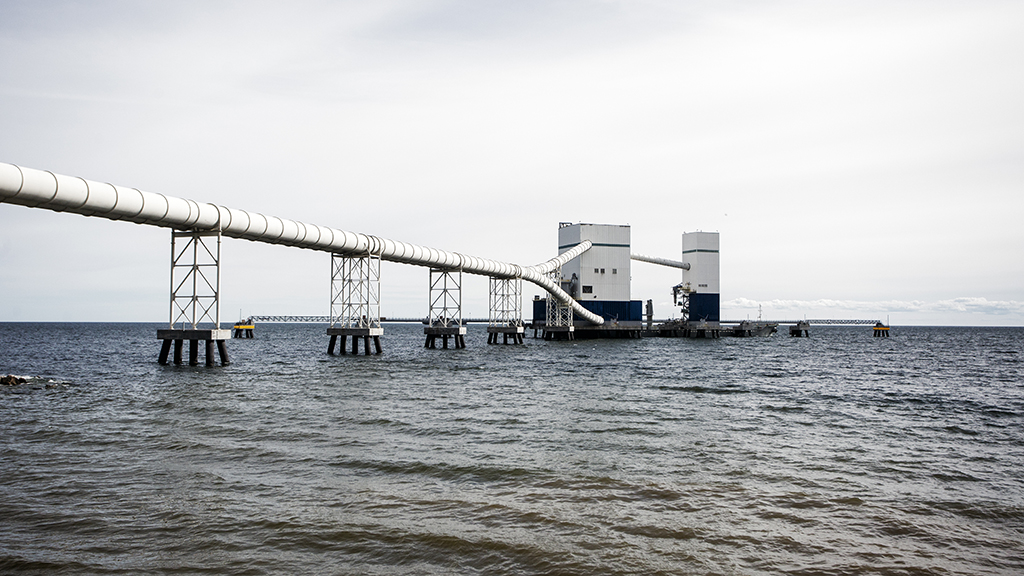 After two years of productive, reliable operation at the quarry, a breakdown in October 2018 risked leaving the team unable to deliver limestone to the plant for more than two weeks.

To minimize the impact on McInnis’s production, Sandvik mobilized the best possible bridge unit it could deliver in the shortest timeframe – a Ranger DX900i top hammer drill rig from the company’s branch in Miramichi, New Brunswick.

just four days after the Leopard DI550 breakdown, LeMoal was skeptical of its size.

“The first time we saw it on the flatbed, we said, ‘Oh no, it’s too little. We will never reach our production capacity with that,’” LeMoal recalls.

“After two weeks of operation, we said, ‘Finally, we can make quite big holes with that and we can go in such lands with easy facility, less earthwork to prepare the field than for the DI550.’ So it was less time of preparation for our shovel and it was finally cheapest to go with this drill on the site. It was a great pleasure and a great surprise, also, because it was not in our consideration to look closer at this kind of drill before that.”

By the time Sandvik recommissioned the repaired Leopard DI550 just three weeks after the breakdown, the Ranger DX900i was already delivering the same productivity drilling 5.5-inch holes as Leopard DI550 had drilling 6.5-inch holes, and the new top hammer rig proved much more versatile and manoeuverable.

“We want to drill as large holes as possible when we have 15-metre benches,” LeMoal says. “But when we are in very difficult area, we cannot go with this machine or it needs a lot of work or we have to call a subcontractor. With DX900i, you can have a good performance and you can have a machine which can go virtually everywhere for the size of the machine. That is what’s impressive.”

McInnis had already been planning to invest in another Leopard DI550 to increase production capacity, but “the facility of the DX900i to go on those kinds of fields got us thinking differently,” LeMoal says.

”We were amazed. We can drill a hole size other top hammer rigs can’t drill, and this drill can also climb mountains

“At first, we were not entirely pleased to receive it as a temporary replacement, but we gave it a try and ultimately we discovered a good drill for our process, for our quarry,” LeMoal says. “We were amazed. We can drill a hole size other top hammer rigs can’t drill, and this drill can also climb mountains.”

The Ranger DX900i has added unexpected value to McInnis’s bottom line by eliminating the need to hire a subcontractor for precasting.

“We were thinking about using a subcon-tractor for our ending walls, but with the DX900i we can do this job internally, too,” LeMoal says.

McInnis purchased the Ranger DX900i in July 2019 as its productivity and efficiency continue to impress. The rig primarily develops flat benches that the Leopard DI550 can access more easily.

“DI550 and DX900i form the perfect match for us,” LeMoal says. LeMoal appreciates the ability to export drilling plans from his office directly to Ranger DX900i. The rig’s fuel efficiency has also impressed the quarry manager.

“We’ve had very low consumption with the DX900i compared to DI550,” LeMoal says. “The consumption was a nice surprise and the production is quite good, too.”

Veteran drill operators Renaud Langlois and Samuel Poirier split time in the cabs of both Ranger DX900i and Leopard DI550. 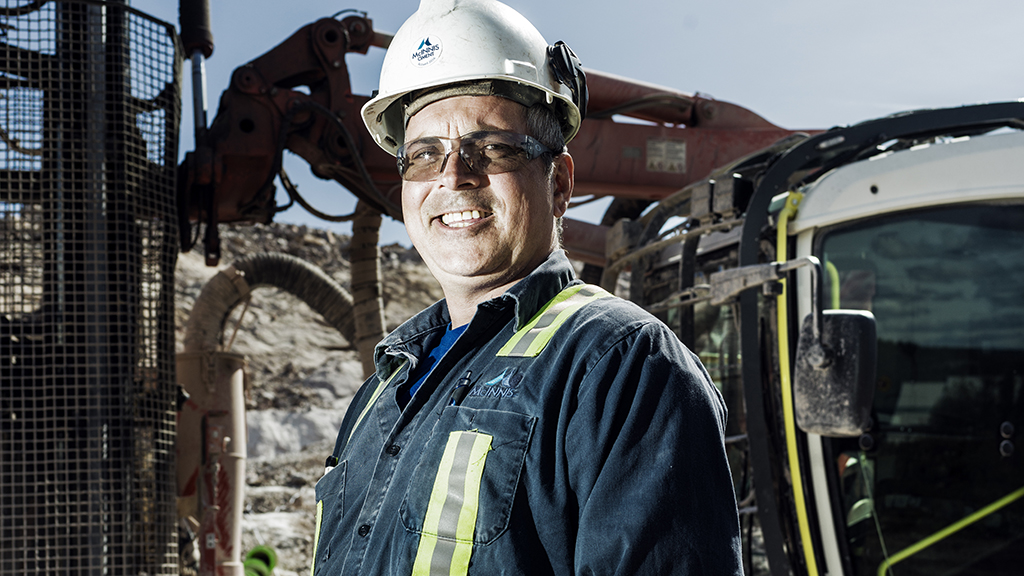 “In 20 years that’s the best top hammer I ever drilled with,” says operator Renaud Langlois of Ranger DX900i. 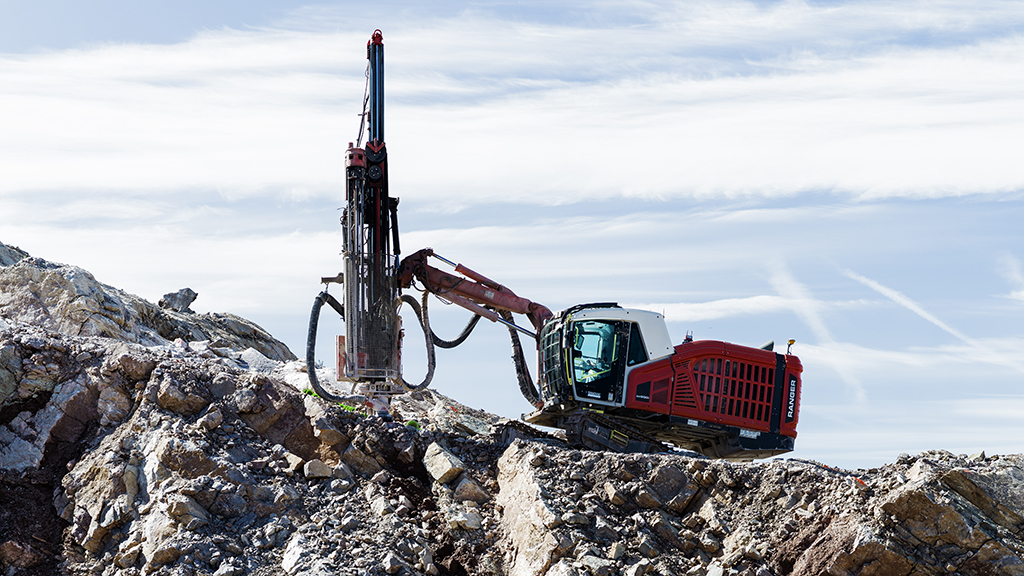 A Ranger DX900i that Sandvik provided as a bridge unit impressed McInnis so much the company ultimately bought it.

“The DX900i is an ideal size for lime-stone, in between the larger DI550 and a smaller top hammer rig,” Langlois says. “The new iCab is nice and quiet.”

His favorite feature is the 290-degree swivelling boom, which minimizes the need to reposition the rig from one hole to the next and enables 55 square metres of drilling coverage.

Despite his initial skepticism of Ranger DX900i, LeMoal is grateful for the blessing in disguise and Sandvik’s prompt resolution of the Leopard DI550 breakdown.

“Even at the oddest moment, Sandvik is here to support us and we still work as a team, and not just supplier versus customer,” LeMoal says. “And it is very
appreciated to have this kind of relationship.”

Sustainability is a key focus for McInnis Cement. The plant voluntarily adheres to the stringent 2015 National Emission Standards for Hazardous Air Pollutants for new plants as established by the United States Environmental Protection Agency (EPA). Its high tower helps to preheat material and the kiln is shorter than many plants, requiring less energy to produce clinker and reducing greenhouse gas emissions.

The plant was built to be able to use wood biomass to heat its kiln, and McInnis is currently conducting a feasibility study to explore up to a 30 percent substitution of current petroleum coke consumption by wood residues in the combustion process. As many as 100,000 annual tonnes of forest biomass from local sawmills – residues including wood chips, bark and sawdust – could help reduce the plant’s greenhouse gas emissions while simultaneously benefiting the Gaspé Peninsula forestry sector.

McInnis also made special considerations when developing its marine terminal to ensure local fishing spots would remain accessible, and vessel movement halts when whales are spotted in the bay. The terminal not only reduces cement transportation costs but also improves the operation’s environmental footprint – one ship can carry the equivalent of as many as 1,500 truckloads of cement.