Movies including James Bond’s Octopussy and The Best Exotic Marigold Hotel paint Rajasthan as an exotic tourist-friendly land of lakes, desert and palaces. While tourism is important to the region’s economy, it’s the mineral-rich ground on which the palaces stand where the riches truly lie.

The soil along with the dry, warm climate produces wheat, barley, cotton and tobacco in abundance. White marble from Rajasthan was used to build the iconic Taj Mahal, while the region also supplies much of the country’s cement and salt. Alongside the zinc, lead and silver mined by Hindustan Zinc Limited (HZL), other mining operations produce gold, sandstone, limestone and copper.

Rising domestic demand for galvanized steel has driven the growth of HZL. The Indian automotive industry is enjoying a boom period, while major cities are investing in new infrastructure such as rapid transit systems. To meet this massive demand for metals, HZL has transitioned its operations from mainly surface mining to entirely underground in only four years.

The Sindesar Khurd (SK) underground mine opened in 2006 with an initial capacity of just 300,000 tonnes. Following several expansions, SK grew from 1.7 million tonnes to 5.3 million tonnes of annual ore production in a five-year period. The expansion is far from over.

Equipment uptime is essential for HZL. To support the company’s rapid growth, Sandvik switched from a standard aftermarket contract to a performance contract, under which the OEM took full responsibility for the maintenance of its fleet at SK.

Part of the Vedanta Group, Hindustan Zinc is an exploration company focused on zinc, lead and silver. From its five mines in the Rajasthan region, Hindustan Zinc has a metal production capacity of more than one million tonnes a year and is one of the world’s largest integrated producers of zinc. The company also operates power generation plants, zinc-lead processing and refining facilities.

By opening on-site workshops, implementing an internal improvement programme of lean principles and a comprehensive safety campaign, Sandvik was able to improve equipment reliability by 30 percent in just six months. Machine availability at SK increased from around 65-70 percent to 75-80 percent.

Access to the mine is through two declines, with ore hauling set to start through a new one-kilometer-deep production shaft later this year. Following commissioning, the total annual hauling capacity of the mine will increase from 4.5 million to 6.0 million tonnes. With an expected mineral resource base of 91.4 million tonnes, many new operators will be needed in the coming years.

Finding local people with the required skills is a challenge for HZL. The company sources the majority of its operations staff from the surrounding area, and historically these people have simply learned through experience. But with rapid expansion and digitalization going hand in hand, that needs to change.

“We are interested in whatever next-generation intelligent equipment Sandvik is producing, but the skills shortage in India is preventing us from utilizing the equipment to its full capability,” explains Sanjay Sharma, HZL unit head at SK mine.

To close the skills gap as quickly as possible, HZL has invested in a new training centre. Sandvik has helped set up the company’s new centre of excellence for drill operators. Of the Sandvik employees at SK, two are dedicated to both classroom and on-the-job training. Regular workshops are held for operators of the drill rigs and loaders, while a “train the trainer” programme is also under way with HZL personnel.

Sandvik has also established its own training academy in India, designed for recent college graduated in order to help develop a talent pool for the mining industry. More than half of the trainees enrolled in the academy’s 18-month training course are being developed specially for HZL.

”Within the company, SK mine is known as the Sandvik mine.

Several hundred Sandvik staff support operations at Hindustan Zinc’s five sites, with up to 200 based at SK at any one time. Two substantial on-site workshops help ensure efficient maintenance and constant spare parts supply, and Sandvik helps train the next generation of local drill operators on its cutting-edge equipment.

Drill rig operator Jagdeesh Chandra Paliwal values the two-way communication between the operators and Sandvik personnel. “It’s important that we listen to each other,” he says. “Sandvik technical support are quick to respond. I learn from them, but they listen when I have to explain something practical.”

Rajasthan is one of India’s hottest regions, with the arid and inhospitable Great Indian Desert just a few hours’ drive away. Despite surface temperatures regularly topping 40 degrees Celsius, modern ventilation keeps the underground mine cooler than the surface. As a local lad who is proud to have worked at SK for 11 years, Paliwal is used to the often harsh conditions in and around the mine. Even so, he’s grateful for the air conditioning in the cab of his Sandvik DL421, something he hasn’t always had. “I started out on the Sandvik DL310, but for the last couple of years I’ve been operating the Sandvik DL421,” he says. “I am very happy with the machine. It has everything I need to do the technical job, but what I’m most happy with is the air-conditioned cab that means I can work in comfort for longer. It’s features such as this that show how Sandvik understands the needs of an operator in harsh conditions.” 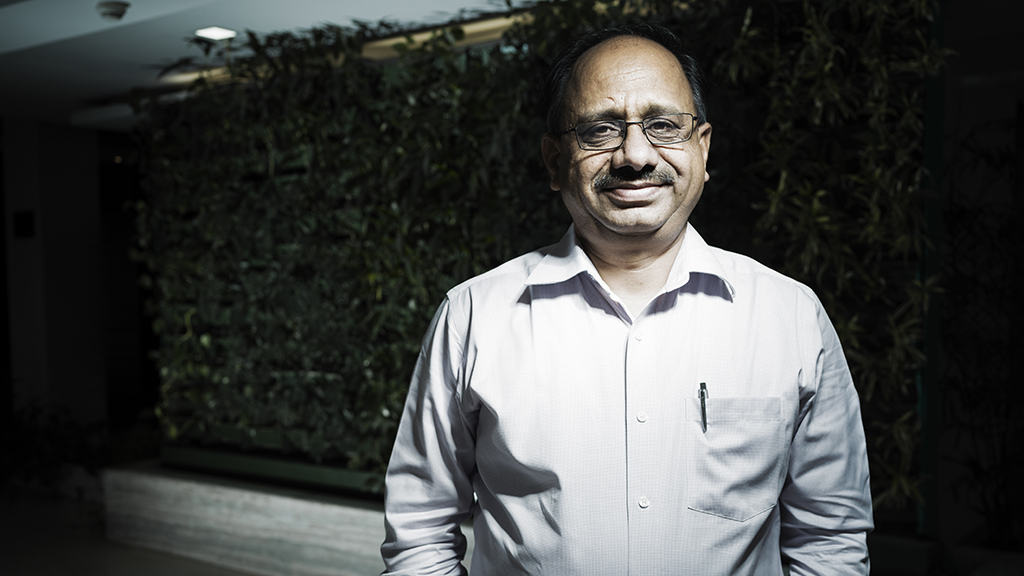 HZL director of operations Laxman Shekhawat, credits Sandvik equipment with the success of the expansion.

Paliwal says his biggest day-to-day challenge is dealing with the changing characteristics of the rock. He often encounters bands of hard strata, and it’s in those cases that he really values the technical capability of Sandvik DL421. “Staying on track with the drilling plan is not easy when I encounter hard rock,” he says. “The auto mode of Sandvik DL421 is intelligent enough to adjust the pressure just right so that we maintain the quality of the hole while keeping on schedule.”

It’s not just the operators that value this attention to detail, which extends well beyond the drill rigs. HZL uses equipment from every part of the product range offered by Sandvik in India. This is especially so at SK mine, where four out of five machines carry the unmistakable bright orange color of Sandvik.

While the electro-hydraulic Sandvik DL421 longhole drill rig is an ideal match for the large-scale production under way at SK, Laxman Shekhawat, HZL director of operations, credits other Sandvik equipment with the success of the expansion.

“Sandvik’s 21-tonne underground loaders were total game changers for us,” he says. “We could not have grown so quickly without the excellent support and cutting-edge mining equipment from Sandvik. So much so that within the company, SK mine is known as the Sandvik mine.”

With such rapid progress and trust in Sandvik come high expectations for the future. The high utilization rate of the Sandvik equipment is helping SK meet its aggressive growth targets. With still more growth to come, the team is doing everything it can to keep those utilization rates as high as possible. This work is enabled by the performance contract in place with HZL, which Mohammad Imran, Sandvik’s operations manager, says is one of the company’s biggest. “At SK we have 70 machines, two workshops, and up to 200 people as and when we need them,” he says. “The contract we have in place incentivizes everyone to make sure the equipment is performing at optimum levels of efficiency, all the time. This impacts all aspects of our daily work, from condition monitoring to preventive maintenance and even safety.”

HZL has taken on board many of Sandvik’s safety initiatives, such as the monthly focus area, an initiative that HZL now implements across all its sites. “HZL sees us as a business partner, not a supplier,” Imran says. “Such is their trust in us that senior management asked us to conduct safety inspections of other OEMs at SK.”

In order to achieve its ambitious expansion, HZL plans to make SK India’s first fully digital mine, with Sandvik as an important partner. Sharma explains that eliminating manual intervention and improving operational efficiencies are the key drivers behind the digitalization. “More intelligent machines and more skilled operators lead to a safer and more efficient environment,” he says.

The overall agreement in place between Sandvik and HZL is one of Sandvik’s largest performance contracts in the world. At Sindesar Khurd mine alone, the Sandvik presence includes:

“We can now generate alerts and take priority action before component failure to reduce unplanned downtime,” Imran says. “The next step is to install software in all equipment at SK, not just Sandvik equipment, to minimize person-to-machine and machine-to-machine interactions.”

While everyone at HZL is focused on the technology and automation necessary to achieve the ambitious expansion goals, even senior managers keep returning to the fundamental importance of the operator.

Sharma says the company could not consider the expansion without the buy-in from the operators. “Almost all our operators come from the local community,” he says. “They are proud to work for HZL and are very passionate about their profession. That’s why we put so much effort into improving conditions in the mine, introducing technology that enables them to do a better job, more safely than ever before.”

Today’s consumers have creative options other than owning a product for a particular application. The question rem...

The relationship between Sandvik and Guizhou Kailin Group Co. Ltd stretches back 30 years. The Sandvik 365 service...

Mining contractor BSHPU tripled its monthly development rate at the Artemyevsky polymetallic mine in Kazakhstan, w...

Sandvik Mining and Rock Technology in Australia has turned a near miss into a safer transportation solution for dr...

When Randgold Resources started to grow its flagship Loulo operation in western Mali, comprising the Gara and Yale...

A novel approach to customer service

Since opening its new facility in 2014 in Kitwe, Zambia, the Sandvik Mining support centre has upped its ...