Jussi Puura, digitalization lead at Sandvik Mining and Rock Solutions, is excited about the AutoMine Concept vehicle, and no wonder. “This is essentially the way to the future and Sandvik’s roadmap to get there,” he says. “This shows what a typical piece of mining equipment could look like in 10 or 20 years. And more than that, it’s not just a vision in a slide deck presentation. It’s an existing, physical vehicle actually working down in our test mine.”

His enthusiasm is understandable. In addition to being a cutting-edge battery-electric loader, the AutoMine Concept ve-hicle packs advanced surroundings perception in 3D, mapping technology and artificial intelligence to enable it to adapt and plan its own routes to find the most suitable paths, even in continuously changing environments. Ultimately, it repre-sents a big step towards comprehensively autonomous mining operations.

”This shows what a typical piece of mining equipment could look like in 10 or 20 years. It’s an existing, physical vehicle actually working down in our test mine.

The AutoMine Concept vehicle is also a major milestone in Sandvik’s development of the AutoMine and OptiMine so-lutions. Since 2004, these digital systems have supported automated mining operations. The marketplace initially was hesitant to adopt such revolutionary solutions, but the last several years have seen a marked increase in demand. The cur-rent growth rate is strong, including in developing markets such as Africa, India, China and Latin America.

The capabilities of the AutoMine systems have also seen a marked improvement over the years. However, more recently it has become increasingly clear that the next generation of mine automation is coming, and upgrades to the existing plat-form help unlock new, even greater capabilities. This developmental leap could be compared with recent developments in autonomous road vehicles, including innovations such as the Google car, Tesla and others. Also, developing markets and challenging mining conditions in particular require maximum reliability and robustness.

Riku Pulli, president of the Rock Drills and Technologies division at Sandvik Mining and Rock Solutions, reveals more about the breakthrough technologies in the AutoMine Concept vehicle.

“First of all, this vehicle is designed and engineered for automation from the outset,” he says. “The design philosophy of existing fleets is based on a conventional loader, which always includes a cabin, joysticks, pedals and so on.” 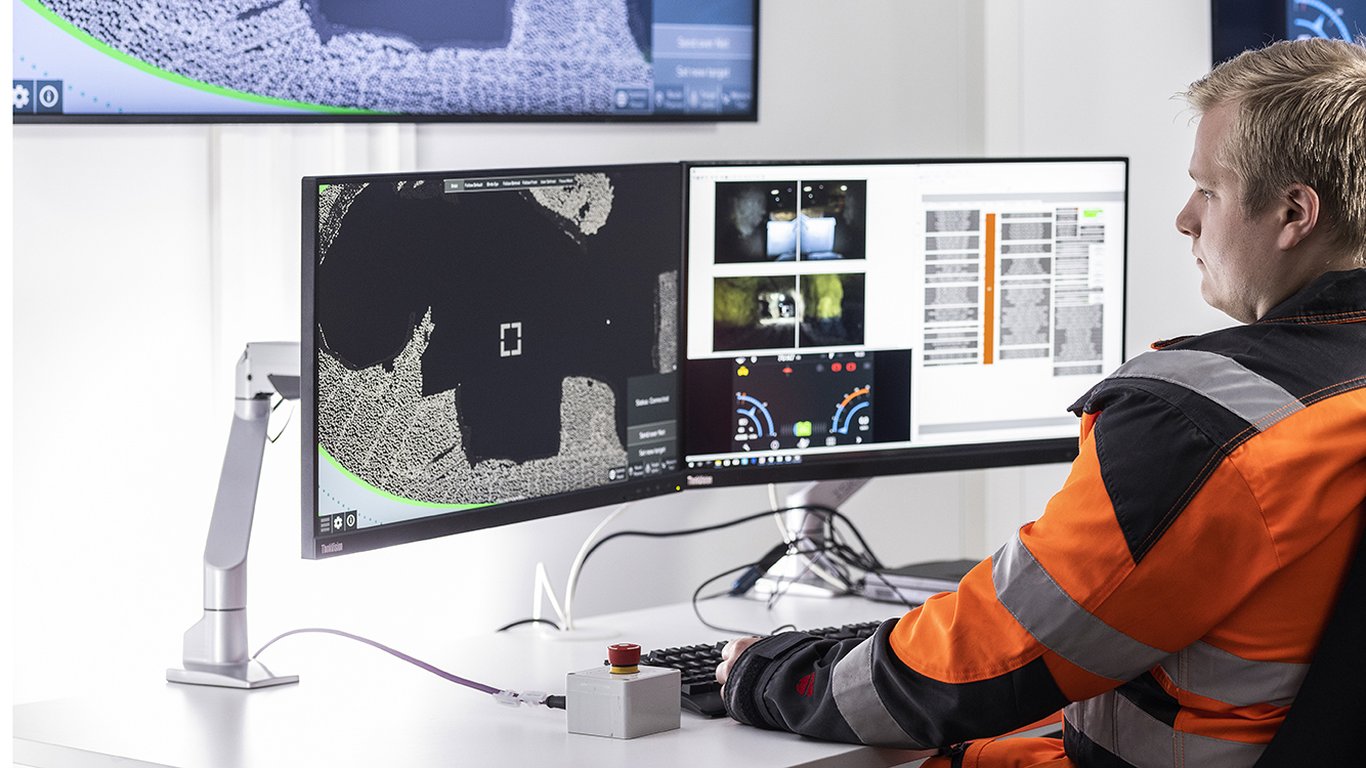 The AutoMine Concept vehicle is designed exclusively for automated and remote operation.

The AutoMine Concept vehicle is designed exclusively for automated and remote operation. There is no cabin at all, which means cost savings and the elimination of  unnecessary limitations, enabling more efficient and reliable overall design because there is no need for duplicated steering systems and controls, one for the human operator and one for the computer control system.

Another major innovation is the tremendous expansion of sensing capabilities. Existing mining equipment is limited in this respect. It can essentially sense where the sidewalls of the tunnel are, for example, but not much more. The AutoMine Concept vehicle creates a true 3D view of its entire surroundings, including the vertical direction.

“This opens up really significant possibilities compared with existing mine automation systems, which are restricted to gated areas separated from people and other equipment, much like security gates around robots used in manufacturing,” Pulli explains.

The existing AutoMine safety system is based on isolation barriers that enable automated equipment to operate in des-ignated, barricaded areas, and stops equipment immediately if a safety barrier is tripped. The all-around sensing capability of the AutoMine Concept vehicle is designed to make isolation of automated operations unnecessary. The vehicle can stop or move around any obstacle on its route.

“This is a huge improvement because it eliminates a host of limitations linked to mine automation,” Pulli says. “It has until now been necessary to separate automated mining operations from conventional manual operations. The new platform will increase operational flexibility tremendously because the isolation of automated operations becomes unnecessary. Work can go on around and among the automated vehicles simultaneously.”

Why is it, then, that the concept vehicle is specifically a battery-electric loader? According to Pulli, Sandvik wanted to demonstrate that future mining equipment will be not only autonomous but also emission-free. Another reason is linked with the AutoMine platform. Most of the equipment controlled with this system consists of loaders, and what sets loaders apart from other mining equipment is their relatively high speeds, demanding performance requirements and round-the-clock operation at a high utilization rate in extremely cramped conditions.

Sandvik wanted to set a benchmark: if the company was able to pull this off, it could be confident of its capability to transfer the technology to other types of mining equipment, such as drill rigs, where the requirements are typically less stringent.

What will the next steps be? The capability to further scale the technology to other types of mining equipment is an early goal that should be met soon. Another focus area will be the technology mix, which now includes several types of scanner technologies and, for the first time in mining equipment, artificial intelligence. Some of these components will be imported to the existing AutoMine system in 2021.

Flexibility: possibility to operate both conventional and autonomous vehicles in the same area