Together with four industry partners, LKAB is planning to set a new standard in underground mining. To succeed, the company needs to dig deeper and more sustainably than ever before.

LKAB’s underground iron ore mine in Kiruna, northern Sweden, is the largest of its kind in the world. Nevertheless, the resources at the main level of 1,365 metres below surface are depleting, and to meet increasing demand there’s only one way to go: follow the orebodies farther down.

By 2030, LKAB must be ready to go deeper than ever before. But the Swedish mining company won’t settle for simply digging deeper. It also wants to set a new industry standard for carbon-free underground mining.

“I was in a transition phase in my career when this project came up,” says Michael Lowther, manager of LKAB’s test mine Konsuln in Kiruna.

After 35 years in the mining industry, Lowther was looking for a new career challenge. This coincided with the start of the LKAB-led project Sustainable Underground Mining, an opportunity he felt he couldn’t miss.

“The concept of this project is absolutely incredible,” Lowther says. “We are looking at a more sustainable way of working, and ultimately protecting the climate and the long-term future of all our societies. To me, it’s on the cutting edge of what has to be done within the mining industry.” 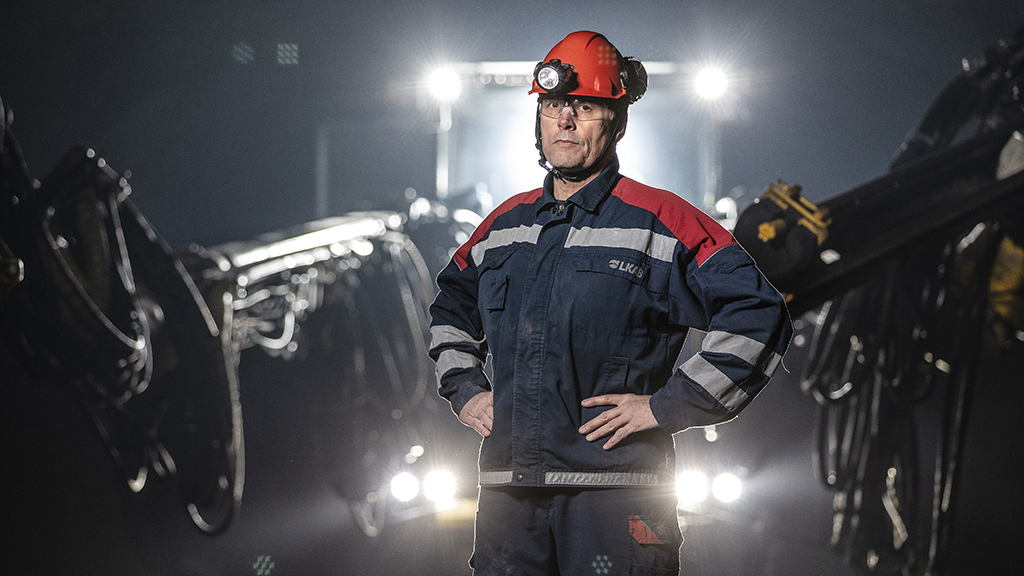 Initiated in 2018, the project is a huge joint effort bringing together LKAB, Sandvik, ABB, Epiroc and Combitech to fundamentally change underground mining at its core.

“We see that the future is CO2-emission-free, digital and automated,” says Nils Stenberg, manager of LKAB’s Kiruna mine. “But we cannot get there alone, so this is something we have to do together with other talented suppliers and operators.”

The objectives of the project can be narrowed down to four main goals. The first is zero harm and ensuring a safer work-place for all personnel. The second is to take carbon dioxide out of the mining system. The third is to increase productivity by 50 percent.

“That’s probably the greatest challenge of all, because we’re going deeper,” Lowther says. “And generally, when you go deeper in a mine, the cost goes up and productivity goes down.”

Stenberg nods, and chimes in: “Our deepest operation today is 1,365 metres. We will need to dig another 700 metres straight down.”

The fourth and final goal? To set a new standard for sustainable underground mining at great depths.

To achieve these ambitious goals, LKAB and its partners are using the Konsuln test mine to experiment with new technologies. Electrification, digitalization and automation will of course be important components. And in the virtual copy of the actual Konsuln test mine, new technology is trialled.

“The virtual mine allows us to simulate systems before we spend a lot of money implementing them,” Lowther says. “It’s useful, for example, if you have an emergency and you want to know where all the people are and find the best paths to safety.

The project is a collaboration between LKAB, Sandvik, ABB, Epiroc and Combitech. Volvo Group was part of the project when it started in 2018, but opted out two years later. The vision is to work together as partners to push the boundaries in the fields of automation, digitalization, electrification and sustainability to secure a more sustainable future for the underground min-ing industry.

Another example is if you have a production plan for the day, but something happens, like a burst pipe or a flat tire, or a number of planned workplaces become unavailable. Then you can ask the lab to run three to four simulations and see what is the next best thing to do.”

This might sound futuristic, but as Lowther explains, it’s a logical next step for a business that’s becoming more and more digitalized.

“All of this comes from the applications of technology where you are in constant communication with the people in the mine, and their positions are known,” he says. “Go back 20 years and it could be difficult to know where you parked a truck in the last few days.”

In a project of this scale and ambition, time is a precious commodity. By 2030, the technologies developed must be fully operational and ready to go.

“We’ve set 2030 as the deadline because the level we’re currently working at will last until 2035 or 2040,” Stenberg says. “Around 2030 we will need to go below 1,365 metres. The new technology we are developing needs to be ready for implementation by then.”

Although the targets are clear, the road ahead is not. And the pandemic has caused a bump in the schedule, delaying the initial tests at Konsuln. However, the real challenge is to get the partners to work together in an unprecedented collaboration.

“Big companies like Sandvik, Epiroc and ABB are not used to putting their cards on the table and showing what they’ve got,” Lowther says. “We are trying to do something different here, and that’s the challenge – to get people to think differently.”

In November 2020, LKAB presented a historic transformation plan. The company’s new strategy sets out to achieve net-zero carbon emissions from its own processes and products by 2045 and secures operations with expanded mining beyond 2060. One of three main priorities for the transformation is to establish a new industry standard for mining with more autonomous and digitalized operations.

Furthermore, there will be a gradual transition from being a pellet producer to a producer of direct-reduced iron, so-called sponge iron, using green hydrogen. The third priority is to extract critical minerals from mine waste.

This is the biggest transformation in LKAB’s 130-year history and could end up being the largest industrial investment ever made in Sweden.

“I am really proud to be a part of this and actually help to secure a future for coming generations,” Stenberg says.