With two new models of articulated underground dump trucks, TH551 and TH663, Sandvik takes its comprehensive approach to safety and productivity to a new level.

Sandvik TH551 and TH663 are two new underground dump trucks with first-class operator environments. A reliable design maximizes uptime and tonnes per hour. The first step in the development of the new family members was a reality check. 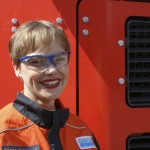 “We went out to mining companies and listened to their problems in truck usage and hoisting,” says product manager Minna Pirkkanen.

Among the first companies to put one of the new Sandvik truck models in action was Wolfram Bergbau und Hütten AG in Mittersill, Austria. Underground mining began there in 1979, and now 500,000 tonnes of Scheelite (CaWO4) ore per year is extracted in a highly automated process. The mine opted for a TH551 with a payload of 51 tonnes.

“It is very powerful and very productive,” says mining manager Felix Gaul. “Every mine nowadays has to get more and more productive. This will be the fight of the future, not only for our mine.”

The result is TH551 and TH663, with payloads of 51 and 63 tonnes respectively. They have been designed for optimal interaction with operators, maintenance staff, loaders and the mine itself. Let’s take a closer look at these areas.

“The comfort and well-being of the operator is very important,” Pirkkanen says. “A happy operator is generally a more productive operator.”

Pirkkanen elaborates on the ergonomic features, which include a safety cabin that is 35 percent larger than on the previous models, fitted with a four-point safety belt and a trainer seat. A vehicle control and management display with all vital information allows operators to keep their eyes on the road. Comfort is provided by a fully adjustable seat and, in another invention on these trucks, a front-frame suspension. The attention to detail includes a cooling box integrated with the climate control system. This allows the operator to keep food and beverages fresh on board the truck.

“These are just some examples of the cabin’s ergonomics and user-friendliness,” Pirkkanen says. “It is a really nice place to be.”

Safety has been the major focus area during the development of  TH551 and TH663. Each has more than 60 safety features to protect the operator, maintenance staff and the truck itself. They include certified cabin roll-over and fall-over protection structures (ROPS and FOPS).

Looking at safety from a maintenance perspective, daily service can be done from ground level to reduce the risk of falling accidents. The design also allows replacement of large components, such as the engine transmission, with a minimum of downtime. One specific area of improvement that came up in the dialogue with the mining companies was punctures.

One of the biggest reasons for downtime and danger was when a hoisting truck going up a ramp fully loaded got a flat tyre,” Pirkkanen says. “We were told it could take anything up to three days to repair and move the machine out of the way.”

Ten + one reasons for TH-trucks

“It is very difficult to jack up such a heavy machine in a confined space with an inclination,” says Pirkkanen.

The remedy that TH551 and TH663 offer is an optional on-board jacking system for faster and safer tyre changing. There are two hydraulic jacks in the front and two in the rear, all working independently of one another. Another new feature is a tyre monitoring system that registers pressure and temperature inside in real time. This makes it possible to identify problems before they occur, not least a potentially devastating tyre fire.

Then we come to the trucks’ interaction with the mine itself and other mining equipment. To reduce exhaust emissions and the corresponding ventilation requirements, TH551 is the only underground truck available with a Tier 4i/Euro Stage IIIB compliant engine alternative. Looking at the envelope size, they are made for 5×5- and 6×6-metre haulage ways. To make sure the links in the production chain match each other, the dump boxes accommodate precisely three passes by the corresponding Sandvik LH517 and LH621 loaders.

The biggest challenge we had was to increase the payload, because the tyres set a certain limit,” Pirkkanen says. “So we had to reduce the overall vehicle weight. What we did was to develop a completely new frame structure in high-strength steels, which allowed us to use less material.”

Manufacturing in high-strength steels is more demanding than in traditional ones. Sandvik relies on long experience and deep metallurgical know-how to take full advantage of the materials. On TH663 the result is three tonnes more in the back, compared with the previous model. But that doesn’t help if the extra capacity isn’t fully utilized. This is why both trucks have a set of weight indicator lamps on the outside. They tell the operator of the loader when the dump box is empty, almost full, full or overloaded. The latter also makes it possible to protect the trucks from misuse.

“The goal is to make sure every single trip the truck makes is a productive one,” says Pirkkanen.

The signals are just one part of an integrated production monitoring system. This is perhaps the most significant productivity-improving feature on the truck. It senses the weight in the dump box and combines that with information about position and shift, for example. Also, the operator can let the system log what is on board the truck, whether ore or overburden.

“When you have many different operations going on in the mine, you’re able to track the route of each load,” Pirkkanen says. “The whole idea is to measure and optimize the operation.”