Sandvik Mininghas introduced a new rod range to the market that is proving to be a lot tougher than its predecessor. With the new +Range rock tools, customers stand to extend the service life of their rods by more than 30 percent.

Percussion echoes between the newly blasted walls of overburden and coal. A Sandvik DP1500 top hammer drill rig, embedded in black coal, drills hole after hole into the hard bedrock.

South African mining contractor Diesel Power Opencast Mining has the contract for drilling and blasting at the Palesa thermal coal mine in Bronkhorstspruit, east of Pretoria. It’s a difficult task as the overburden is hard and the export-quality coal beneath it is soft. A GT60+ rod, one of four new rods in the new +Range from Sandvik, penetrates to a depth of 23 metres, and it is important to have the right pressure at all times.

• Increase service life by more than 30 percent
• Improve employee safety, since new rods require less handling
• Reduce environmental impact, as less diesel is needed for operations
• The rods are made of new heat- and wear-resistant steel alloy
• T38, T45, T51 drill rods will be available as standard and +Range
• All GT60 drill rods and tubes will be upgraded to GT60+.

There are enormous forces at work on the drill rods: between 3,000 and 4,000 g during acceleration from every percussion. An advanced fighter jet is designed to cope with only 9 g. Due to the high pressure and friction, the threads connecting the drill rods are exposed to temperatures of several hundred degrees Celsius when drilling. Diesel Power has lost many drill rods and bits in the ground because of rod breakages.

Extensive testing to produce the best rods
To increase the service life of its existing rock tools, Sandvik decided to develop a new family of +Range drill rods. Having worked in close cooperation with Sandvik for many years, Diesel Power and Highpoint Opencast Mining Services, another mining contractor in South Africa, became natural partners in developing the new products. Sandvik collected samples of worn-out rods from the companies and analyzed them at Sandvik rock tools’ research and development (R&D) laboratories in Sweden. After extensive R&D, GT60+ rods arrived at Highpoint and Diesel Power for on-site testing.

Johan Coetzee, managing director of Highpoint, has been involved in the development project from the start and has only positive things to say about the new rods. The company tested the rods in soft coal and hard rock conditions in the chrome mine for two months, and in both instances the improvements were substantial.

“When we tested the +Range rods, we put the new ones on one machine and the old type on another machine,” he says. “They were drilling next to each other so we could compare apples with apples, and that’s how we discovered that we got 13,800 metres out of the best of the new GT60+ rods. That’s more than double the average.”

Coetzee says Highpoint is getting about 30 to 35 percent more life out of the new type of rods, which means huge cost savings for his business. In terms of production, that’s an increase of 10 to 15 percent. 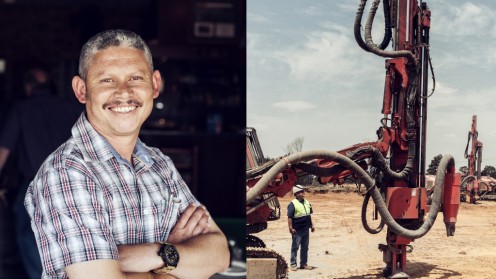 The company is also experiencing a huge improvement when it comes to safety, since the new rods require less handling.

“The morale of the operator is greatly improved because he doesn’t have to get out of his cabin to change the heavy rods as often as he used to,” Coetzee says. “There’s also an environmental benefit of using the new rods because we use much less diesel, leaving a smaller carbon footprint.”

Erick Walker is the senior drill and blast foreman at Diesel Power. Standing in a stack of old GT60 rods at the Palesa mine, he demonstrates why he will be using the new GT60+ rods from now on.

“On this rod, the threads are round, but after drilling it hasn’t got a square shape anymore,” he says. “This is after about 3,000 metres, and this rod was lost in the ground.”

Diesel Power has had better results with the GT60+ rods.

“We haven’t had the breakages, and we have better threads,” Walker says. “When we started using the GT60+ rods, our metres picked up. On a GT60+ drill rod we achieved as much as 24,907 metres.  We drilled on a whole string of drill steel for that month.

“We tested the new GT60+ rods for two months, and we only lost one rod.”

Walker says the new +Range rods are also having a positive effect on the environment, since rods don’t have to be replaced as often as before.

“We were wasting diesel by changing rods two or three times a month,” he says. “The new +Range will help us bring our diesel costs down.”

Highpoint Opencast Mining Services and Diesel Power Opencast Mining are mining contractors that specialize in drilling and blasting. They are both based in Mpumalanga Province, east of Johannesburg in South Africa, where coal mining is growing rapidly. Both companies are currently looking at expanding into other parts of southern Africa.

New rods important for future growth
For Highpoint, gaining many thousands of extra metres on every drill rig per month will help the company grow.

Albert Hufnagel, the founder and CEO, started his drilling and blasting business 10 years ago with one secondhand drill rig, purchased from the rental division at Sandvik. In February 2014, Sandvik will deliver its 28th drill rig to Highpoint.

Sandvik has customers like Hufnagel all over the world. He needs equipment that he can rely on and that comes from a premium brand. With this in mind, Sandvik developed a new range of drill rods that would increase safety, productivity and peace of mind for its customers. A new GT60+ rod may look similar to the old rod, but behind the scenes there has been extensive research and development.

Petter Bengtsson, marketing and communications manager for rock tools at Sandvik, says he spoke to an R&D colleague who had been involved in the development of fighter jets.

“He told me that the mechanical requirements for rock tools are much tougher than for a fighter jet,” Bengtsson says. “We’re strengthening our position as the premium brand in bench drilling rods and tubes with this new +Range family, which includes T38+, T45+, T51+ and GT60+. +Range rods are made from a new steel alloy, which will increase the service life through wear and tear improvements.”

The magic rod
Japie Gouws, operations manager at Highpoint, says the testing and research that have gone into developing the new rods have been worthwhile.

“Safety-wise, it is much better because we don’t have to handle the rods that frequently,” he says. “If you get better life on the rod, it improves your penetration rate, which improves production and you drill so much quicker.”

Gouws says he gets 13,000 metres out of the new rod, which means reduced cost per cubic metre.

“I was very surprised to see the difference,” he says. “I didn’t realize that it was that much, but when I went into the figures I saw that there was a big gain.”

Operator David Hlatshwayo at Highpoint is equally enthusiastic about the new rods. 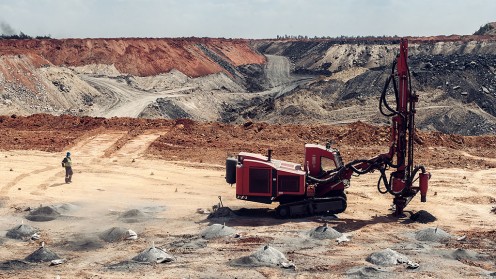 “It takes a lot of time to change rods because I have to stop the machine and gather the other men to help me put the new rods in,” he says. “We haven’t had to change the +Range rods for a long time. I’ve drilled a lot of holes without experiencing any damage to the rod. It is a magic rod.”