Midas is a tiny town with huge history. Born from a gold discovery more than 100 years ago, this sleepy community in remote northern Nevada isn’t the bustling hub of activity it once was.

Today, a replica of a 1920s-era gas station sits in the middle of Main Street, a tree-lined dirt road where boxing legend Jack Dempsey famously trained for his heavyweight comeback during the same decade.

An hour’s drive northeast of Interstate 80 along a series of state routes and unpaved but well-maintained access roads, Midas sits at the base of the Snowstorm Mountains, a favourite regional recreation area for hiking, fishing and big game hunting.

The Midas Saloon and Dinner House.

Only a handful call Midas home year-round, and some who grew up here have moved back to retire. The Midas Saloon and Dinner House, the town’s only operating business today, draws diners from large nearby towns Battle Mountain (80 kilometres away), Winnemucca (100 kilometres) and even Elko (145 kilometres) for its burgers and prime rib dinners. The saloon’s weekly reservations-required Mexican night always sells out and the Friday night potluck is also popular. On Saturday nights, the “buckaroo” happy hour features steeply discounted drinks — cowboy hats required.

Golden history
Midas was born from a gold discovery at the base of the Owyhee Bluffs in 1907. Initially named Gold Circle but later renamed Midas by the federal government, the mining district produced millions of dollars of gold, silver, copper, lead and zinc over the next 15 years.

Mining continued in the area for another two decades until the U.S. entered World War II. The government’s War Production Board issued Limitation Order L-208 in October 1942, classifying gold production as non-essential and closing most mines so workers could instead support the war effort.

More than 50 years later, Newmont brought mining back to the district on a scale that likely would have been incomprehensible to the area’s first miners. The Midas mine beneath the hills a stone’s throw east of the town started producing gold and silver in 1998, and churned out around 200,000 ounces of gold during its peak years — more in one year than the district’s first 90 years combined. All told, the high-grade, narrow-vein epithermal deposit produced around 2 million ounces of gold and 27 million ounces of silver between 1998 and 2013.

New life
Klondex Mines Ltd., a growing gold and silver producer developing its flagship Fire Creek property 160 kilometres to the south, acquired the Midas operation from Newmont in mid-February 2014. The acquisition included the underground mine, related support infrastructure and mining equipment and, perhaps most importantly, the Merrill Crow processing facility and milling equipment.

The high-grade, narrow-vein epithermal deposit is similar to Klondex’s producing Midas mine, which is located around 160 kilometres north of Fire Creek. Klondex acquired the Midas mine and ore milling facility in early 2014. The company currently has three other gold exploration properties in Nevada.

“Despite the outstanding upside of Fire Creek, we were always missing something, and that was a mill,” says Paul Huet, Klondex President and CEO. “Toll milling in Nevada is not always easy. Having our own mill allows us to provide our own destiny. We can pour gold whenever we generate it. We can reduce our operating costs. More importantly, reducing our operating costs allows us to operate at different metal prices. If gold were to drop below 700 dollars an ounce, Klondex remains economic. This is what’s very different and exciting about our company.”

Happy homecoming
Huet and mine manager Sid Tolbert, like many of their 100-plus colleagues at Midas, have history at the mine.

Huet, a 26-year industry veteran, spent 10 years mining underground in his native Canada before returning to school to finish a four-year mining degree. Upon completion, he took a general foreman job at Midas and was promoted three times during a seven-year stint under Newmont ownership, only leaving his General Manager position to build the Hollister mine 18 miles east.

“This is why Midas is so unique to us,” says Huet, who joined Klondex less than two years ago to build its Fire Creek operation. “I’ve got a lot of experience, a lot of good history here. This is an amazing site. Many of the employees that I’m having the opportunity to work with I hired myself here 10 years ago, so this is a very interesting time in my life. Coming back to buy the asset is a huge, huge step and a real thrill for all of us.”

Tolbert spent 14 of his 22 years in the mining industry at Midas under the operation’s previous owners. He also ascended the ranks, arriving as a miner in 1998 and departing in 2012 as operations superintendent before returning as mine manager for Klondex.

“I’m excited to be back here at Midas to continue what we started when I was here previously,” Tolbert says. “The potential at Midas is huge. We’ve got some good targets for drilling and extending the mine life and continuing to advance and grow this resource.”

Eager to explore
Klondex’s initial blast rounds at Midas just days after assuming ownership exposed high-grade gold and silver veins in an area along strike from the existing workings on the 905 vein. Since encountering the zone, Klondex has extended the drift 28 metres along strike of the vein. It will serve as a primary drilling and mucking horizon for future long-hole stoping, one of several mining methods Klondex plans to employ at Midas. 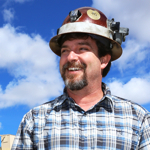 Klondex also initiated an underground exploration drilling program in March 2014 to develop the southern portion of the mine’s eastern veins, drilling 3,702 metres during the first quarter.

“We’ll primarily be looking at the east in the short term and then district-wide we’ll be starting to look all over our land package for new opportunities,” Tolbert says.

Eliminating maintenance hassles
Klondex is able to focus on production and its core business processes thanks to an asset reliability agreement with partner Sandvik Mining. Under the contract, Sandvik handles on-site maintenance of all mobile equipment at Midas and Fire Creek, which includes many of the OEM’s own drills and loaders.

“We have a lot of advantages using Sandvik,” Huet says. “They’re experts in repairing equipment, sourcing the equipment and providing spare parts. Having Sandvik as a partner reduces our risk. For us, having a partner like Sandvik is very critical to our overall costs.”

Missing link
Klondex began operating its much-needed mill on February 19, 2014, only a week after assuming ownership. The mill can process as many as 1,200 tonnes per day and is fed a blend of mineralized materials from Midas and Fire Creek, the latter of which is trucked in at a haulage cost of around 32 USD per tonne.

Klondex poured its first gold and silver bars in March 2014 and soon earned the first revenue from sales of precious metals in the company’s history.

“Last year and this year are pivotal years for the company,” Huet says. “They’re transformational, in the fact that the company’s gone into production. For the first time ever, Klondex is actually pouring doré gold bars. These are truly exciting times.”

Today’s consumers have creative options other than owning a product for a particular application. The question rem...

The relationship between Sandvik and Guizhou Kailin Group Co. Ltd stretches back 30 years. The Sandvik 365 service...

Mining contractor BSHPU tripled its monthly development rate at the Artemyevsky polymetallic mine in Kazakhstan, w...

Sandvik Mining and Rock Technology in Australia has turned a near miss into a safer transportation solution for dr...

When Randgold Resources started to grow its flagship Loulo operation in western Mali, comprising the Gara and Yale...