When Udo Fischer first walked into the Sandvik cemented carbide production unit in Västberga in 1965, he was a 27-year-old engineer with admittedly limited powder metallurgy knowledge. By his retirement in 2002, he and colleagues Torbjörn Hartzell and Jan Åkerman had revolutionized rock tools.

The trio pioneered rock tool development for decades, devising the idea for hardmetal inserts with gradients, which resulted in the “Dual Property” buttons still used in many rock drilling applications today. Their innovative achievements in percussive drilling and cutting applications are being celebrated by the mining industry this year as the three friends are inducted into the International Mining Technology Hall of Fame.

Now in its second year, the Hall of Fame recognizes the greatest technical innovations from the world of mining. The Sandvik trio is inducted in this year’s Underground Development category for their ground-breaking accomplishments over more than three decades. 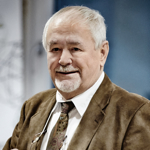 “We’re honoured and humbled by the recognition,” Fischer says. “We invested so many years together in advancing cemented carbide technology and trying to develop the most productive solutions for customers.”

A center for science
Sandvik opened its production unit in the Västberga neighbourhood several kilometres southwest of Stockholm’s city center in 1953. It quickly became the leading hub for the evolution of cemented carbide grades for rock tools and wear parts.

When Fischer moved to Sweden from his native Germany, there was little doubt in his mind where he wanted to work.

“Once I was in Peking, China, meeting some customers,” he recalls. “They asked me, ‘You are from Germany, why don’t you work for a German company?’ And I said, ‘When I decided to work with cemented carbide, my wish was to cooperate with Number 1, not any other.’ They respected that.”

Cemented carbide, a powder metallurgical material composed of tungsten carbide grains and a rich metallic cobalt binder, is still the single most important material that makes rock excavation effective and profitable for mining companies. Its unique combination of strength, hardness and toughness makes it an optimal solution for rock drilling, among other tooling and engineering applications.

The introduction of round buttons
Most rock tools produced during the 1960s featured brazed flat inserts. Fischer was instrumental in developing the round buttons that eliminated notorious weak points and would ultimately become the standard for percussion and rotary drilling.

“You now had the ability to use harder carbide in this structure, and thereby also increase the wear resistance,” says Lars-Ola Klockervold, responsible for rock tools at Sandvik Mining. “It’s all about increasing toughness without compromising extreme wear resistance – making material stronger without sacrificing its hardness.

“Not only did this carbide improve bit lifetime, it also dramatically decreased the need for regrinding, reducing a huge cost.”

As tool demands increased during the 1970s, Fischer and a small group continued to develop the carbide and improve its performance. Hartzell joined them in 1974 after working with steel in Sandviken for several years.

“There was something romantic to me about rock drilling,” Hartzell says. “It fascinated me. When I left Sandviken, I felt that cemented carbide was the material of the future.”

Big breakthrough
The trio tested several concepts to improve toughness without any major success before their big breakthroughs began in the late 1980s. 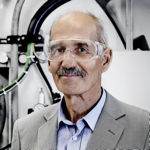 “We knew how the rock bit was performing in the rock and how it would wear, and we had to find something that was harder but also comprised compressive stresses in order to increase the toughness,” Hartzell says. “We started with four or five ideas. We tested different things, and then by coincidence we found this phenomenon with three layers.”

The trio secured four US patents between 1988 and 1995 protecting the new “Dual Property” cemented carbide, in which wear resistance and toughness could be improved independently of each other. Controlled re-distribution of cobalt binder phase several millimetres inside the buttons gave components which contained three distinct microstructural zones.

These gradients, together with their differences in thermal expansion, redistributed internal stresses and enabled creation of a hard, wear-resistant surface layer that was simultaneously pre-loaded with compressive stresses to prevent cracks.

“We were experimenting to create this gradient and suddenly one day we found the right combination of gas atmosphere, temperature and pressure in the furnace,” Åkerman says. “The result was that tools often lived twice as long as conventional tools, especially in percussive rock drilling applications. Customers could drill much longer before the surface zone wore out.”

Conventional cemented carbide had limitations and Fischer and his team needed a very large and even tungsten carbide grain size to improve thermal conductivity and increase toughness. This would enable reduction of the cobalt content to achieve a better wear resistance at high temperatures.

The trio presented a new type of much larger grained tungsten carbide grades and a new manufacturing route, and filed several patents in the late 1990s. Control of grain size and the improved manufacturing method were also used for top hammer and DTH grades, leading to the introduction of a new XT48 grade.

The 1943 development of integral drill steel revolutionized rock drilling, and Sandvik has continuously engineered new rock tools and cemented carbide grades that deliver customers superior performance and lower costs ever since. Decades of extensive research and testing has resulted in the latest generation of carbide grades and larger, stronger, more stable and efficient tools.

Moving on
Åkerman relocated to Zeltweg, Austria in 2000 to father the Sandvik “ICUTROCK” concept and develop mechanical cutting tool solutions for roadheaders and continuous miners, for which he had just developed the super-coarse grades XT70 and XT90. He now works with cutting tool development in the Sandvik MGT team.

All three engineers recently visited Västberga again to tour the production unit and reminisce about the decades they spent together there. Fischer was particularly impressed by the pace of technological evolution during the decade-plus since he retired.

“All these processes that are automated now were all manual,” he says. “Back in 1965, it took 15 people to hand-press the bits that one robot can do now. The development has been marvellous.”

“Even though I’ve only been away a few years, it’s nice to come back and see they’re still using the same processes and that the products we developed are still performing so well,” Hartzell adds.

“I’ve been very happy working with cutting tool development in Zeltweg, but when I come back here to Västberga and see the microscopes, sometimes I wonder why I left,” he says. “That’s my passion. I loved sitting in front of a microscope and looking at structure and exploring ways to do new alloys.

“It’s just a fantastic feeling being back here. Some of this technology used I never could have imagined, at least to this extent. Computers and new instrumentation have enabled much greater control of the processes.”

Inseparable trio
The trio, who remain good friends today, was often inseparable during their tenure at Sandvik. They vacationed together, sailing on Fischer’s boat during the summer and skiing during the winter. They played darts and boule and spent evenings together.

“We made a fantastic team,” Fischer says. “I was the boss but I never played the role of boss. We were a team, and that was most important. We thrived off our different strengths and personalities.

“Torbjörn is analytical – he was our process expert, always testing and asking. Jan is more optimistic, and I was something in between. I always believed in having open eyes and ears. You might have a flawed idea, but you have to be wrong before you find the right way.”

When they weren’t bouncing ideas off one another or other colleagues, they were collaborating with customers out in the field.

“You have to see it in action,” Åkerman says. “When you’re standing there beside the rock and the machine and you look at the bit after a certain number of meters, you start to understand the destruction mechanisms better. Then you also can better analyze in the lab what’s happening. Vectors and formulas are useless if you never see a product in the field.”

The trio’s induction into the International Mining Technology Hall of Fame is recognition of more than a combined century pushing the boundaries of cemented carbide technology and continuously developing raw materials into productive mining solutions.

“It’s recognition of many decades of work – years of experimenting with carbide grades, developing grain shapes, measuring hot hardness, fracture toughness and fatigue strength to get just the right combination of properties,” Fischer says. “We’re very proud. It’s high praise for Sandvik as the leading supplier of rock tools to the mining industry.”

One of the new features of the Rammer Excellence line is the RD3 remote monitoring device, helping to track and mo...

Sandvik has significant new rock tool product launches in the pipeline for tunnelling and mine development applica...

When Udo Fischer first walked into the Sandvik cemented carbide production unit in Västberga in 1965, he wa...

Jastrzębie-Zdrój, Poland. There are no dragons here. No dwarfs or ogres either, but from the dark depths of...

The Borynia-Zofiówka-Jastrzębie mine in Jastrzębie-Zdrój sits at the heart of coking coal mining in Poland,...

[preamble]McArthur River is the world’s top-producing uranium mine, but it’s no wider than two football fie...

Employee safety is always the top priority at Cameco’s McArthur River uranium mine in Northern Saskat...

Cameco’sMcArthur River mine in Saskatchewan is the world’s richest uranium operation. To access...

Located near Jaipur, in Northern India, the Rampura Agucha mine sits on the world’s largest zinc depo...

Rajasthan, India. Many sounds blend together at the Rampura Agucha mine, the world’s largest zinc operation...

A breath of fresh air

Landing in the snow-blanketed town of Skellefteå in north-eastern Sweden, it’s impossible to miss the large...