Saving energy at the source

Wyoming may be the least populous of the 50 United States, but it’s crowded when it comes to coal. Mineral extraction drives the economy in the state, which produces more coal than the next six top-yielding states combined.

Published: 11 July 2013
Share
Home to nine of the top 10 producing coal mines in the country, Wyoming produced 400 million tonnes of the fossil fuel in 2012 — a round-the-clock rate of nearly 13 tonnes every second. The coal-rich Powder River Basin stretching from north-eastern Wyoming to south-eastern Montana accounts for close to half of all U.S. coal and is renowned for a clean, hard product with low moisture, sulphur and ash content.

Wyoming-headquartered Cloud Peak Energy is one of the largest coal producers in the United States. It employs about 1,700 people and operates three surface mines in the coal-rich Powder River Basin, producing more than 82 million tonnes of thermal coal in 2012.

Cloud Peak Energy is one of the largest coal producers in the United States, supplying the country with about 4 percent of its sustainable electricity. The company, which shares its name with a 4,000-metre peak in Wyoming’s sprawling Bighorn Mountains, owns and operates three surface mines in the Powder River Basin.

Cloud Peak Energy shipped more than 82 million tonnes of thermal coal in 2012 — more than the entire state of Kentucky, the third-largest U.S. producer of the mineral that year.

The company’s top producer, Cordero Rojo, ranked third in U.S. coal production in 2012. The mine was formed from the 1997 consolidation of the Cordero mine and the adjoining Caballo Rojo mine.

Cordero Rojo sits at an elevation of 1,400 metres atop the Wyoming prairies 40 kilometres south of Gillette, a city of 30,000 that calls itself the Energy Capital of the Nation. The mine extracts as many as 40 million tonnes a year of subbituminous coal from the Wyodak seam, which ranges in thickness from about 17 to 21 metres.

Trains more than 100 cars long transport 10,000 tonnes of crushed coal at a time along the Burlington Northern and Union Pacific rail networks to electric utility customers in the Midwest and south-eastern United States.

Cordero Rojo uses rotary rigs to drill holes, some deeper than 40 metres, in overburden for cast blasting. Massive draglines or shovels and trucks then strip the overburden, enabling mining to a depth of 90 metres or more.

“How we shoot the material depends on how we’re going to move it,” says Mark Gilbertson, Cloud Peak Energy’s director of asset management. “When we cast blast we use those rotary rigs to drill fairly deep holes at an angle, and then we use the explosives to actually move maybe 30 percent of the material to its final position. Then we put dozers on that cast and push maybe another 30 percent of it downhill, essentially, and then we develop a flat pad that a dragline can operate on to move the remaining 40 percent.”

Cordero Rojo has operated Sandvik rigs since before the turn of the millennium. Its current fleet includes a D60K 3L, an 1190E electric rig and two D75KS machines, one of which has been in operation at the mine for 14 years.

Cloud Peak Energy and Sandvik have built a partnership on a shared commitment to environment, health and safety.

Cloud Peak Energy reduced an already exemplary all-injury frequency rate by 31 percent in 2012. The company joined other National Mining Association members in committing to implement CORESafety, a new programme for U.S. mining operations that aims to eliminate fatalities and reduce injury rates by half within five years.

Cloud Peak Energy has also earned state and national recognition for its environmental efforts, including reclamation and wildlife habitat development. Cordero Rojo, for example, earned recognition for detailed work in designing the reconstruction of a river channel in reclamation.

“We’re very proud of our environmental stewardship,” Gilbertson says. “We set many annual environmental targets and we’re always looking to reduce total energy, whether it’s something as simple as more efficient light fixtures in our buildings or something bigger like reducing fuel consumption in our equipment.”

Sandvik reached out to Gilbertson and Cloud Peak Energy in June 2012 with an attractive proposition that promised to reduce fuel consumption for the mine’s oldest drill. 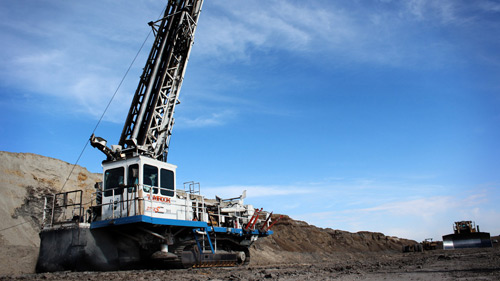 Sandvik has offered its Compressor Management System (CMS) on new rotary blasthole drill rigs since May 2011, and add-on retrofit kits enable machines already in operation to reap the same benefits.

The CMS reduces energy consumption, operating costs and environmental impact by significantly reducing the engine load when not drilling and permitting the compressor to run at full volume only when needed. This drastically cuts diesel consumption during set-up, tramming and pipe handling.

“Less than 40 percent of the energy given to a drill’s compressor is used for breaking rock, which is why a management system can have such a positive financial impact,” says Ken Stapylton, Sandvik’s vice president of rotary and HP DTH drilling.

When the company originally tested its system on a DR460 rotary drill at a coal mine in Australia’s Hunter Valley in 2010, the initial fuel savings were 33 percent.

Looking to replicate those results in the U.S., Sandvik turned to Cloud Peak Energy with an offer the company couldn’t refuse — a one-time performance guarantee that virtually eliminated the operator’s risk.

Sandvik estimated that retrofitting its CMS onto the 14-year-old, 60,000-hour D75KS would reduce fuel consumption by 23 percent, an estimate that factored in an increase in hole width to 11 1/4 inches (28.6 centimetres).

The performance guarantee was simple — if the system delivered at least 90 percent of the fuel savings Sandvik suggested, Cloud Peak Energy would buy it. If the CMS underperformed, Sandvik would remove it at no cost.

”We were confident offering the guarantee, based on our experience and knowledge developed over the past few years with the CMS,” says Tab Siegrist, product support manager surface drilling at Sandvik.

The Engine Control Module showed that the drill used 22.9 gallons of fuel per hour prior to CMS installation. After running the system for five weeks, it used only 16.9 gallons per hour — a 26 percent reduction.

“It just made sense,” Gilbertson says. “Drill engines are loaded all the time. We work on a lot of different kinds of machinery, and drills have always been something that sound like the engine is suffering because it just never gets unloaded. This CMS is a reasonable way to take that load off the engine.”

The system also enables Cordero Rojo to shut down the D75KS when it doesn’t need to be running, an option previously unavailable to the mine during Wyoming’s coldest winter months.

The CMS is available on new rotary blasthole drills and as an add-on retrofit kit that enables machines already in operation to reap the same benefits.

“Trying to start a machine like that in a cold climate is problematic,” Gilbertson says. “We used to waste a lot of fuel because we tended not to shut it off when it was cold, so the machine sits there on the side of the pattern and idles under a fair amount of load. Now we can shut it down because it’s much easier to start. This is the first year that the mechanic who takes care of that machine got through a whole winter without changing any starters or batteries, because it starts like everything else.”

In addition to curbing fuel consumption by as much as 30 percent, the CMS offers added benefits related to a reduced engine load — including longer engine and compressor life, higher drill utilization and lower service costs from extended service intervals.

“We see Cloud Peak Energy’s investment in this new technology as a forward step to not only achieve improvements in the operational costs of drilling equipment but also to address the increasing concerns we all face about the environmental impact of mining operations,” Siegrist says.

Sandvik’s CMS will save Cordero Rojo hundreds of tonnes of carbon emissions annually.

“There is often a cost to being leaders in conservation and environmental excellence, but some of the efforts wind up being positive financial decisions as well,” Gilbertson says. “This was a pretty easy decision that benefits the environment and happens to pay for itself quite quickly.”

Cloud Peak Energy has already purchased two new Sandvik drills with CMS installed for 2013 — a D75KS for Cordero Rojo and a D90KS for its Spring Creek operation in Montana to replace its retired Sandvik Driltech D40KS and D45KS machines.

Gilbertson says the trial success “was a significant factor” in the purchase decisions.

“The CMS on the trial drill continues to be consistently in the range of 25 to 27 percent,” he says. “We’re quite pleased with it.”