At the site, the hot sun is scorching the red sand, and small clouds of dust emit from Maritza López Riviera’s boots as she walks up to a Leopard DI650i drill rig. She began working at La Herradura in 2006 at the age of 19, driving trucks at the mine, later workin her way up to become a surface drill rig operator.

The mining industry has traditionally been firmly male-dominated but diversity and inclusion are top priorities at the Fresnillo Group. López Riviera is one of several women who now operate the new Leopard DI650i at La Herradura.

“What I love about Leopard is that every day I learn new things,” she says. “I learn how to be more productive and how to take care of the machine. I’ve learned that there are issues I can fix myself.”

As dust storms spin up across the desert landscape, López Riviera confidently and precisely operates Leopard DI650i near the bottom of La Herradura – roughly 1,100 yards (one kilometre) from the top of the mine, which spans 1.7 miles (2.7 km) from north to south and 1.3 miles (2.2 km) east to west. Despite the mine’s challenging geology, López Riviera says that Leopard DI650i drill rig is easy to operate.

With Leopard DI650i, Sandvik Mining and Rock Solutions has delivered a high-pressure DTH drill rig designed for larger hole sizes. Leopard DI650i operators report that it is easy to run and has improved safety via the range of intelligent control technology. The drill offers innovative new components, excellent fuel efficiency, improved safety and higher productivity in challenging rock conditions such as those at La Herradura gold mine. In terms of intelligent technology, the latest onboard options include TIM3D drill navigation with wireless data transfer, My Sandvik fleet monitoring system and full-cycle drilling automatics.

“There’s space for you, for your instructor, and the instructor can tell you step by step what to do,” she says and is also quick to point out other benefits. For example, compared with a conventional DTH drill rig, Leopard DI650i can reduce fuel consumption by up to 15 percent, thanks to intelligent control technology. She also stresses the ease of working with TIM3D drill navigation with wireless data transfer.

LEOPARD DI650i DRILL rigs have proven a true asset to the operation at La Herradura. “One of our main goals at Fresnillo Plc is to safeguard the integrity of our employees and machines,” says Gustavo Adolfo Guzmán Loya, a geology specialist. “At first, we did our drilling at 90 degrees, and the material that remained generated a risk of landslides. But now, with Leopard DI650i, we can drill at the natural angle of the structure or modify the angle of the design to eliminate all those types of issues.”

The drill’s precision thus helps maintain the structure of the mine, increasing safety and productivity. “Thanks to Leopard DI650i, we can generate greater stability in the mine,” Guzmán Loya says. “We can modify the drilling at different angles that best suit the natural structure of the rock. We have been able to mitigate or eliminate landslides in areas where they were occurring.”

Previously, he says, the mine experienced the loss of tonnes of material, but thanks to Leopard DI650i, the problem has been eliminated.

CARLOS FABIÁN GONZÁLEZ MEZA, the engineer in charge of the final mine designs, stands at the top of the pit and observes the equipment below. “The challenge is essentially the stability of the site and guaranteeing the security of our employees and the stability of the mining operation,” he says.

Among the major benefits of Leopard DTH rigs is their ability to help keep production safe. At La Herradura, this is especially true for the wall bench stability and control, which are the main task for Leopards in increasing safety based on the pit geology. There are four types of rock at the mine – two igneous, plus shale and sediment – which complicates drilling.

In the distance, the engineers drive slowly down into the mine, following behind a dump truck full of rock. “Given the constant changes in the geology of the mine, Leopard DI650i helps us with the required versatility of drilling,” González Meza says. “There is an unstable area, and with Leopard DI650i you can control the machine remotely. That is a very useful feature.”

When the engineers arrive, López Riviera greets them and climbs into the cabin to start drilling. González Meza, watching, brings up the importance of inclusion and supporting women in mining. “In this group, we have Maritza, and we are also training more women,” he says. 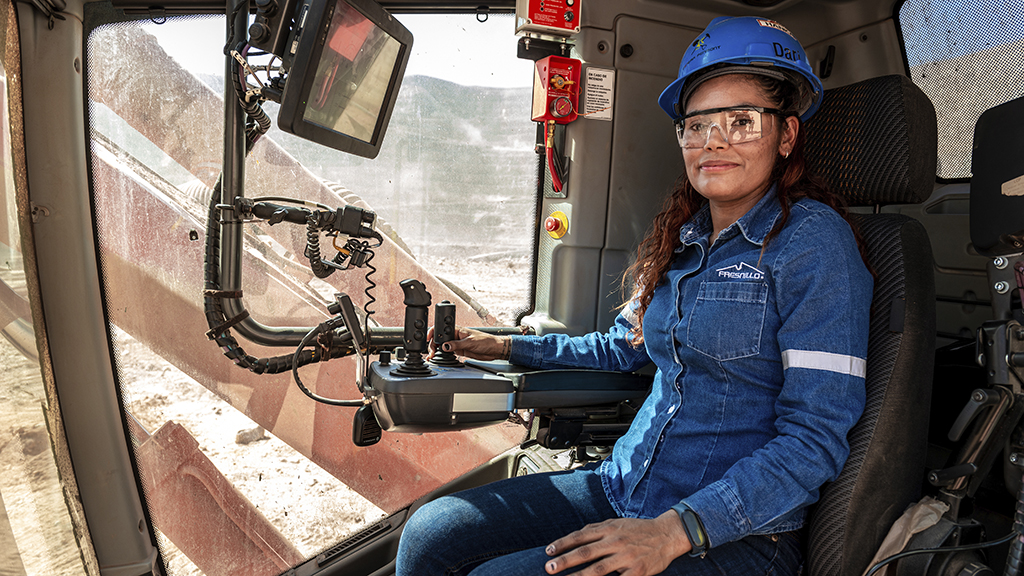 Drill rig operator Maritza López Riviera started working at La Herradura in 2006 at the age of 19.

Increased production maximizes the return on investment of Leopard DI650i. According to operator López Riviera, the automatic and remote drilling features make Leopard DI650i much faster and safer than other machines. “It is more productive than the previous machines,” she says. “We can drill more holes in a day.”

Carlos Alberto Torres Gámez, mine drill and blast chief, agrees with López Riviera that mine safety is a primary goal and is directly tied to productivity.

“Leopard DI650i is cutting-edge and can drill at angles,” he says. “Before using this machine, we drilled the three slopes vertically. It is tremendously important to be able to drill at an angle. The technology Sandvik offered with this tool met our needs.”

Having instructed everyone to prepare to clear the site because of a scheduled blast, Torres Gámez continues, stressing the importance of Sandvik’s technology, training and support. “Because of the incline of the drilling, the best option for us is Sandvik,” he says. “They have the latest technology and provide technical support and personnel who are specialists in these machines. They even provide remote support from Finland. This is an added value which makes Sandvik the best option for drilling.”

Fresnillo PLC  derives significant peace of mind from Sandvik’s comprehensive maintenance contract. “Because we place such importance on the stability of the mine,” engineer González Meza says, “we decided to contract the maintenance experts, in this case, Sandvik employees. We do this to prevent accidents and ensure operative continuity.” 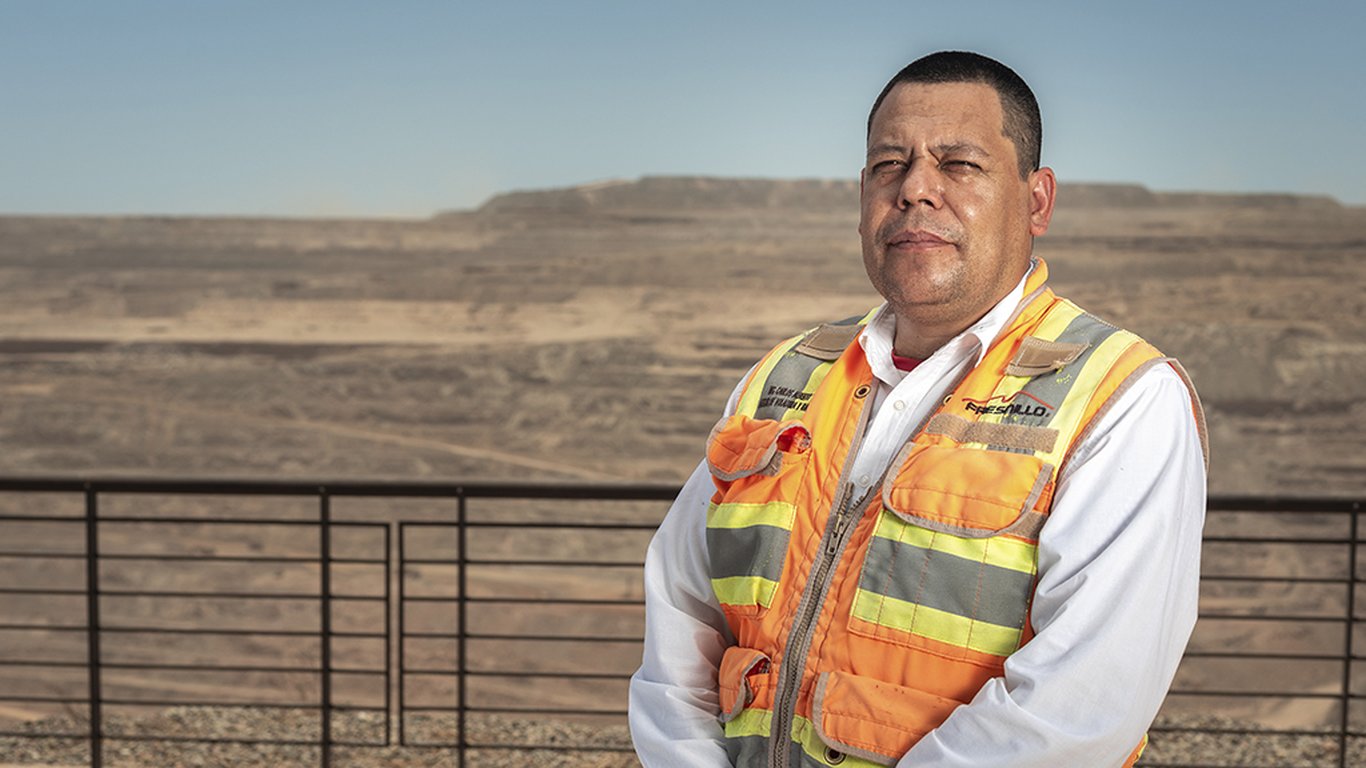 For Carlos Alberto Torres Gámez, the mine drill and blast chief at La Herradura, safety is of utmost importance. 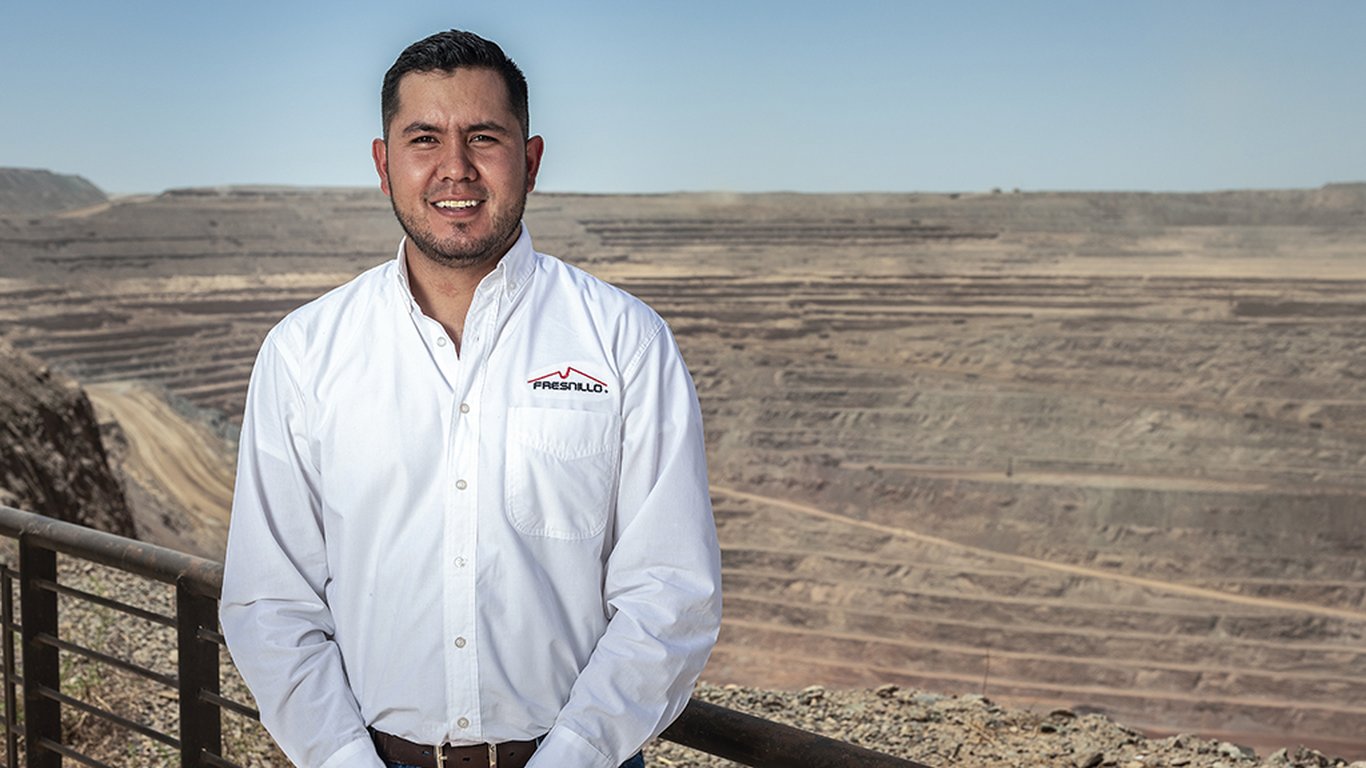 Carlos Fabián González Meza is the engineer in charge of the final mine designs.

Sandvik’s on-site specialists provide the technical support necessary to ensure that Fresnillo Plc can run its operations continuously in a productive, safer and more sustainable manner.

At the end of the day, improving safety at La Herradura is the best way to ensure increased productivity at the mine going forward.

“We would like to reach 100 percent stability at the mine to stop dispersion and to have a 4 percent margin of error,” geology specialist Guzmán Loya says. “I think the innovation Sandvik offers will help us reach our objectives. They are a pioneering company that is betting on technology and innovation, on automation that will increase the manoeuvrability of operations.”

La Herradura, one of Mexico’s largest open-pit gold mines, is owned by Minera Penmont (Fresnillo Plc). The mine, located in the state of Sonora some 80 kilometres north-west of the city of Caborca, produced more than 425,000 gold ounces in 2020 and has a treatment capacity of 364,500 tonnes per day. The mine has been operational since 1997 and employs around 1,600 workers and 1,800 contractors.