With an estimated 100 billion euros’ worth of unexploited minerals sitting submerged in abandoned European mines, the EU-funded underwater mining project ¡VAMOS! aims to discover how to access them.

For centuries Europe has been actively mined, and most of the easily accessible mineral deposits are depleted. Deeper-lying minerals have not been fully explored, though, as they require excavation at greater depths, in small deposits or in populated areas where larger operations are not feasible. It has been estimated that the value of unexploited European mineral resources at a depth of 500 to 1,000 metres is approximately 100 billion euros. ¡VAMOS! – the Viable Al­ter­native Mine Operating System project – is attempting to find new ways to get access to these resources and enable the excavation and rehabilitation of unexploited and abandoned deposits of critical minerals, particularly those hidden under water. “The ¡VAMOS! objective is very straightforward,” says Jenny Rainbird, project manager at BMT group, which is coordinating the project. “It is to build a life-size prototype robotic underwater mining machine with associated launch and recovery equipment, and to prove that the concept of mining in open-cast, water-filled and land-based mines is viable and economically possible.” BMT is a London-based scientific consultancy firm with the administrative role in the project, which involves a consortium of 17 partners from nine European countries. Started in February 2015, the project is scheduled to run for 42 months, and by July 2018 Rainbird and her team should be able to present the outcome. The result is already visible. A prototype submerged mining vehicle has been built in Newcastle upon Tyne in the UK by Soil Machine Dynamics (SMD), which specializes in subsea remotely operated vehicles. The launch and recovery vessel is built by the Damen Shipyards Group in the Netherlands, and the positioning navigation awareness system comes from INESC, the Institute for Systems and Computer Engineering at the University of Porto in Portugal, together with their development partners ZfT and FEMU. Sandvik Mining and Rock Technology provided the cutting equipment and the prototype’s frame.

“I don’t think it would have been possible to run a project like this without the international cooperation, as all partners have cutting-edge expertise in their fields,” Rainbird says. “Like the sensors provided by INESC and the knowledge of virtual reality provided by the marine surveying company BMT – all were necessary to build an unmanned machine that can be operated from the surface.” The outcome is an underwater robot that will circle around the mining machine, gathering data to give a complete picture of what’s going on under water. “The development of this new sensing technology may well be the most important part of the project,” Rainbird says. “There is zero visibility while mining under water, as the cutting will disturb the water with fine sediments.” Three of the larger industrial organizations, Sandvik Mining and Rock Technology, Damen and SMD, have already worked together on a marine mining project for Nautilus Minerals, where Sandvik provided the cutting units for the world’s first deep sea mining equipment.

The ¡VAMOS! project is part of the European Union’s framework programme Horizon 2020, the biggest research and innovation programme funded by the EU, with nearly EUR 80 billion available over seven years (2014-2020). The aim of the initiative is to secure Europe’s global competitiveness, drive economic growth and create jobs by investing in technical breakthroughs and world firsts by taking great ideas from the lab to the market. The ¡VAMOS! consortium was granted funding for its proposal on “Mining of Small and Complex Deposits and Alternative Mining” under grant number 642477.

“The idea of ¡VAMOS! was inspired by the Nautilus project, which is one of the most important currently ongoing marine mining projects,” says Uwe Restner, product and commercial manager, hard rock continuous mining and mechanical cutting at Sandvik. “As Sandvik wants to keep a foot in the door for the future submerged mining market, we were keen to participate in ¡VAMOS! as this is a project that pushes for further innovation in the mining equipment sector.” The initial proposal was that Sandvik should supply just the cutting equipment, but at an early stage SMD asked Sandvik to make the frame for the underwater mining vehicle as well. “While doing the frame we ended up supplying the whole base unit containing the frame, the cutting unit at the front and the back stabilization,” Restner says. The manufacturing has required a lot of modifications to standards, but even if the partners are based in different countries there have been very few technical glitches, and nothing too big to rectify on site. “The technical coordination has been challenging, but the fact that a lot of new technology is involved is also a huge benefit,” Restner says. “¡VAMOS! is a technical demonstration of how different subsystems can work together. The result is a fully remote-controlled and reliable mining system with a built-in evacuation plan to make sure no equipment is lost in operation.” Besides being a testing ground for new mining technology, the project is expected to yield many other positive outcomes. Mining under water means minimal waste-removal cost compared with open-cut mining. There are minimal dewatering costs, minimum costs for barrier construction or barrier maintenance, and no drawdown on aquifers that can affect groundwater or neighbouring areas. “And there will be no blasting noise, no ground vibration, no dust nuisance, no personnel in the mine, and it will be a quicker set-up with cheaper capital costs than in an underground mine,” Restner says. 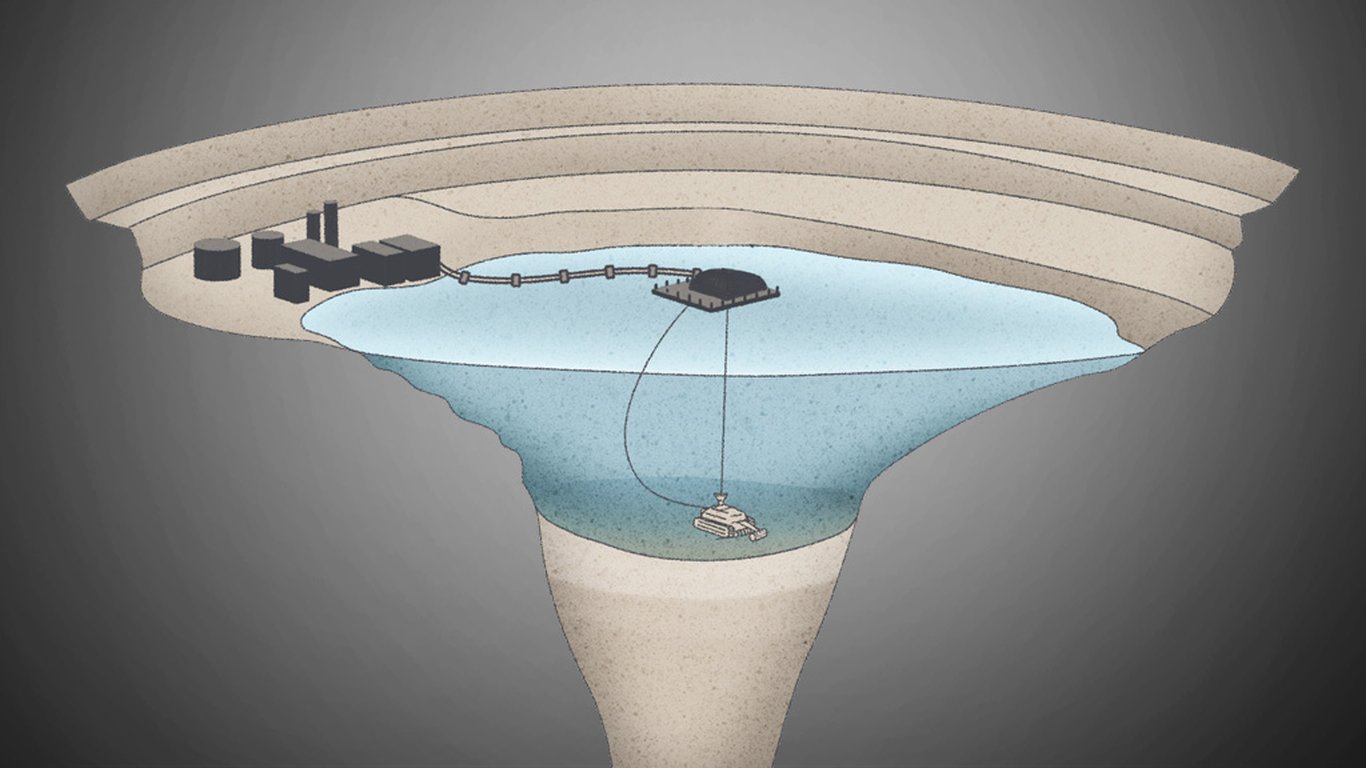 This is a cross section of how the system set-up could look, if used in a previously abandoned open pit mine where the remaining ore was too deep to continue mining. This new system makes it possible to go deeper. 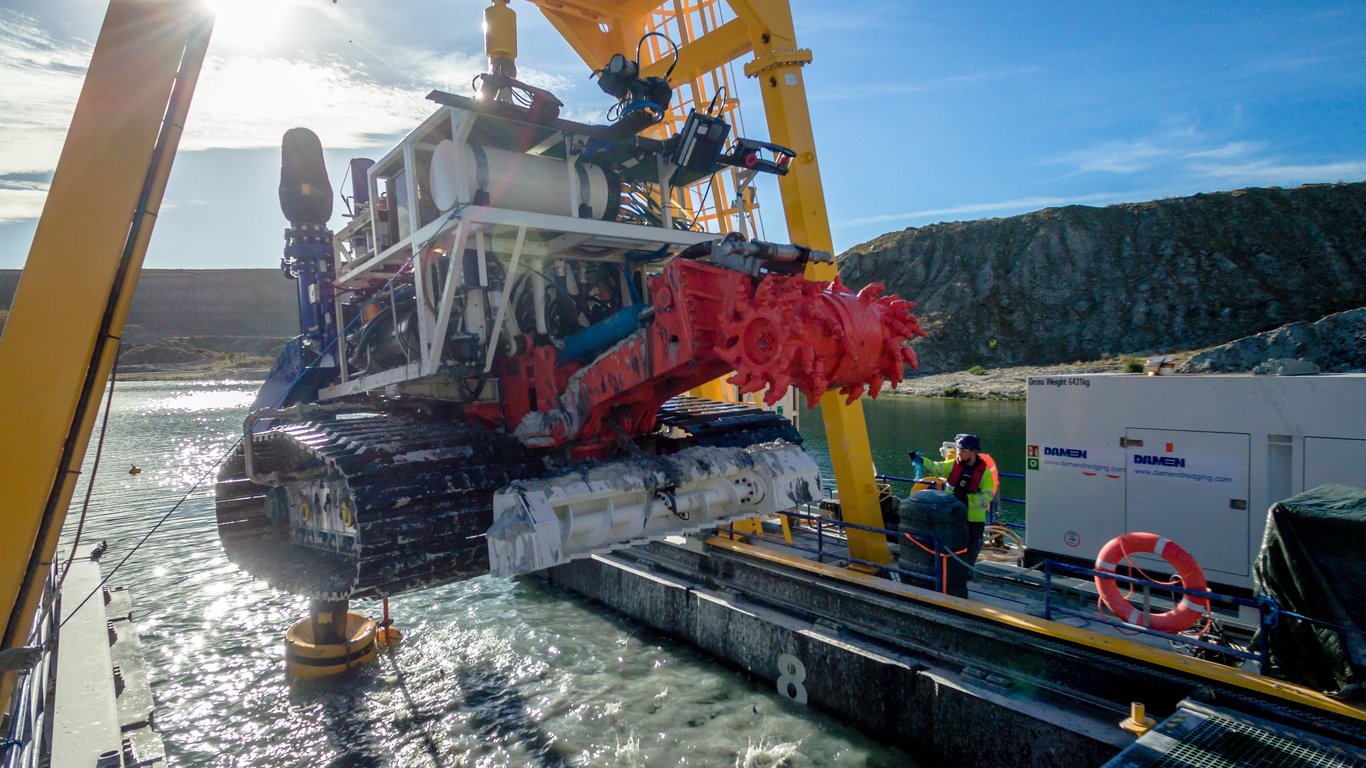 The ¡VAMOS! mining system was successfully tested in a flooded kaolin mine at Lee Moor in Devon, UK in late 2017.

The estimated cost of the ¡VAMOS! project is EUR 12.6 million, of which EUR 9.2 million comes from grants and the rest is funded by the consortium. All those involved have high hopes for the return on investment. “It is very difficult to predict the return because it also strongly depends on the future of the raw materials market,” says Marco Recchioni, project adviser at the Executive Agency for Small and Medium-sized Enterprises of the European Commission. “One of the key advantages of having a common research programme like this is to facilitate that cooperation among private and public entities worldwide. One of the biggest challenges for a research and innovation action like ¡VAMOS! is usually to bridge the gap between the project results and the market. The EU is providing plenty of opportunities to support similar initiatives to fill this gap. Some examples are the Horizon 2020 Innovation Action topics, EIT RawMaterials and the European Investment Fund.” The ¡VAMOS! mining system was successfully tested in a flooded kaolin mine at Lee Moor in Devon, UK in late 2017. The system will be tested again in the first half of 2018 on harder rock, in a water-filled haematite and siderite open-pit mine in Vareš in Bosnia and Herzegovina. “Another very positive aspect of the Horizon 2020 research programme is that each partner will be able to exploit their proprietary results as they prefer,” Recchioni says. “This enables a cascade of positive impacts, increasing competitiveness and creating numerous new jobs not only in mining and equipment manufacturing industries, but also in many other neighbouring sectors.” Rainbird agrees. “There is quite a potential in European open-cast mines for the 20 critical minerals where the EU only supplies very small portions, but there are also many other uses where the prototype can be useful,” she says. “For example, working on submerged tunnels, water mines that have ore underground, or any type of treacherous conditions where you can imagine that an unmanned vehicle could be used.” The current configuration of the prototype has a changeable pick attachment, and attaching a grabber could make it useful for completely different applications. “The big strength of this prototype is that it’s quite small and very agile,” Rainbird says. “The purpose has never been to excavate in tonnes but to cherry-pick the most expensive and rare materials.”