KAMLOOPS, BRITISH COLUMBIA. An automated loading solution has enabled Canada’s only block cave mine to mitigate mud rush hazards and improve productivity – and it paid for itself in less than two months.

Tonnage is tantamount to profitability at New Gold’s New Afton mine in south-central British Columbia. The mine has moved and milled as many as 22,000 tonnes of ore in a single day and routinely extracts 18,500 from Canada’s only block cave.

Like other prolific block caves, New Afton enjoys enviable efficiency at extremely low operating costs. But the mine has also had to conquer one of the biggest block cave challenges: mud rush.

Mitigating mud rush hazards was the major motivation for implementing automated loading at New Afton. As the block cave grew, more and more drawpoints became finely fragmented and wet. By 2016, one in five drawpoints were assessed as high-risk. To ensure operator safety, New Afton stopped manual mucking in those drawpoints and implemented line-of-sight tele-remote loading.

“When 20 percent of your ore source needs to be remotely mucked, you run the risk that you can’t supply your mill with adequate tonnages,” says mine manager Peter Prochotsky, who joined New Afton in 2009 as a mining engineer and has seen the operation grow from a development project into Canada’s highest-tonnage underground mine. “The line-of-sight systems just weren’t keeping up with the growing production demand over the years and we needed a new way of doing things.”

New Afton conducted an engineering study in late 2016 to assess the potential value of implementing automated production loading to overcome the production constraint caused by line-of-sight, as well as further improve safety.

The mine trialed an AutoMine-equipped Sandvik LH514 for one month in early 2017. Although the 14-tonne loader proved too long for some of the cave’s tighter turns, New Afton estimated impressive cycle times and buckets per

”I think that Sandvik has the best system on the market, and it’s really because they have the total package

shift for a smaller Sandvik LH410 based on the trial performance of Sandvik LH514. The mine calculated that an automated Sandvik LH410 had the potential to muck 75 more buckets each shift than the existing remote solution, a productivity increase of more than 55 percent.

“To transition from a line-of-sight solution to an automated solution, we calculated a 54-day payback period,” Prochotsky says. “If we continued using line-of-sight tele-remotes, that production loss was, essentially over 54 days, the value of a brand new Sandvik LH410. And we obviously made the choice pretty quickly that it was the right way to go.”

“We needed to figure out the infrastructure, figure out the Wi-Fi, where we were going to put antennae points, how far apart they had to be, and then teach the loader its path and dial everything in to get it running efficiently,” says Garner, who previously gained experience with tele-remote loaders in Indonesia. “TJ brought computer skills and did all the groundwork in the operator’s room while I was out there in the drive running the loader, showing it what we wanted it to do.”

Located approximately 350 kilometres northeast of Vancouver and 10 kilometres from regional hub Kamloops in south-central British Columbia, the New Afton underground mine occupies the site of the historic Afton open pit mine, which Teck Resources operated from 1977 to 1997. An exploration company took over the site in 1999 and investigated the feasibility of a block cave mine under the old open pit. Through mergers, that exploration company became New Gold. Development of New Afton began via decline ramp in 2007 and the mine reached commercial production in 2012. The mine, which employs a workforce of approximately 450, produced 77,329 ounces of gold and 85.1 million pounds of copper in 2018.

Sandvik provided initial engineering assistance, starting system implementation in the west cave that Williams was able to replicate himself in the east cave.

“The infrastructure is relatively simple,” he says. “Sandvik provided excellent documentation that we followed to a ‘t’ and I picked things up along the way working with their engineers. The overall process of installation was pretty straightforward. I like how simple the overall experience of mapping a drive is. You use the live scanners, you use your laptop, and there’s not a lot involved. The system is designed to move very easy. That’s what I appreciate about it.”

Within a week of commissioning in late 2017, the first of the mine’s two automated Sandvik LH410s was already proving significantly more productive than the tele-remote solution.

An average 100-metre tram from a drawpoint to an ore pass was 60 percent faster with the automated system than line-of-sight.

Williams says most of the mine’s line-of-sight operators were comfortable running AutoMine within five days.

“The Sandvik automated loaders are much more technologically advanced than the competitor loaders featuring aftermarket line-of-sight, but the learning curve wasn’t steep,” he says. “Everybody picked it up really easy.”

New Afton initially used its Sandvik LH410s for production mucking on the mine’s extraction level, one of the block cave’s five main underground levels. The mine’s shortest trams are within three or four metres of the ore pass and the longest current tram is around 150 metres. The average tram distance between drawpoint and ore pass is only 75 metres, limiting automation’s benefits.

“The longer the distance from drawpoint to ore pass, the faster the loader can tram and complete a cycle and the greater the value of automation,” Prochotsky says. 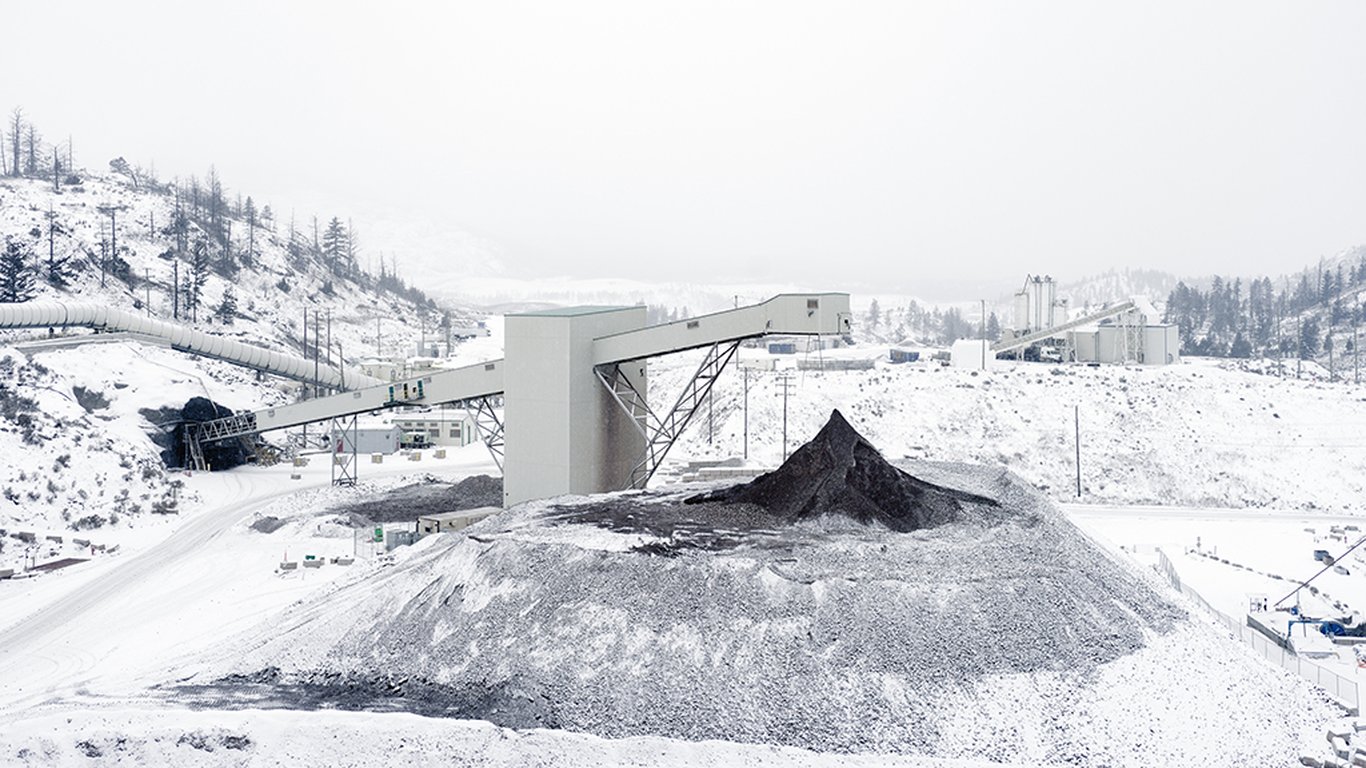 The underground operation at New Afton is expected to produce, on average, 85,000 ounces of gold and 75 million pounds of copper per year over its mine life. 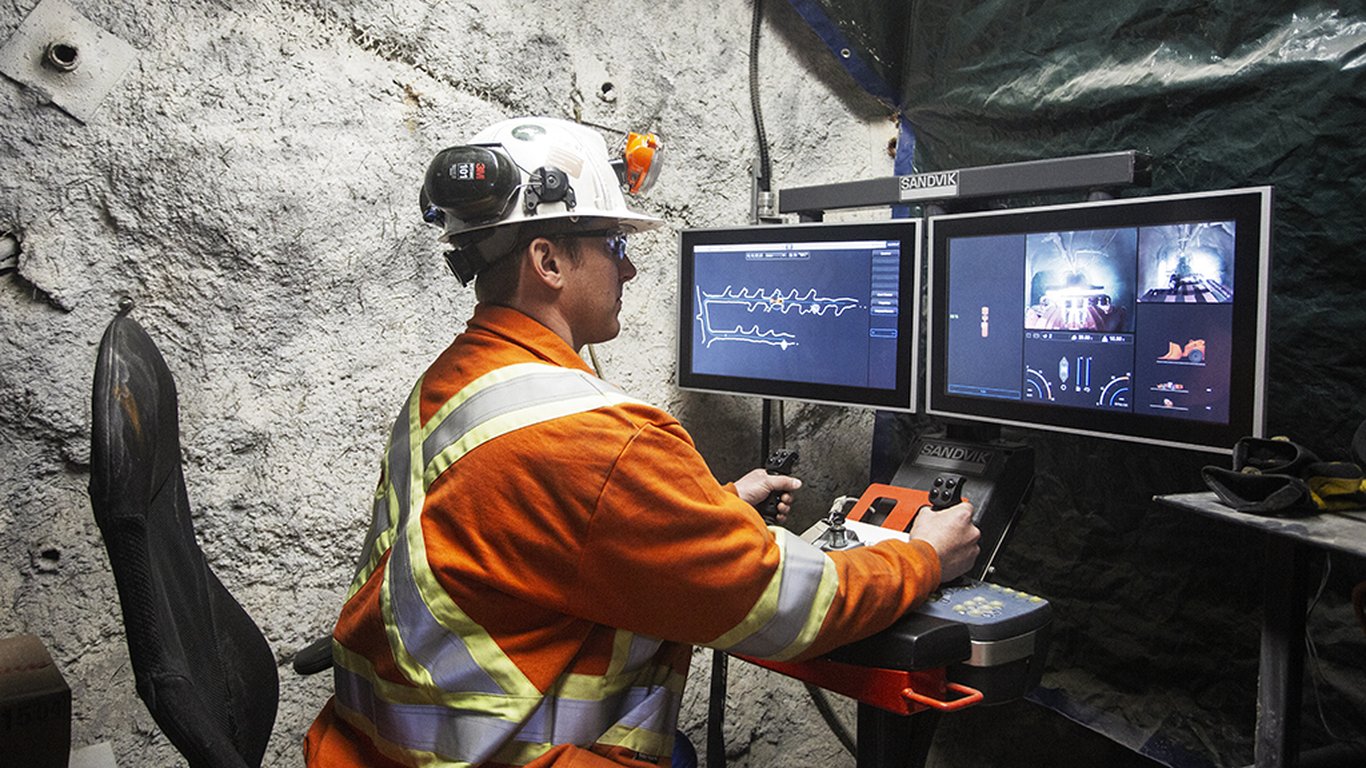 “At the end of the day the tonnes moved by a manual loader and an automated loader are very similar,” Prochotsky says.

On top of recouping the investment cost of the automated loader in less than two months of operation, New Afton has experienced equipment health benefits on its bottom line. AutoMine steers the loader with pinpoint precision and its collision avoidance features help eliminate damage while enabling high speeds that accelerate overall cycle time.

“We used to do about $10,000 of collision damage per loader per month, directly related to operating our line-of-sight loaders in a tight environment,” Prochotsky says. “This cost has dropped to zero thanks to AutoMine.”

The mine has also realized a 30 percent increase in tire life on the automated Sandvik LH410s compared to the mine’s other 10-tonne loaders.

“We think that’s really going to enable us to unlock the productivity benefits of automation,” Prochotsky says. “The gains we expect to see from this change should more than close the narrow gap between manual and automated mucking productivity. This will also be a huge improvement in workplace quality for our operators and will enable 24-hour production, even when we’re blasting.”

While New Afton focused almost solely on production during 2018, this year the mine has restarted development – as many as 450 metres per month – to access a new zone that is expected to extend mine life to 2030. New Afton must maintain the same 18,500-tonne daily output despite three fewer operating hours due to twice-daily blasting. Running AutoMine from surface enables New Afton to solve this challenge, too.

“We’ll keep our block cave productive by using an automated loader to muck our development rounds through blast clearing delays”.

Canadian-focused intermediate miner New Gold operates the New Afton mine in British Columbia and the Rainy River mine in Ontario. New Gold also owns 100 percent of the Blackwater project in British Columbia and operates the Cerro San Pedro mine in Mexico, which transitioned to the reclamation phase in 2018. New Gold produced 315,483 ounces of gold and 85.1 million pounds of copper from continuing operations in 2018.

Prochotsky says. “If we can save 90 minutes in each shift, that’s a huge efficiency gain that also de-risks the project.”

Prochotsky contends New Afton couldn’t have implemented automated loading at a more ideal time. The mine is entering a new phase in its life and building a new extraction level, with drawbells expected to come online in 2021.

“The opportunity to take your learnings and put them into action happens infrequently in block cave mines, as a new level is only developed every five to 10 years,” he says. “We’re fortunate that we brought the AutoMine system in at really the perfect time for us, to learn how to use it for maximum benefit and position ourselves to take full advantage of it in future mine design.

For New Afton, AutoMine has proven to be the complete automation solution management assessed it to be.

“If another mine manager came to me and asked me who they should automate with, I think that Sandvik has the best system on the market, and it’s really because they have the total package,” Prochotsky says. “They’ve got field service representatives available to come to your site to help train your people, they’ve got great safety documentation that allows you to make sure there won’t be any incidents or accidents underground, and they’ve got a product that works. It’s a pretty simple solution in my mind.”