Bulky biz in the lignite pit

Bükkábrány, Hungary.Eight million years ago, a forest of swamp cypress trees as tall as 40 metres towered above what is today an opencast lignite mine providing fuel for one of Hungary’s largest power plants.

First of its kind

As mining in the Bükkábrány pit moved into an area where Mátrai had to strip a growing amount of overburden to access the underlying lignite seam, the company demanded a unique excavator to expand capacity, boost productivity and decrease reliance on costly shovel-and-truck operations.

Sandvik designed and built the first-of-its-kind PE100, the world’s largest compact bucket wheel excavator with a theoretical hourly capacity of 6,700 cubic metres. At an annual capacity of around 12 million cubic metres, the PE100 works in tandem with the PB100 beltwagon and boasts more than double the lignite-stripping capacity of other excavators used in Bükkábrány.

Archaeologists discovered 16 preserved cypress trunks on the lowest level of the Bükkábrány pit in north-eastern Hungary several years ago.

While most of the ancient forest turned to coal during the Miocene period, a suspected sandstorm covered some of the massive trees, preventing the wood from becoming fossilized. The first European discovery of such old trees in their original location excited scientists, who can learn about the Earth’s climate during the period.

Around the time that the most-intact trunks were extracted from Bükkábrány and transported to museums for preservation, in mid-2007, the mine’s owner, Mátrai Erőmű (Matra Power Plant), contracted with the Austrian branch of Sandvik Mining Systems on the world’s largest compact bucket-wheel excavator (BWE) PE100 with a beltwagon PB100.

Mátrai operates two opencast mines to produce the 8.5 million annual tonnes of lignite required for continuous operation of its 950-MW power plant, the largest such operation in Hungary. The plant produces more than 15 percent of Hungary’s energy demand, a vital domestic operation in a country of 10 million people who rely on Russian natural gas and other foreign imports for as much as 70 percent of their primary energy needs.

Lignite, sometimes referred to as brown coal, has a high moisture content and is used primarily as fuel for steam-electric power generation.

Sixty percent of Mátrai’s lignite comes from the larger pit in Visonta, about 90 kilometres north-east of Budapest. That lignite, with lower heating value, is conveyed a short distance to the neighbouring power plant and mixed with a higher heating value lignite that is transported 60 kilometres by train from the younger Bükkábrány pit.

As mining moved into an area where the overburden covering the lignite continued to increase, Mátrai sought a unique excavator to increase production capacity and boost productivity.

“We already had all the other equipment in the pit,” Mátrai mining strategic director Barnabás Derekas says. “We had our belt systems and a spreader. We were searching for a big machine because over time it became clear that continued cutting would be significantly cheaper than shovel-and-truck in our operation.”

Needing an annual capacity of around 12 million cubic metres, Mátrai estimated calculations for the capital investment and operating and maintenance costs of a new BWE. The company initiated negotiations with prominent suppliers in Europe, assigning different percentages of importance to three crucial criteria: price, technical specifications and payment conditions.

Mátrai consulted experts in complex excavator projects at German utilities company RWE. Sandvik representatives for various parts of the machine met with Mátrai and RWE every other week for several months to plan details.

Components for the excavator were manufactured partly in Hungary and partly in other countries across Europe. As many as 130 erectors worked on site daily for almost nine months to build the PE100 excavator and accompanying PB100 beltwagon, which went into production ahead of schedule in mid-2009.

Mátrai conducted a series of capacity and performance tests over different durations, and the machine achieved all targets established in the contract two years earlier.

“Sandvik built up a very unique machine for the deadline,” Derekas says. “When it was finished and went from the job site into the pit it started running immediately and produced the contracted values. We were very pleased.”

Shrouded in fog early one winter morning, the sheer size of the 1,650-tonne PE100 becomes clear as the sun starts to creep over the edge of the Bükkábrány pit and the mist begins to lift.

The excavator boasts a theoretical capacity of 6,700 cubic metres per hour — more than twice that of the three smaller excavators in operation at Bükkábrány — though actual capacity is limited by the width of the conveyor system and capacity of a spreader at the other end.

The excavator’s steel boom is 28 metres long and features a 12-metre-wide wheel fitted with 16 buckets. It works in parallel with a crawler-mounted beltwagon that overcomes high bench changes, conveying overburden an additional 50 metres to one of Bükkábrány’s three conveyor systems.

Bükkábrány has to remove as many as 26 million cubic metres of overburden to produce 3.5 million tonnes of lignite annually. The first 20 metres of overburden are a mix of dirt and soft, wet clay. Beneath the clay is a layer of sand with the occasional thin line of coal, but the primary coal seam is even deeper.

The PE100 enables operators to select specific programs for cutting the different types of overburden, since each requires unique cutting forces and rotating speeds.

“It’s an easy system,” says Imre Papp, an excavator operator who has been working with the system since its birth. “The interfaces are very user-friendly. Everything is clear for the operators. We never have any issues with the operation.”

Unlike Bükkábrány’s other excavators that require the cutting level to be set manually, Sandvik’s solution features a system that can automatically cut the appropriate level based on GPS coordinates. Mining engineers in an office use AutoCAD (computer aided design) software to plan cutting points and upload the data to a GPS system in the excavator’s cabin.

“When we upload the data into the GPS system we manually set to the zero level, and the machine calibrates automatically,” operator Zoltan Toth says.

An odometer in the operator’s cabin shows it has travelled more than 550 kilometres in less than four years — at a maximum speed of six metres per minute.

“We don’t have to worry about speeding here,” Toth jokes, drawing a laugh from Simon Csaba, chief of Bükkábrány’s maintenance department. 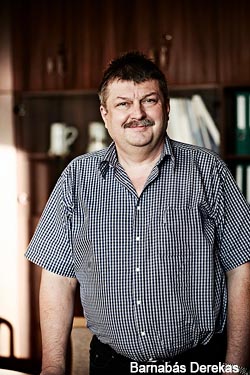 A bulletin board in Csaba’s office a few hundred metres from the pit is plastered with pictures of the excavator being built and in operation. Across the room, his laptop receives live transmissions of technical parameters of the excavator and the other 12 machines he’s responsible for ensuring operate smoothly.

“We’ve had no problems with the Sandvik machine,” Csaba says. “In the tender description we said we wanted a ‘maintenance-free’ solution, and this machine has really pleased me from a maintenance standpoint. I have a lot of machines to take care of, and this has lived up to my expectations.”

Bükkábrány’s proven lignite reserves are about 400 million tonnes — around a century at current production rates — and Sandvik’s system figures to help Mátrai access much of that.

The primary steer structure is designed to operate for 40 years, and the theoretical lifetime of the bearing in the bucket wheel’s main gearbox is 50,000 working hours without maintenance — around 12 years at the current 4,800 planned working hours per year.

“Our mining systems are built to last, and this one-of-a-kind BWE is no exception,” says Claus Butter, Sandvik’s lead engineer for the project. “This excavator is just getting started at Bükkábrány.”