MPUMALANGA PROVINCE, SOUTH AFRICA. A new automation-ready blasthole drill rig is helping a South African coal operation make quick work of its overburden to unlock a new resource and extend its life of mine.

Mafube means “dawning of the new day” in Sesotho, and the aptly-named Mafube colliery in South Africa’s Witbank coalfield has indeed entered a new era.

The 50-50 joint venture between Anglo American and Exxaro Resources commenced operation in 2007, producing high-quality thermal export coal and a lower-grade product for a nearby power station.

Mafube had depleted its Springboklaagte reserve by the end of 2018 and initiated a project to bring the nearby Nooitgedacht resource into production, thereby extending mine life to at least 2032. Following the procurement of equipment and the installation of a seven-kilometre overland conveyor to move new ROM product to the washing plant at Springboklaagte for processing, the Nooitgedacht pit began producing mid-2018.

While many similar operations use draglines for overburden stripping, Mafube is among the few coal mines in the country to move its waste with rollover dozing. Overburden is bulldozed back into the first cut from the next cut, enabling the continuous rehabbing of mined-out areas while a modest truck and shovel fleet excavates the exposed coal.

“All mining activities after drilling rely on accuracy of the drilled pattern,” he says. “If you don’t get the drilling right, you’re likely going to have a bad blast and then you don’t have a good cast.

Designed for dependable drilling in both soft and hard rock, the automation-ready Sandvik DR412i blasthole drill rig delivers high rotary power and feed force. Capable of drilling holes with a diameter of 216-311 millimetres (8.5-12.25 inches) down to a maximum multi-pass depth of 75 metres (246 feet), Sandvik DR412i can be fitted for both down-the-hole and rotary drilling and delivers greater penetration at lower operating costs. Its drill-to-depth feature enhances efficiency and productivity.

We move about 30 percent of the overburden material with cast blasting, and doze 70 percent of the remaining material to truck and shovel bench or doze to coal, depending on the depth of the coal. So drilling is very key to our operation.”

When Mafube transitioned from Springboklaagte to Nooitgedacht, it brought over two aging Sandvik D25KS drill rigs from the original resource. Together, these rigs have amassed more than 70,000 engine hours since they were commissioned at the start of the operation in 2007.

“Those rigs have definitely done their part over the years and they are still performing reliably,” Botsheleng says. “We didn’t scrap them when they reached their expected life and we are still getting good metres sweating those assets.”

Mafube identified the need to invest in a dedicated overburden rig for Nooitgedacht. Frikkie Fourie, the drill and blast specialist for Anglo American’s coal business, says an automation-ready solution was paramount.

“When we went out to the market, one of the key drivers was to see how far the OEMs had come and how ready they are when it comes to automation,” Fourie says.

Several other strengths allured mine management.

”The automation, GPS positioning, operator assist functionality and auto-levelling made it right for our operation.

Fourie says Mafube invested in a larger, more advanced drill than it immediately needed in order to “future-proof” the operation.

“We went for an over-specced machine in part to save on the usage, meaning less wear and tear on the compressor, the engine and some of the components,” he says. “And as the life of the mine progresses, we’re also going deeper. So we’re already set up. It’s more than we need for the next two or three years, but going into the future, we’re all squared away.”

Sandvik DR412i was commissioned in August 2018, and the supplier worked closely with Mafube to address and overcome some early hurdles.

“Like with any new thing that you buy, there’s always some challenges,” Fourie says. “We got it resolved. With a lot of work between the two different stakeholders, we got a very good result out of it. The machine is performing really, really well at this point in time. Very reliable. Great work between the two companies.”

Limited wireless network connectivity in the pit exacerbated some of the initial technical issues.

“We had hiccups in the beginning but now it’s exceeding set targets,” Botsheleng says. “We battled for four months with the drill, but now it’s breaking records.” 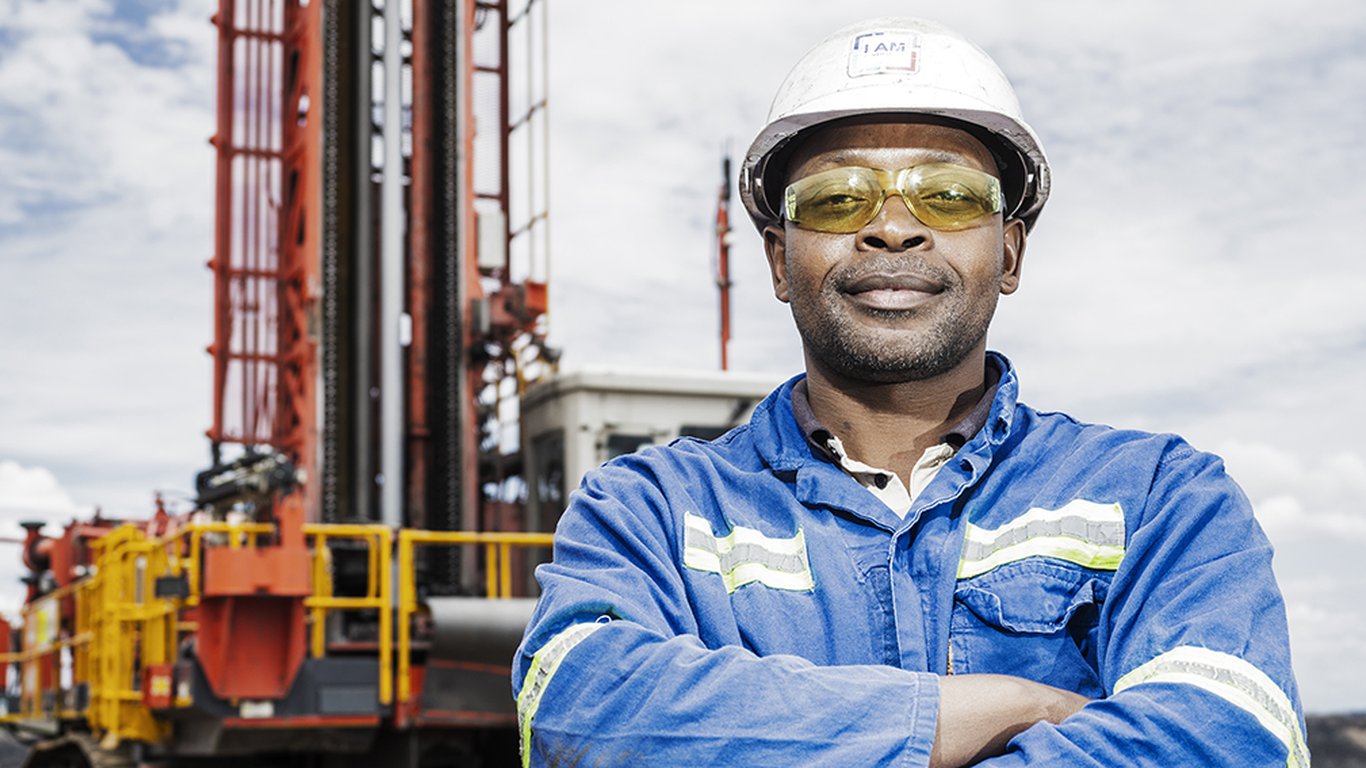 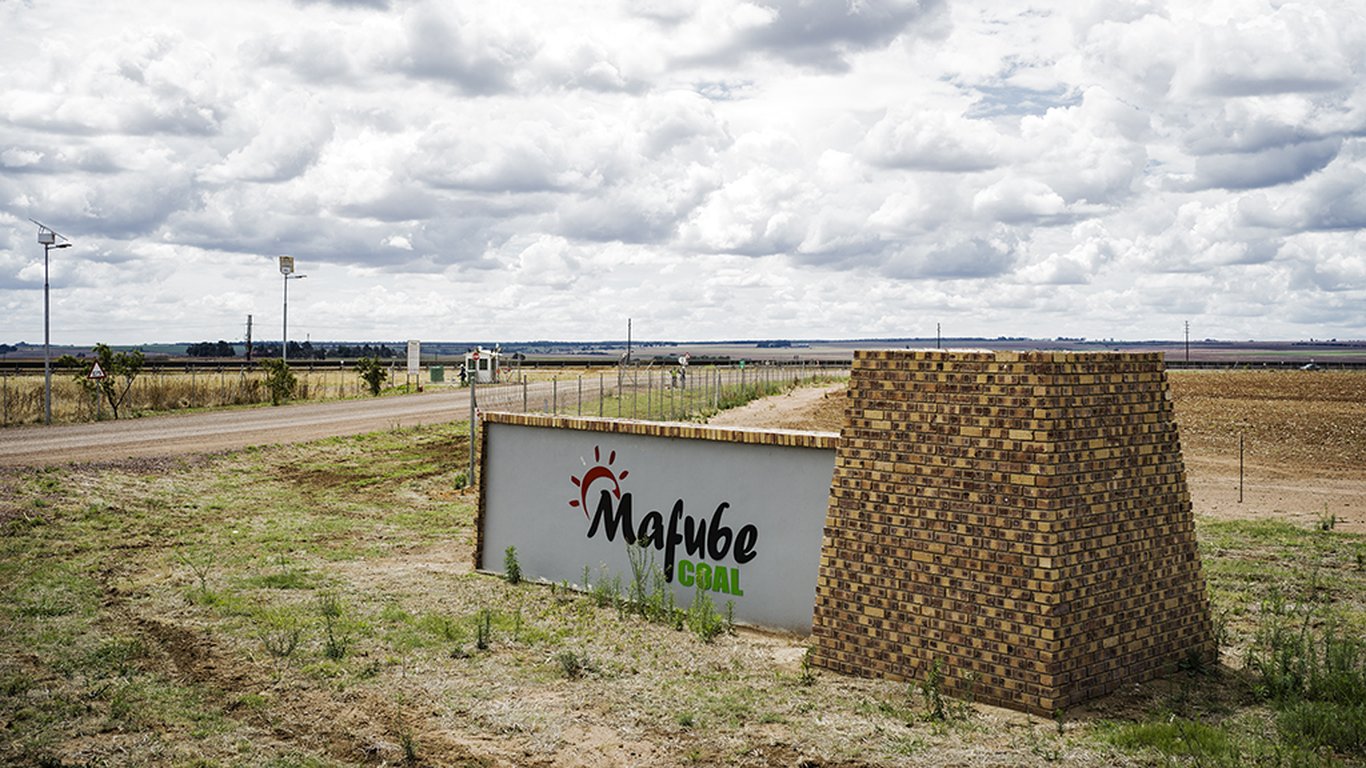 Mafube had depleted its Springboklaagte reserve by the end of 2018 and initiated a project to bring the nearby Nooitgedacht resource into production, thereby extending mine life to at least 2032. 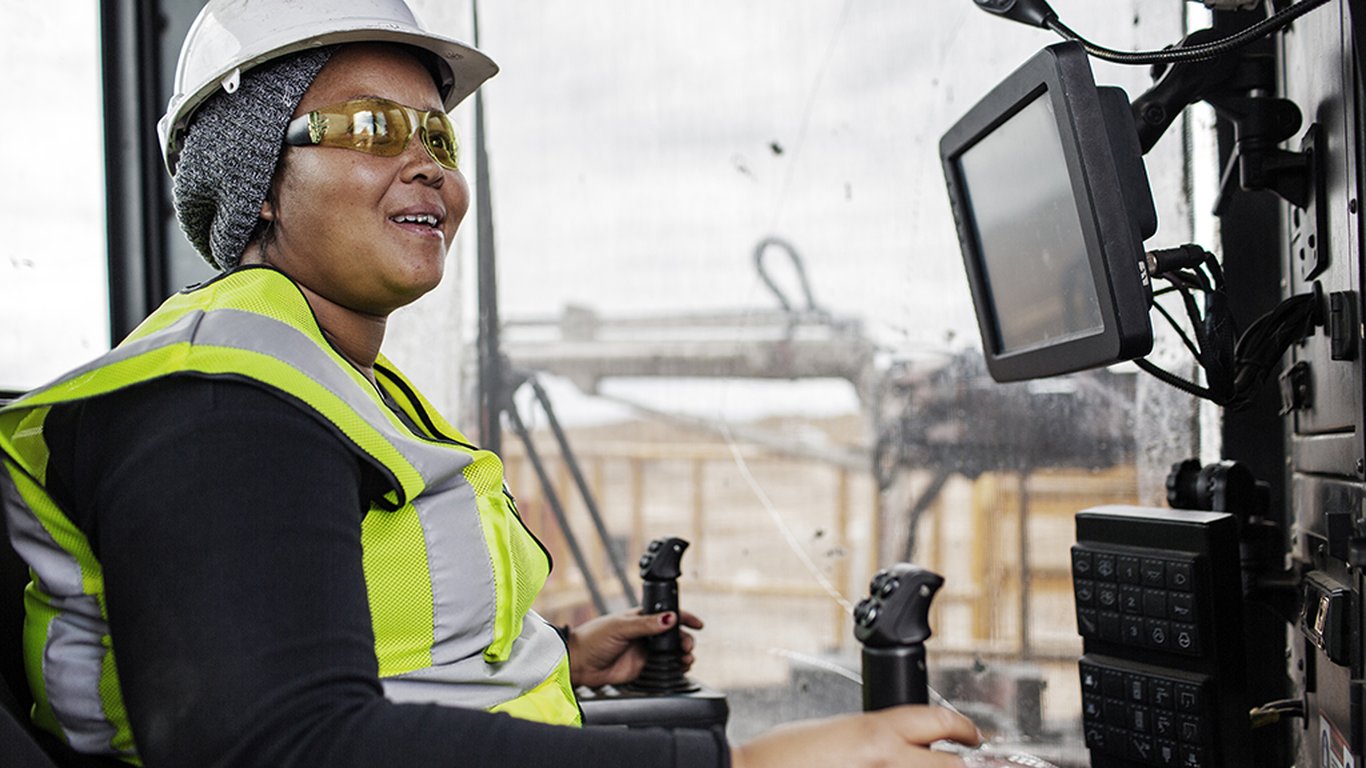 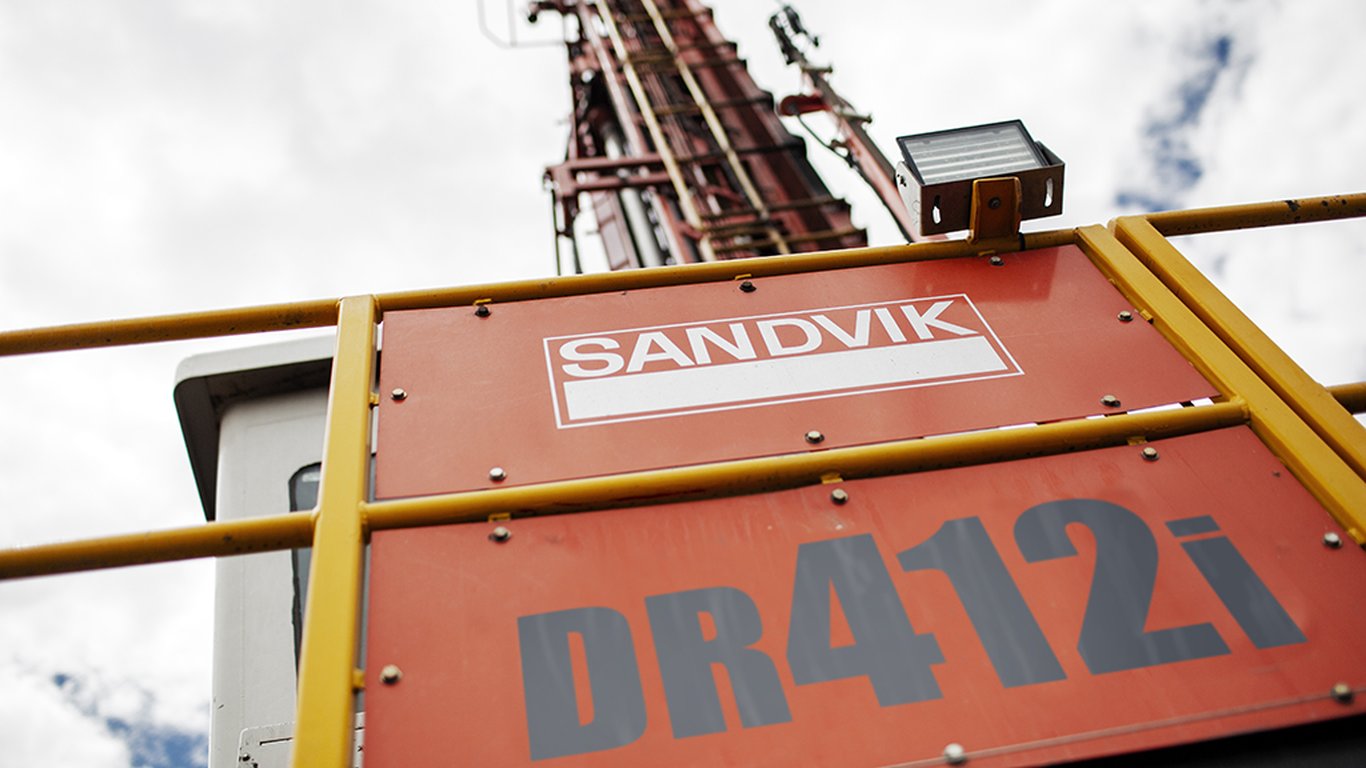 Mafube invested in a larger, more advanced drill than it immediately needed in order to “future-proof” the operation.

“We use one-touch levelling, one-touch drilling,” Fourie says. “The guys who are utilizing it are giving us very good, continuous results. Mean time between failure is really big hours, we’re talking now days. We’re happy where we have it.”

The multi-pass rig’s low-pressure configuration is set for Mafube’s soft rock and features Sandvik’s Compressor Management System, designed to reduce diesel consumption by as much as 30 percent while extending maintenance intervals and engine and compressor life.

“It’s fuel-efficient,” Botsheleng says. “Of all of the machines that we bought for the mine extension, this machine is sitting almost at the bottom in terms of fuel consumption. We thought it was going to use more diesel.”

Sandvik DR412i features a GPS-based 3D navigation system that provides hole accuracy within five centimetres, both for location and depth.

Located about 180 kilometres east of Johannesburg and 25 kilometres east of the town Middleburg, Mafube Coal is a 50/50 joint venture between Anglo American and Exxaro Resources. The operation produced around 5.3 million tonnes of coal in 2019 and reserves are estimated to last until at least 2032. Mafube Coal has around 350 permanent employees and 550 contractors.

“It’s exciting for our operators because the machine is comfortable; they just press a few buttons and don’t need to wait for surveyors to stake cups on the bench,’” Botsheleng says. “So the 3D GPS is working very well for us.”

“The planner sends the plan to the drill from his office, which is very lekker for him,” Botsheleng says. “Some days he even sends it from home. Accuracy is about 98 percent. Our surveyors can now be utilized more efficiently.”

“It’s a comfortable drill to operate and it’s also very good hydraulics, so everything is on the screen,” says Mlongeni, a driller since 2007 when he started on Sandvik D25KS. “I like drilling on auto with this new rig. There are fewer controls. On the D25, you have to hold a lever until the hole is finished.”

“The auto-drilling and auto-levelling, I like that,” she says. “It’s very quick. You can make metres just like that in an hour.”

Improved access to the mast area, including walkway handrails, allows for safer maintenance access and inspections without working at height hazards.

“This is definitely a major benefit and will be a standard requirement for the future,” Botsheleng says. “It makes it very easy to service the machine and improves safety as well.”

Operating costs have been “way below budget” according to Botsheleng and the drill routinely finishes its benches ahead of schedule.

“The maintainability is excellent and maintenance costs are highly competitive,” Botsheleng says. “Utilization is higher than previous drills we’ve operated.”

The new rig surpassed 5,000 engine hours in January 2020 and continues to impress mine management.

“The records are there,” Botsheleng says. “The drill has drilled 1,000 metres a day. The machine was parked for two weeks because it has completed its area that’s been allocated. So the machine is doing very, very well. I mean, a thousand metres a day? You’d be stupid not to buy the drill.”