It’s a common sentiment across the Chilean mining industry. The rock is so hard and abrasive here that many mines view Mantos Blancos as the ultimate proving ground.

“Suppliers want to test their products here, and Chilean mines asks if machines were tried in Mantos Blancos, because if they work here, they work everywhere,” says Pablo Carrasco, Mantos Copper’s purchasing superintendent for Mantos Blancos and the company’s Mantoverde mine.

Eight hundred metres above sea level in the Atacama Desert – one of the most arid places on the planet – Mantos Blancos produces around 50,000 tonnes of fine copper each year. The mine runs an oxide circuit for leaching and a sulphide circuit for flotation. By increasing the processing capacity of its sulphide plant, Mantos Blancos plans to maintain current production levels through 2035.

The sulphide circuit consists of a primary crusher, a secondary crusher and three tertiary crushers in a closed circuit, for the production of a product approaching 98 percent smaller than ¼” (6.4mm) to supply the ball mills.

“The tertiary line is the backbone of the sulphide plant,” Carrasco says. “If this line doesn’t operate continuously, we have no production in the next stages.”

Mantos Blancos commissioned its first Sandvik crusher in 2001, a Sandvik CH660 that replaced an outdated competitor model. Three years later the mine replaced another obsolete competitor crusher, opting for a higher-capacity Sandvik CH870 – the first of that model installed anywhere.

Mantos Blancos is located 45 kilometres northeast of regional capital Antofagasta in northern Chile. Situated at an elevation of 800 metres in the arid Atacama Desert, the open-pit operation produces around 50,000 tonnes of fine copper each year.

The mine’s first Sandvik CH870 was such a success that Mantos Blancos installed another in 2006 to replace the smaller Sandvik CH660 and boost circuit capacity. By 2008, the mine had migrated to Sandvik CH870 in all three tertiary positions.

“The competitive advantage that Sandvik crushers have, something the rest of the market doesn’t offer, is that even having the machine working at its full potential, the crusher doesn’t present any problems,” says plant maintenance chief Luis Guerrero.

In recent years, Mantos Copper has grown increasingly interested in digitalization and the Industrial Internet of Things, and the potential efficiency and productivity benefits connected data can enable at a mass mining operation.

When an opportunity arose to implement connectivity in the all-important tertiary sulphide crushing line, Mantos Blancos seized it.

After a decade of reliable and productive operation, the mine upgraded its youngest Sandvik CH870 to a Sandvik CH870i. Mantos Blancos took advantage of Sandvik’s Reborn solution, a more cost-effective option than a new installation, since existing infrastructure and auxiliaries of the Sandvik CH870 could be re-utilized. The Sandvik CH870i Reborn, backed by a three-year extended warranty, was online in just two days.

“The Reborn solution allowed us to keep many components of the current machine, which are still perfectly useful,” Carrasco says. “The extended warranty, which includes periodic condition inspections, really puts our minds at ease.” 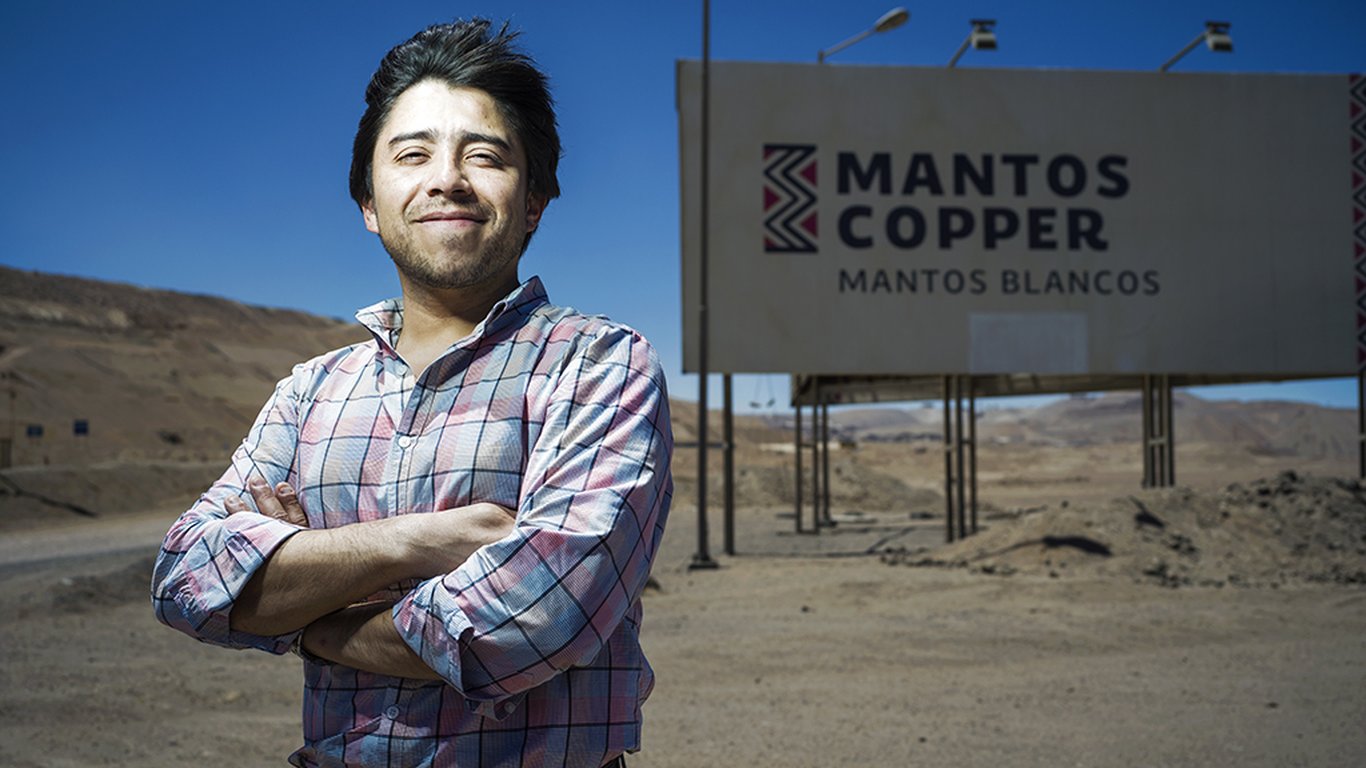 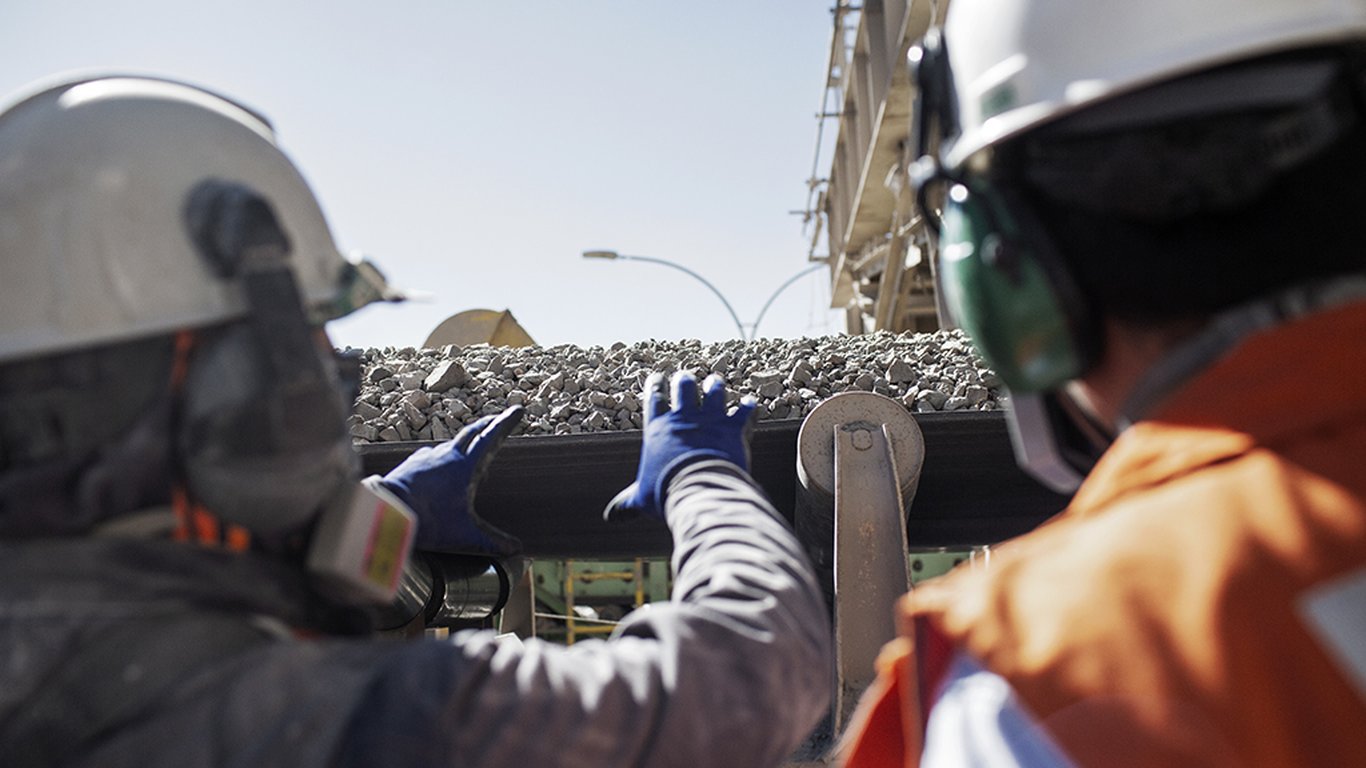 Mantos Blancos produces around 50,000 tonnes of fine copper each year.

Commissioned in June 2018, Sandvik CH870i features mechanical improvements such as a 65 percent stronger mainshaft than its predecessor, a significantly improved top and bottom shells and a better over-pressure system to further improve reliability. But the biggest benefits for Mantos Blancos have been digital.

The mine connected its new Sandvik CH870i via the My Sandvik customer portal, which enables Mantos Blancos to make fact-based decisions based on round-the-clock data access.

“My Sandvik makes crucial information available to the maintenance team and the operators, making it easier to make decisions,” Carrasco says.

“It ensures that we’re speaking the same language,” Guerrero says. “When we talk about demanding power from a machine, or high temperatures in a machine, or an uncrushable material that was detected in time, or the electric dump valve came into action, thus avoiding collateral damage, all that can be clarified, checked and analyzed with the online information. We also have early warnings of temperature and vibration. All that facilitates continuity. Early warnings help detect ongoing faults or controls that must be done to avoid certain faults. Was a bushing damaged due to uncrushable material or for another reason? When there’s no physical evidence, we can only know that through data.”

”Having data about our system online allows us to make decisions from the plant, the office or home

My Sandvik has helped Mantos Blancos improve transparency by making operational data visible online and across the organization.

Through digitalization, now we can better understand faults and learn from them. We need to take advantage of all this information to foresee certain situations and carry out better analysis. That’s the real benefit that comes with having information available.”

For Carrasco’s colleagues in the sulphide plant, operating the tertiary crushers at a minimum base power to achieve the desired product is essential.

“The machines must operate following the nominal values defined, no more, no less, always at the optimal point that utilizes the full potential of the machine within the safety range defined for the operation,” Guerrero says. “Digitalization can help us do that.”

My Sandvik also provides the mine access to crusher manuals and an e-commerce platform for ordering wear and spare parts, including a track-and-trace function that simplifies maintenance planning.

“It’s great to have online information about our parts and components needs through My Sandvik,” Guerrero says. “We can immediately check and register our replacement needs. Having an e-commerce platform makes getting replacement parts easier and faster. All logistical tasks are simplified. The channel shortens, so response time improves.”

Sandvik has helped Mantos Blancos ensure continuity in the processing plant for nearly two decades. At a mine where abrasive material creates premature and drastic wear on liners and other parts, Sandvik has continuously improved and optimized its crushing chamber solutions to extend lifetime without sacrificing product size distribution.

“Sandvik has adapted to the needs of our plant over the years,” Guerrero says. “They’ve understood the different needs Mantos Copper has, mainly because of the unique mineral toughness.”

The mine used to change liners as often as weekly but Sandvik worked with Mantos Blancos to extend utilization cycles to 21 days.

“The improvements Sandvik has made help, first of all, from a cost perspective, because the lining is less worn,” Carrasco says. “There are fewer interruptions. The plant had to stop working to change liners so often, so it benefits continuity to have longer liner cycles, and this has a direct impact on production.”

Mantos Blancos requested permanent Sandvik assistance at site, which has maximized power and pressure in the crushers and resulted in a finer product. Under a three-year Advisory service contract, Sandvik supplies spare and wear parts and conducts weekly inspections in the plant.

“We decided to keep working shoulder to shoulder with Sandvik because of the technical support they offer,” Guerrero says. “What we get under the agreement is Sandvik’s expertise, their support, which is what we look for and what differentiates Sandvik from other suppliers. Sandvik is our strategic partner. We don’t only want the machine, we also want all the supplier’s expertise. With the help of that experience and knowledge, we are able to ensure continuity.”

“That’s the added value that makes the difference,” Carrasco says. “We couldn’t get that from a non-OEM supplier. We feel Sandvik really supports us, and that’s what makes this relationship successful. Sandvik has helped us upgrade our equipment and maintain a high operation standard in our sulphide plant. Sandvik equipment has brought a new life to our sulphide crushing process.”