The Riotinto Mines in south-western Spain are among the world’s oldest. The area in northern Andalusia is part of the 350-million-year-old, 250-kilometre long Iberian pyrite belt, stretching from western Portugal to Seville, Spain, and has served as a major source of European copper in both ancient and modern times.

The copper mine, located 65 kilometres north-west of Seville, was decommissioned in 2001 due to low metal prices. Atalaya brought the mine back into operation in 2015 following two years of rehabilitation.

The current open-pit mine commenced commercial production in February 2016 at an initial annual processing rate of 5 million tonnes. Atalaya completed construction of an expansion project in June 2019 to nearly double processing capacity to the current 9.5 million tonnes.

The company is now undertaking a project to further boost annual processing capacity to 15 million tonnes, an expansion that will increase demands on INSERSA.

“It is a very important challenge for INSERSA to contribute to growing a mine of this size, safely and sustainably,” says Manuel Martín, head of INSERSA’s works group. “Bringing the mine back to life after 15 years, our focus is increasing extraction volumes and reducing operating costs, thus producing a quality concentrate.”

Fernando Díaz Riopa, Atalaya’s mine manager at Proyecto Riotinto, says the company has relied on Sandvik surface drill rigs since it began preparations to reopen the operation in 2015.

Pantera DP1500i is a crawler-based surface top hammer drill rig, for 89- to 152-millimetre (3.5- to 6-inch) hole sizes. Ideal for production or pre-split drilling in open pit mines or large quarries, the intelligent rig features an advanced drilling control system with easy-to-use user interface and a robust rock drill with high penetration rates, all combined with excellent fuel efficiency. Additionally, the rig can be equipped with GPS navigation (TIM3D) for improved drilling accuracy.

“Good drilling and blasting ultimately improves yields in the processing plant,” Riopa says. “We continue placing our trust in Sandvik for surface drilling, as it provides good results. At Atalaya we are happy with INSERSA and with the equipment from Sandvik.”

INSERSA has partnered with Sandvik for more than a decade. The contractor’s mobile fleet features more than 30 pieces of Sandvik equipment.

“INSERSA and Sandvik have a relationship of collaboration and trust,” Martín says. “Sandvik delivers high-quality equipment and strong aftermarket service.”

INSERSA production manager Laureano Pazos Pérez says it was natural for INSERSA to reach out to Sandvik during its means assessment for Proyecto Riotinto.

“Once monthly drilling rates, bench heights and drilling diameters were determined, we initiated a search based on these parameters for reliable equipment with short delivery times and aftermarket support,” Pérez says. “Sandvik’s advice and consultancy were key to our choice.”

Sandvik proposed Pantera DP1500i as the ideal drill rig for the operation due to its reliability, ease of maintenance and low fuel consumption. 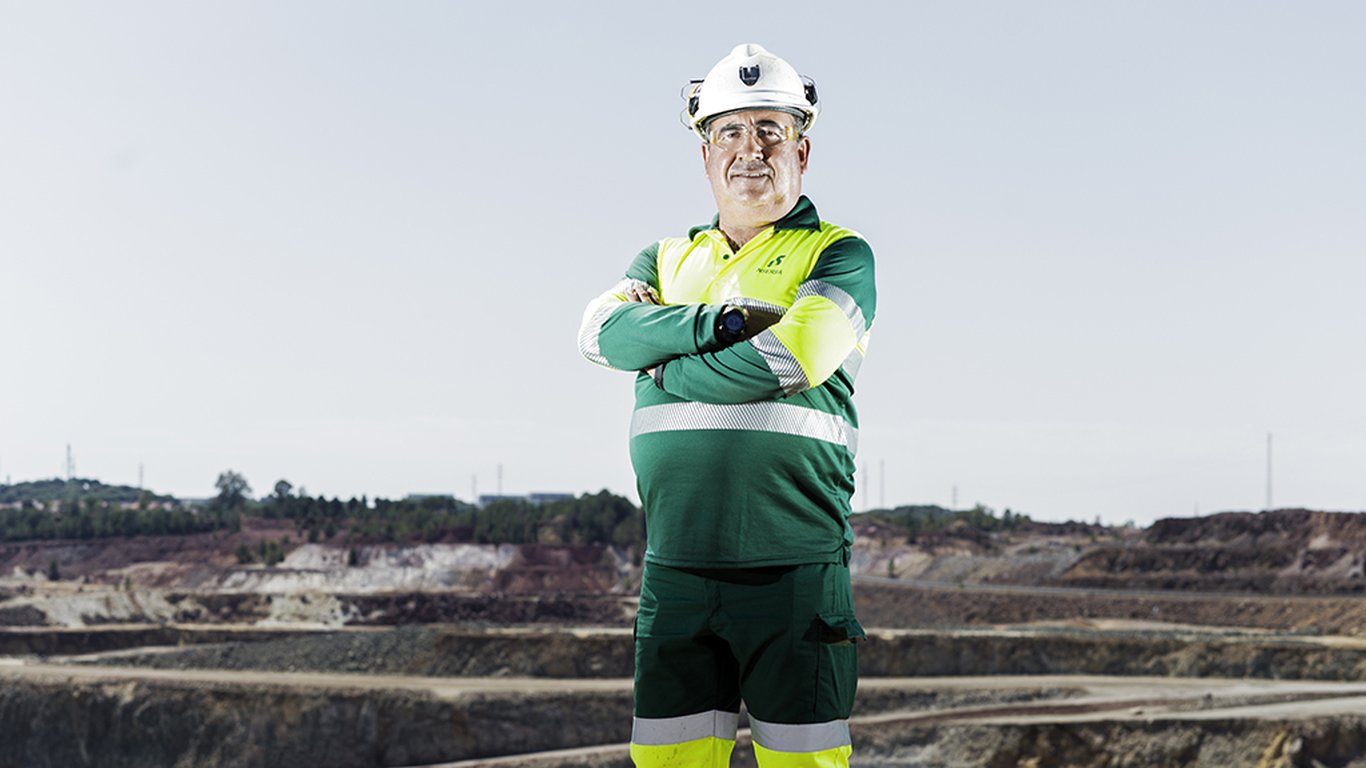 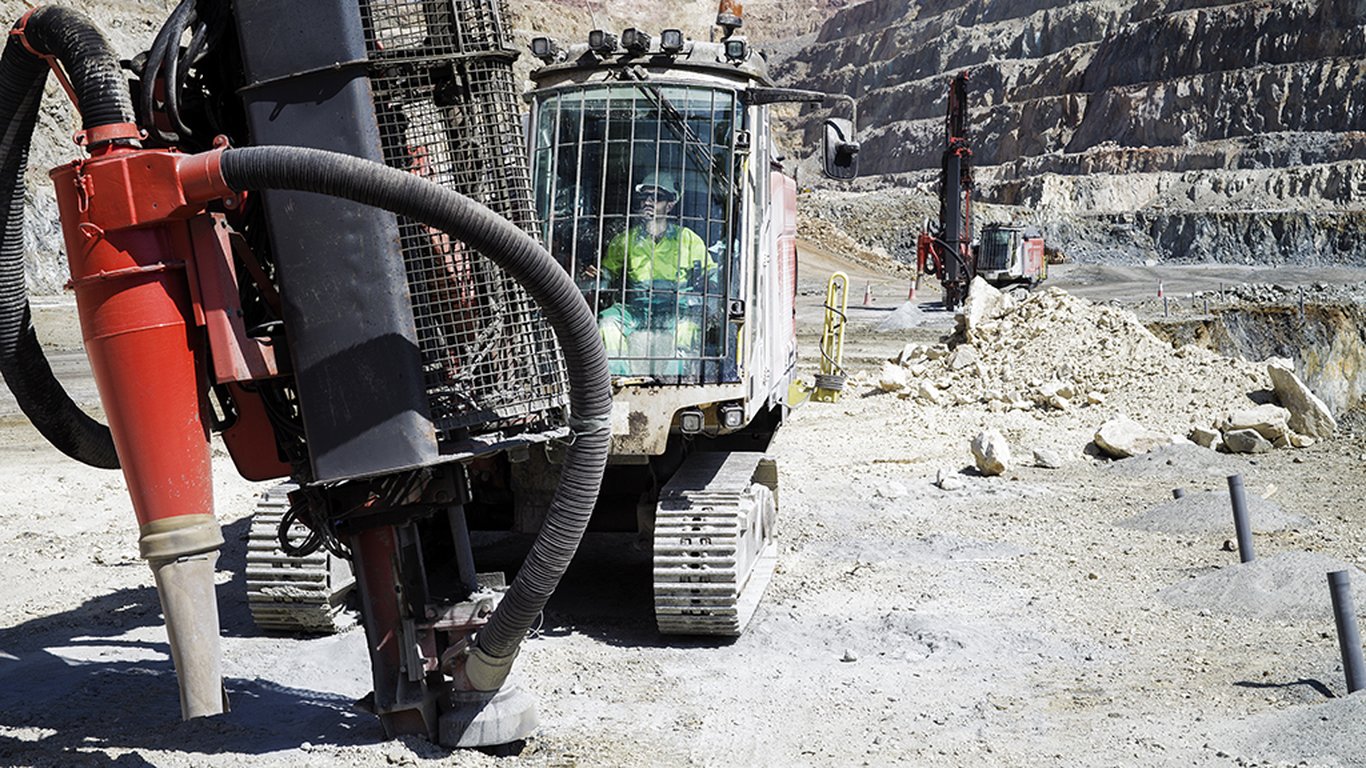 “Pantera DP1500i is perfectly matched to our drilling application,” Pérez says. “It is reliable, robust, easy to handle and simple to maintain. The drilling is very efficient and we reach our production goals easily.”

INSERSA operates six Pantera DP1500i drill rigs, as well as a Sandvik DP900 for secondary breaking. The six Pantera rigs, coupled with Sandvik GT60 rock tools, drill a monthly average of around 55,000 metres. That number is expected to increase as the mine further ramps up production.

“The features of Pantera DP1500i that made it perfect for our operation are its highly proven robustness, simple mechanics and reliability,” Pérez says. “One of the most important options of Pantera DP1500i is its modern GPS positioning system for increased efficiency and operator safety.”

“They no longer need to perform tasks like measuring the holes for depth, as they can now do it with the machine,” he says. “It improves the blasting, the floors, the benches, which are very important for us to get right.”

European copper miner Atalaya Mining produces copper concentrates and silver byproduct at its wholly owned Proyecto Riotinto site in southwest Spain. The mine holds 197 million tonnes of ore containing 822,000 tonnes of copper. Atalaya Mining also has a phased, earn-in agreement to acquire up to 80 percent ownership of Proyecto Touro, a brownfield copper project in northwestern Spain which is at the permitting stage.

The Pantera DP1500i drills at Proyecto Riotinto were initially purchased for 6-inch holes, but the drilling diameter was reduced to 4.5 inches in an effort to improve granulometry.

“We typically drill smaller diameters now due to the hardness of the ore, but these drills can handle greater diameters with ease,” Martín says. “They have low maintenance costs and are very safe machines which the operators can trust. Over the years, Sandvik has offered the solutions best suited to meet INSERSA’s needs.”

“The drills’ availability and reliability are high and the performance exceeds our expectations,” Martín says. “Pantera DP1500i allows us to achieve our production targets with ease.”