In an ore drive 240 metres below the surface, Barminco jumbo operator Carl Chrisp drives a bolt into a pre-drilled borehole. With a simple twist, he anchors it. He doesn’t need to inject any chemicals or grout. He won’t have to come back later to tension up the rebar, either.

“Life is a lot easier with these bolts,” Chrisp says.

The Sandvik Mechanical Dynamic (MD) bolt has revolutionized ground support for Barminco at MMG’s Dugald River mine. Dugald River will be one of the world’s top 10 zinc mines at full production, and the operation is ramping up faster than expected. It achieved commercial production in May 2018 – less than five months after the first concentrate was produced as part of commissioning activities.

Barminco has been instrumental in developing Dugald River since it won a 2012 contract to advance two exploration declines and establish production levels and other infrastructure. A Barminco jumbo crew set a new single-month world record at the project in April 2013, developing 700.4 metres with one twin-boom Sandvik jumbo and in-cycle shotcrete.

That contract was extended to include trial stoping and additional development, with all headings supported by shotcrete and encapsulated resin bolts.

In 2016 Barminco was awarded a new, five-year contract covering development and production. The new contract’s development scope included an ambitious monthly target of more than 900 metres using two Sandvik jumbos. At the same time, MMG decided to transition from shotcrete to mesh support in 90 percent of the mine’s headings in an effort to cut costs while maintaining efficiency.

Not only did the new solution need to satisfy Barminco’s own requirements for efficient and reliable installation, it also had to meet a selective list of criteria established by MMG, including considerations such as bolt life and load capacity.

The Sandvik Mechanical Dynamic (MD) bolt is a 47-millimetre-diameter friction bolt, reinforced with a 20-millimetre bar with a wedge arrangement at the top end. Once the bolt is fully driven into a hole, similar to a friction bolt, the bolt nut at the collar is rotated to activate the wedge to firmly anchor the bolt. The MD bolt can replace a range of different ground support systems such as resin bolts, stiff split sets and even cable bolting. Available in lengths from 1.8 to 3.0 metres, MD bolts are rated to hold up to 30 tonnes. An average of 30-45 bolt installations can be performed per hour.

Inspired by its success with the Sandvik MD bolt at its contract at MMG’s Rosebery mine in Tasmania, Barminco looked to implement the efficient single-pass solution at Dugald River.

“A lot of the risk assessments had already been done at Rosebery and some of our employees here had used the MD bolts there, so that made bringing it to Dugald River a little easier,” Murach says.

The first trial started in October 2016. Jumbo operators and management alike quickly gained confidence in the process and application.

“Operators and offsiders appreciated the ease of installation and reduction in unproductive time changing steels, since the MD bolt and split set require the same length and size drill steel,” Murach says. “It takes a lot of manual handling issues out of the way. We go from eight to 10 steel changes to two. Everything that we do for the operators that makes it easier for them, results in much better safety and performance outcomes.”

“The MD bolt is the ideal replacement for resin or grouted bolts,” Murach says. “They’re easy to install and they’re inherently safer. You can spend a couple of hours trying to get resin in a hole, whereas this bolt is so strong and easy to install you can just hammer through the broken ground.” 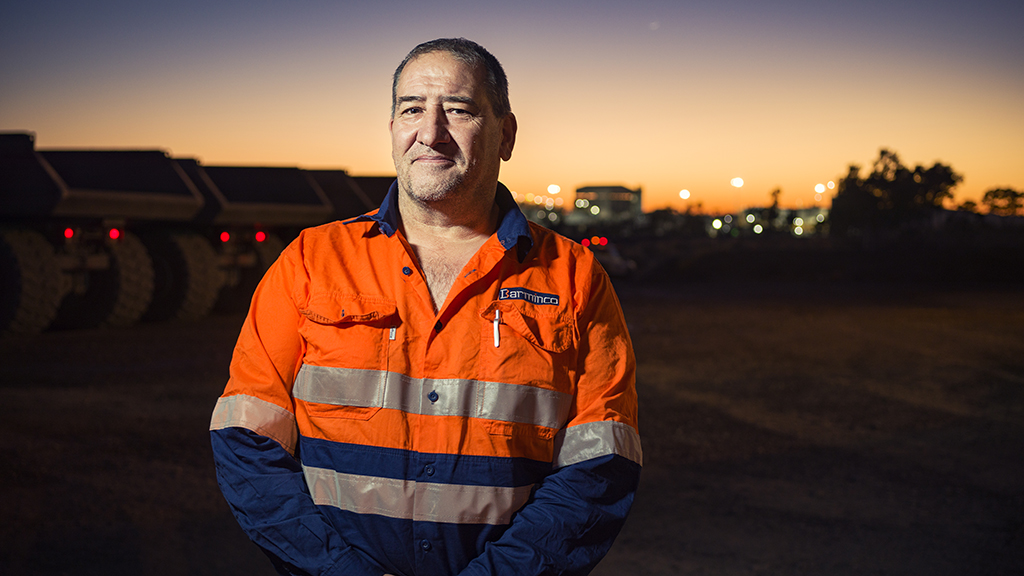 “When you’re using resin bolts, you drill the hole, then you put all the glues in and then you put all the bolts in,” Chrisp says. “The new solution means you just drill a hole and put a bolt in. It would take nearly three-and-a-half to four hours to bolt one heading and now you can cut it down to two hours.”

The reduction in cycle times has enabled Barminco to increase development rates by more than 50 percent. Since implementing the MD bolt, Barminco has developed as many as 950 metres in a month using two Sandvik jumbos and consistently achieves 800 metres.

“By changing over from shotcrete to full mesh with the assistance of Sandvik, we’ve achieved development rates that we wouldn’t have been able to without the introduction of the MD bolt at Dugald River,” Murach says.

“The new clamp we’ve developed with Sandvik will eliminate the need for several rock bolts, securing the mesh to an already installed bolt quickly and easily,” Murach says.

Established in 1989, Barminco is part of the Ausdrill Group, an ASX 200 company and Australia’s second largest integrated mining services provider. Barminco is a global leader in hard rock underground mining services and employs 3,500 people in operations across Australia, India and Africa.