On the safe side

Automation is sweeping the mining industry, enabling ever more productive applications. But how can safety standards keep up?

Automation is increasingly important in the mining industry, improving productivity and reducing maintenance costs. However, the complexity of the technology and the speed of development make it difficult to set standard safety regulations.

“Automation is relatively new to the mining industry, whereas it has been around for a long time for car manufacturers,” says functional safety expert Marcus Punch.

Mining can be much more complex than other industries, Punch says. “Therefore, a generic approach is better suited to it,” he says. “There are different techniques for coal, copper and gold, for example. There are also cultural differences that come into play. A mining company needs to work out what works for each organization.”

In pursuit of safety legislation

Ensuring safety for all equipment users and for the environment is a top priority for Sandvik Mining. New automation techniques create challenges and demand work from several stakeholders. With the technology being so complex as well as developing at such a rapid pace, it makes it difficult for safety standards to keep up. At present there really are no current standards available for mining automation. 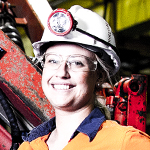 “Standards are normally generated based on what has come to be known and accepted as industry ‘best practice,’ and it takes time for the technology to mature, become widely used and be classed as proven technology within the mining industry,” says Ashleigh Braddock, vice president development and safety, automation and technology, Sandvik Mining. “The rate of change of these technologies is normally much faster than what legislation can keep up with.”

Sandvik Mining is determined and persistent in its efforts to do everything it can to improve safety around all processes and work environments. “A working group was formed in 2007 to generate an International Organization for Standardization (ISO) standard,” Braddock says. “All of the major OEMs who provide autonomous equipment participate. However, this is still in progress and unlikely to result in a finalized standard before 2015.”

In the absence of a standard, Sandvik Mining has used the functional safety standards IEC 61508, IEC 62061 and ISO 13849, which are used to fulfil both Australian and European legislation when designing programmable electronic safety-related systems. “Sandvik is unique in its offering of automation products because we design the safety-related parts of the system such as the Access Control System to this standard,” Braddock says.

The Access Control System isolates the autonomous area from the safe area where people are located by using dual light barriers that are armed before the system can be started. If these are tripped during operation by either a machine or pedestrians, the machines in that area are stopped, preventing any possible contact between the autonomous machine and a human being.

Evolution of standards
Each application needs its own safety requirements, rather than a solution for all automation. Punch believes that the standards will evolve as mining automation technology becomes more developed.

As a functional safety expert, Punch works closely with a range of mining companies. “I guide system integrators and people using equipment through the terminology and the myriad requirements of the various machinery safety and functional safety standards,” he says.

Standardized frameworks
Functional safety dictates the process whereby hazards are identified and controls, which rely on an electronic system, are put in place. There are a number of standards, but Punch says none of them provide a stand-alone safety framework for every industrial application. For complex projects, automation in particular, a mix of standards may need to be applied.

Because of the increasing use of automation in mines in Western Australia and the lack of regulation around this relatively new technology, a working group has been formed, facilitated by the Western Australia Mines Department. In a report, the group says that since automation is not regulated, incidents have gone unreported through the process that governs normal equipment or mine-related incidents. To get better regulation, the group has collected these incidents in one place.

Punch’s advice is to use frameworks while standard safety regulations are being developed. “Functional safety provides a framework in a risk-based manner,” he says. “Mining automation is still a fairly new technology, and there are also big differences between countries and individual mines. Therefore, it is easier to work with a framework, and each mine can work out the details. A general framework can be developed and then tweaked for each application.”

Knowledge is key
The main focus when safety regulations are developed is knowledge. “The project managers and engineers are very knowledgeable and know what needs to be in place,” Punch says. “However, that knowledge needs to be shared with senior management. Otherwise it is hard to get the right budget and order of priority. Important stuff will be neglected in the development process if the decision makers are not sure what is needed. You can’t create standards that don’t work for the people actually operating the automated systems.”