It’s no secret that miners work in tough environments, and large equipment operators can be subject to heavy vibrations for up to 12 hours a day. Reducing these vibrations is a key objective for Sandvik.

Occupational health therapist Barbara McPhee, author of Bad Vibrations: A Handbook on Whole Body Vibration Exposure in Mining, has long questioned whether the mining industry is doing enough to tackle the issue of “whole body vibrations.” She argues that miners are particularly vulnerable because they often have to work on rough roads in equipment that sometimes lacks adequate protection. Sometimes, the industry underestimates the seriousness of the impact of vibrations on workers’ health. “It’s very hard sometimes to make the call if you’re not aware of it or if you don’t understand it very well,” she says.
Over time, exposure to loud noise can lead to serious complications such as loss of balance, permanent hearing loss, stress, tinnitus and chronic fatigue. Constant vibrations can cause operator discomfort, spinal issues and neurological and vascular disorders.
“It seems that the spine fatigues with this constant vibration, but there are other types of disorders like gut disorders and circulatory disorders that may occur as a result of vibration,” McPhee explains.
The good news is that awareness of whole body vibrations is improving as both regulatory authorities and mining companies and suppliers step up their efforts to reduce the impact of noise and vibrations on mine workers. For example, Australia’s Department of Natural Resources and Mines for Queensland includes whole body vibrations in its health and safety priorities, recognizing the importance of the issue. Academic institutes are teaming up with mining companies to research the long-term impact and come up with tools such as whole body vibration measurement devices to reduce vibrational exposure.
Other companies, like Sandvik, have long been focusing on reducing the noise and vibration levels for operators using its equipment. Environment, Health and Safety (EHS) issues are part of the company’s DNA.
Minestories examines the development of four products from Sandvik and the work that’s gone into them to make them as noise- and vibration-friendly as possible for operators. Besides making life more comfortable for operators, these features often have additional benefits for the mine. Sometimes they can lengthen the lifespan of the equipment or deliver fuel savings. And most importantly, a healthier and happier worker can mean fewer lost time incidents, which makes for more efficient mining operations at the end of the day.

Rubber liners on the truck box

Often, the roads in mines are rough and drivers are shaken around, not to mention the noise level when manoeuvring heavy underground trucks. Using rubber liners on the bottom of the truck can reduce the strength of the vibrations and noise for the driver, as rubber absorbs much more energy than a steel liner. For example, if a rock hits a truck box with a steel lining, all the energy will hit the chassis, resulting in a loud bang and strong vibrations. If the truck has a rubber lining the impact is much quieter. 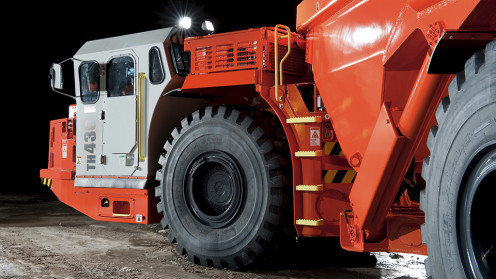 “Structural vibrations are around five times less compared to a steel lining,” says Oskar Larsson, product manager for wear protection at Sandvik. “The noise is cut by at least 15 decibels. The rubber liners reduce the noise from 95 decibels to less than 80 in the cabin, and from 100 decibels to around 80 when measured 30 metres away from the truck.”
During the development process, Sandvik conducts material tests to select the best rubber compound and thickness to minimize the level of noise and vibrations. “It’s a challenge to find the best balance between making sure the rubber reduces the impact of noise and vibrations as much as possible, and ensuring it can withstand abrasive wear and tear,” Larsson says.
Using a rubber lining on the truck box instead of a steel one also has benefits for mining companies. A Sandvik rubber lining lasts around five times longer than a steel lining, which means lower operating costs over time.

Launched in early 2015, the cabins on the new Sandvik DR461i drill rigs are insulated to dampen the noise level. As these drill rigs are engineered to operate in the harshest conditions, Sandvik used a company that specializes in noise and vibration reduction to design the cabin, and employed a third party to test the noise and vibration levels. All cabins are certified with the falling object protection system (FOPS). 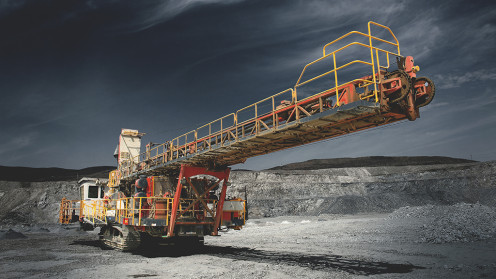 The cabin is mounted on vibration isolators, which limit the strength of the vibration reaching the operator’s seat; the seat itself has its own air suspension system.
To make the operator’s shift more pleasant and less tiring, there are more ergonomic controls in the armrest with automated functions. The Sandvik Compressor Management System isolates the compressor, eliminating the need to maintain pressure when not drilling. This option also has a benefit for the mine: it can deliver fuel savings of 20 to 35 percent. Less fuel also means less engine noise.
“This newly designed cabin is quieter than its predecessor because it has an improved airtight enclosure,” says Tab Siegrist, product line manager for surface drills at Sandvik Mining. “It also has top-grade insulation and a canopy-style roof. This canopy along with the windows helps to reduce heat inside the cabin. Our goal is to have these kinds of cabins on all our drills to ensure consistent quality and standards.”
Darlene Dutcher, product safety manager for surface drills at Sandvik Mining, adds, “Our standards are for noise to be less than 80 decibels. Vibration levels are also under acceptable levels according to ISO regulations. The next step will be to limit noise from the engines and compressors.”

Unlike other equipment that is stationary or moves slowly, underground loaders and haul trucks play a major role in mining operations – their efficiency directly influences the mine’s output. Equipment working underground operates in even tougher conditions – roofs on tunnels and roadways are often low, and because visibility and space are limited it’s inevitable that sometimes a vehicle will collide with the rock walls.
Making life comfortable for machine operators means they will be more relaxed and focused during their workshift, which can reduce the risk of accidents. Reducing the impact of noise and vibrations for the operator is an important part of this.
“This means we have to develop products that can tackle tough tasks but at the same time offer the best possible safety features for the operators and other people in the mine,” says Jani Tapanainen, load and haul project engineer. 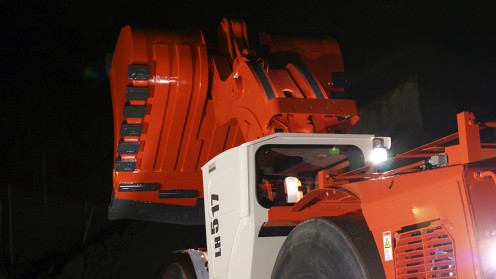 Sandvik haul trucks have an extensive suspension system – including rubber tyres, machine axle suspension and operator seat suspension – to reduce vibrations for the operator. The cabin fixing method and damping system are also part of the suspension system. Each suspension system is tested and fine-tuned in the best way so that it can work on different road conditions and cope with light to heavier vibrations.
The cabin installation method reduces noise entering the cabin through the machine’s frame, and sound insulation provides an extra layer of protection.
“We test the interior acoustics in the cabin during development,” Tapanainen says. “The materials we use on the interior and the layout of the cabin play a major role in soundproofing the inside of the cabin. The slightest gaps or small openings in the cabin’s frame can ruin the good sound insulation, so every door sealing, cable inlet and the like needs to be designed to fit as seamlessly as possible.”

Cutting through rock creates dust. Therefore, it’s important to make sure that the air containing suspended dust is fed into an appropriate exhaust system or dust extractor system to keep the air in the workplace as pollution-free as possible. Many Sandvik products have integrated onboard dust extractor systems. This is especially useful in areas where space is limited for external systems. For example, nearly all bolter miner orders for China are equipped with such filtering units.
Even though these air-filtering systems are important to improve air quality for workers, they can create additional noise. 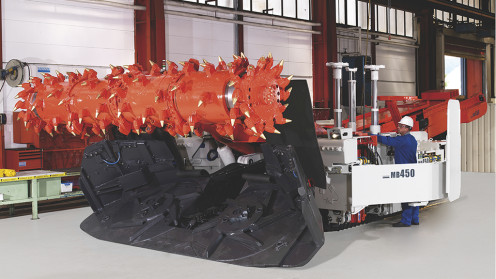 “To isolate the vibrations of the extractor fan from the scrubber box, Sandvik has applied an elastic-mounted fan, and we also developed a new kind of rear silencer,” says Egmont Lammer, product manager EHS underground coal and minerals. “These features are unique in our industry, and we have filed two patent applications.”
The new filtering systems have reduced noise levels by eight to 10 decibels, depending on the operator’s proximity to the machine.
“Our customers appreciate not only the benefits of suppressing and extracting dust, but also of keeping noise to a minimum level for their operators’ health and productivity,” Lammer says.